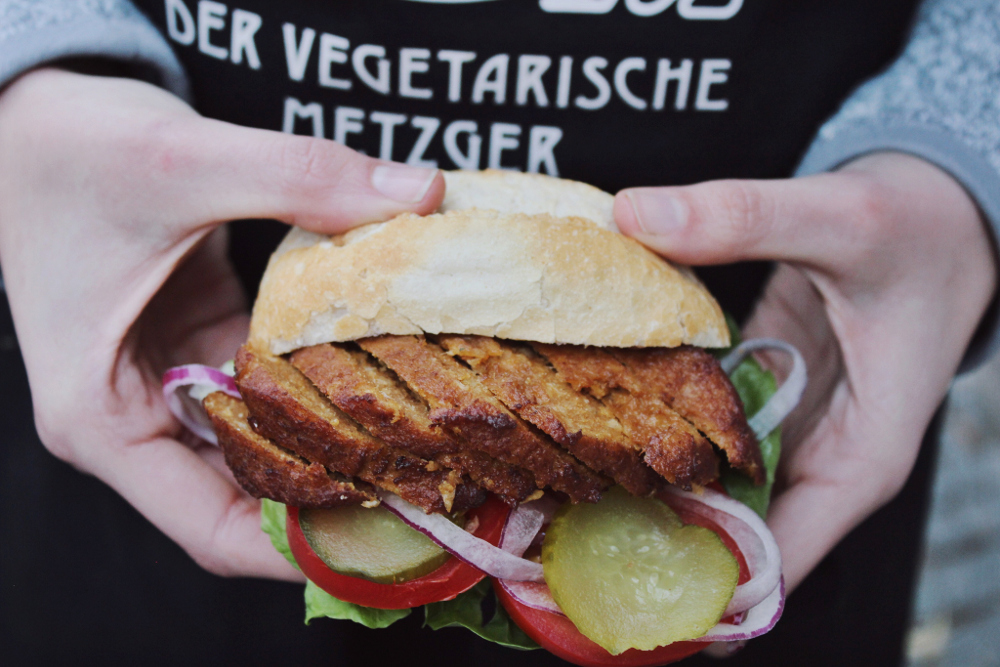 Vegan and vegetarian “butcher” shops are all the rage in Berlin, but whose fake meat reigns supreme? We put three to the test. Here: Kreuzberg’s Vegetarische Metzger, a Dutch import that produces some of the meatiest “meat” in the game. (Part 1: L’Herbivore and Part 2: Die Vetzgerei.)

It’s a little unfair to throw this one in the mix. Far from a small local producer, this is the Berlin branch of a Dutch fake meat titan whose products are developed in conjunction with scientists at Utrecht University and sold in 15 countries, from the UK to South Korea. But co-founder David Meyer is a native Berliner – and, honestly, any vegetarian with fast food cravings should try Vegetarische Metzger at least once.

Despite the name, Vegetarische Metzger bears far less resemblance to an actual butcher shop than its counterparts Die Vetzgerei and L’Herbivore. There’s a freezer filled with Vegetarische Metzger’s boxed-up products, which include soy-wheat-lupine burger patties (€2.90/2), “chicken” nuggets (€3.90), schwarma (€3.90) and bratwurst (€3.20/2), next to a counter where you can order them in their fast-food form.

Whether eaten at home or on the spot, this is the most convincing fake meat you can get in Berlin right now. The burgers, brats and nuggets are virtually indistinguishable from the animal-based versions sold at most fast food chains. (Which is both a compliment to Meyer and co. and a testament to the sad state of industrial meat; don’t expect these guys to replicate a Wagyu steak anytime soon.) The bad news? Not all of it is vegan. Quite a few products owe their considerable meatiness to whey protein and/or “free-range” egg whites, whatever that means in Holland these days. But their flagship chicken, made with pressed soy protein, is completely animal-free and shockingly toothsome. Try it at their Bergmannstraße “concept store” or their brand-new restaurant in Friedrichshain.