While Kreuzberg´s Markthalle IX gets all the attention (and crowds), Moabit´s 1891-founded Arminius Markthalle remains an under-the-radar gem for bourgeoise types, hipsters and old-school West Berliners – just like Moabit itself. Here´s a tour of the highlights.

Rosa Lisbert: The humble Alsatian Flammkuchen gets a hoity-toity twist courtesy of owners Lisa Meyer and Robert Havemann. Framed by a rectangular bar and a few tables, their brick beechwood oven fires up tartes both traditional (with Speck and caramelised onions, €8.50) and decidedly not (foie gras and truffle, €23.50). For meatier appetites, there’s Baeckeoffe, the traditional casserole with lamb, beef and pork, or a take on coq au vin with French black chicken and Riesling.

Gebetautomat: Want to say grace before your meal in Hindu, Korean or Plattdeutsch? Step inside what looks like a photo booth and press the button to hear one of 300 prayers in 65 languages from five world religions and a handful of smaller sects. An art project from Berliner Oliver Sturm, the free-to-use machine was installed here in 2011 and has five brethren around Europe. 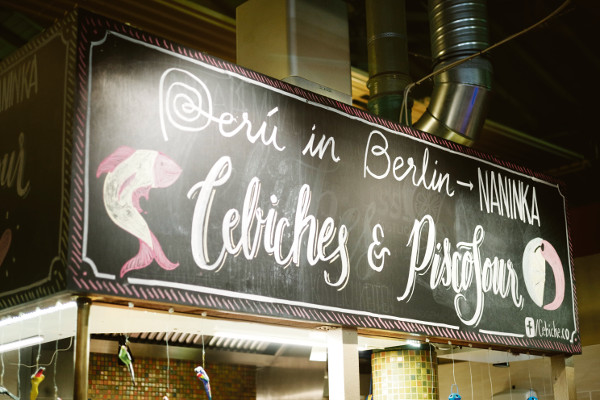 Naninka: Ceviche’s no longer the hot trend it felt like last year, but that doesn’t mean we can’t enjoy a good plate of marinated raw fish every now and again. The stand operated by German-Peruvian Antonio Brandauer and his wife Elizabeth offers cod, salmon, swordfish or (for the vegetarians) mango variations, with sweet potato chunks, crunchy corn and onions (€10.50-13.50); follow it up with a plate of lomo saltado (stir-fried beef with rice and fries, €13.90) or chase it down with a classic pisco sour (€7.50).

Fischladen: Like its cousin in Prenzlauer Berg, the Markthalle’s resident fish shop specialises in fish and chips, from €5.90 for a small version with catfish to €16.80 for a luxurious plate of fried cod, truffle fries and Parmesan. Pro tip: they also offer reasonably priced fusion sushi rolls on Thursdays and Fridays between 6-9 pm.

Pignut BBQ: One of the forerunners of Berlin’s current American barbecue trend, bearded German-American Chris O’Connor started smoking his ribs, brisket and pulled pork in the Markthalle in 2013. A plate of pulled pork with two sides (options include fries, coleslaw or beans) will run you €10.50; if it’s breakfast you’re after, the American-style pancakes,which cost €5/plate and are served on Saturdays between 10am-12pm only, have gained a fanatic cult following.

Die Brutzel-Ecke: Enough of this fancy nonsense – where do the real Berliners eat? At this time-warp of a stand operated by one Werner König, where dishes like Sulze (head cheese, served with potatoes and remoulade for €3.20) and Mett-Brötchen (bread rolls with raw sausage and onions, €0.90) never go out of style. A less exotic plate of Bouletten (grilled meat patties) runs €3.20.

Drei Damen vom Grill: If you’re an old-school Wessi, you can get a nostalgic kick out of seeing the location where the eponymous ARD show, about three generations of women running a currywurst stand, was filmed between 1976-1991. The rest of you can get, well, a currywurst (€2.20).

Brewbaker: Part of the first generation of craft beer nerds in Berlin, Braumeister Matthias Schwab moved brewing operations out of the Markthalle in 2013, but still runs a stand where you can try five of his signature brews (0.1L each) for €7, or commit to a pilsner, Weisse or 9 percent ABV “Berliner Blut” for between €2.40-5.80.

Die Mutter aller Tische: We wish we were as excited about anything as the Markthalle is about possessing “Berlin’s longest table!”. Part of a “living room” area served by Fischladen and the Austrian bistro Hofladen, it bears an impressive brunch spread on Saturdays, which you can partake in for a hefty €19.90 – or €38 including a glass of French cremant and access to dishes like Eggs Benedict and veal schnitzel.