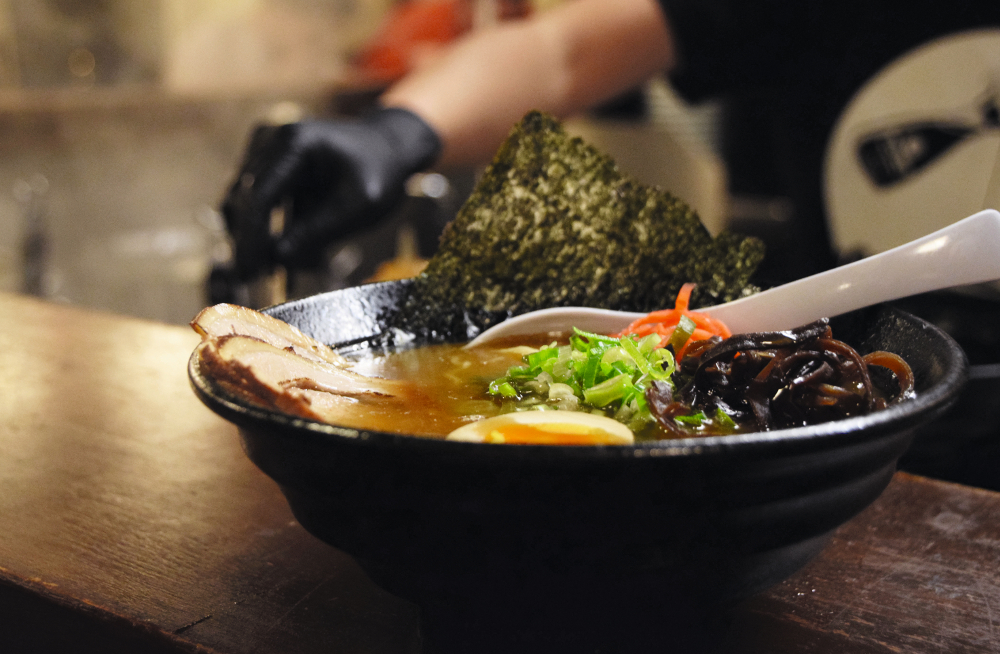 February is the month to stuff your face with bowl after bowl of chewy noodles and creamy broth. Jane Silver tried five comfort food contenders.

Remember when most Berliners couldn’t tell their tonkotsu (a milky pork-bone broth) from their tan tan (a spicy sesame broth with ground meat)? Things are changing, with multiple new entrants infiltrating the crowded ramen landscape. And we’ll come right out and say it: our favourite is Hako in Friedrichshain. It’s the pure gestalt of the place: the broth-scented steam that fogs up your glasses when you enter, the bandana-clad cooks boiling batches of homemade noodles in the wood-framed open kitchen and the long counters at which you can slurp solo while reading manga like a good salaryman or -woman. In pure Japanese-ness, it’s second only to Sapporo-via-Düsseldorf import Takumi Nine, with shorter wait times and more reasonable prices.

We’re partial to the tonkotsu gyokai, a style of dish rare in Berlin with a murky broth made from pork and dried sardines. The combo of meaty savouriness and fishy funk gives you umami for days without overloading you on salt or fat. Finished off with thick chashu (braised pork belly) slices, wood ear mushrooms and pickled ginger, it’s worth every cent of its €10 price tag. Vegans aren’t missing out… much. Four meat-free variations use shiitake mushrooms, seaweed and miso to achieve a similar depth of flavour, with plentiful toppings and the same lightly crimped noodles that stay al dente till the very bottom of the bowl.

Often mentioned in the same breath as Hako is its Boxi neighbour, Ramen x Ramen. But the bowls here just aren’t in the same league. Our tan tan men (€9.50) was nicely spicy but way too heavy to finish, with thick noodles drowned in a sludge of chilli oil, sesame seeds and salty ground pork. The vegan soups, listed on a separate menu, fared somewhat better, with soy milk adding a silky mouthfeel to the miso tonkotsu version – but the baloney-like seitan chashu failed to convince. If you end up there, the one must-order is the korokke: crispy fried croquettes filled with cheese or sweet potato and drizzled with a sweet-salty glaze.

Meanwhile in Kreuzberg, the ramen-ya to watch is MoriMori. With its narrow, bamboo-lined storefront, it’s the latest addition to Oranienstraße’s gentrifying food scene. Opened late last year, it’s earned accolades for its chashu, and rightfully so – the thinly sliced pork pin-wheels, braised then blowtorched, are as tender as they are flavour- packed. Combine that with a creamy, slow-cooked miso tonkotsu broth, toothsome noodles, meaty king oyster mushrooms and both halves of a molten-centred boiled egg and you’ve got a solid, very filling bowl. If there’s one knock, it’s the steepish price (€10-12); if there’s another, it’s the dearth of vegetarian options (there’s only one, and it feels like an afterthought). But meat eaters will be more than happy – even the hardcore Kotti types who rant about expats invading their Kiez while shelling edamame without a trace of irony.