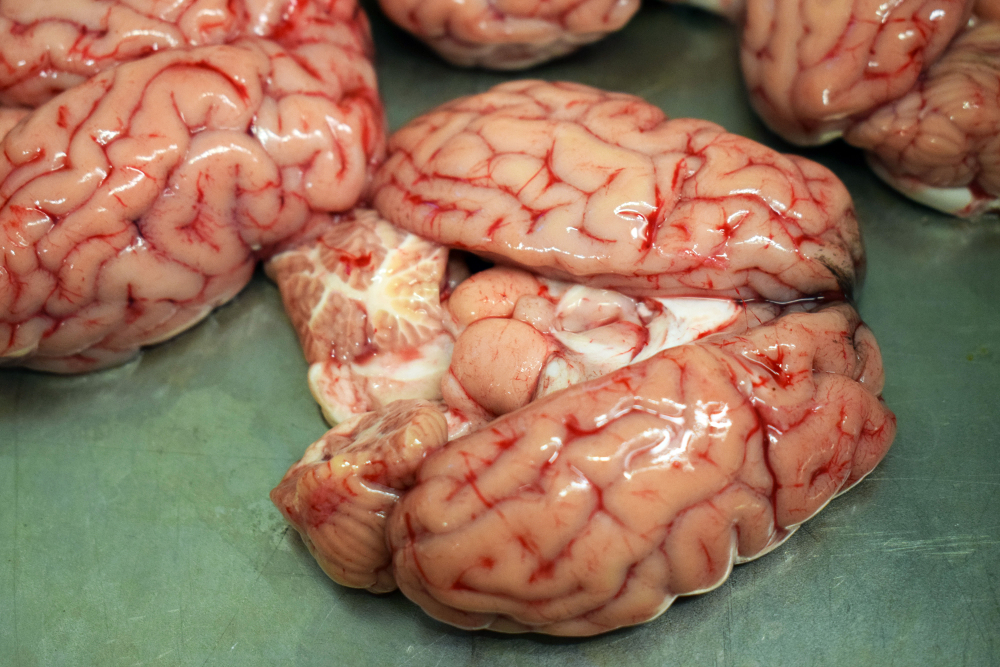 Jane Silver goes on a quest to satisfy her hunger for brains in Berlin.

When it comes to food, I don’t have a lot of no-go zones. Pig intestines, chicken hearts, duck tongues, squid guts – I’ve eaten ‘em all. Brains, though, always squicked me out. I realise it’s irrational. Animal brains are part of nearly every country’s traditional cuisine, from Mexican tacos de sesos to Germany’s own Hirn mit Ei. And if you’re going to eat an animal, you might as well go all the way, right?

But where to find brain? The turn-of-the-century mad cow crisis all but scrubbed the organ from Berlin’s menus; these days, the chances of contracting the disease are close to nil, but it’s still illegal to sell bovine brains in Germany. Sheep, though, are fair game – and sheep’s brain, aka mokh, happens to be a beloved Syrian speciality.

When I heard that Alagami recently began offering a secret sheep-offal menu on Tuesdays and Saturdays, I headed straight to the Sonnenallee schwarma shop. I knew I was on the right track when I saw the skulls. Two of them, with peppers for horns and radishes in their empty eye sockets, topped a steam tray full of rice-stuffed intestines, tongues, feet and – jackpot – brains. “Just mokh?” the guy behind the counter asked, eyebrows raised. Usually it’s part of a €15 platter with the other sheepy bits. “Just mokh,” I said.

With a shrug, his colleague retrieved a fist-sized greyish lobe from the steam tray, roughly chopped it up and plopped it on a platter with some herbs. I’d hoped the first brain I ate would be deep-fried or smothered in sauce. This one had been boiled with onions and spices, but otherwise looked straight out of Anatomy 101. I closed my eyes and took a bite. It was softer than I expected, like fatty, organ-flavored custard. Hypothetically I could see the appeal, but the bitter aftertaste, unctuous mouth-coating quality and terrifying optics were turning me off big-time. By pilfering bread and spreads from my vegetarian dining partner’s Falafelteller, I could make brain sandwiches that disguised the thing enough for me to get about two-thirds of it down. “Geschmeckt?” smirked the counter guy. Had I been trolled? But no, someone else came in and ordered the full organ-meat monty, and his brain was given the same (lack of) treatment.

The next afternoon, still a little queasy, I met up with Michel of the eponymous Chez Michel in Kreuzberg. He’s hardly served brain in seven years running his Kotti bistro, but tipped by our editor who boasted of the French chef’s mastery at cooking cervelle de veau, he offered to import one from his French butcher and give me veal brain to try. “This is going to be better,” said a confident Michel after I mentioned my experience at Alagami. Cervelle requires patience and preparation, he explained. He’d already removed the blood vessels, blanched the brain in boiling water and soaked it in vinegar. Now he coated the bite-sized pieces in flour and sautéed them in a lemon-butter sauce. As the brain sizzled, Michel admitted he didn’t eat this dish all that often, being more partial to tete de veaux – “it’s when you take a calf’s head, remove the skull, roll the whole thing up with string and cook that. Every so often I’ll call up a friend and we’ll split one.”

Plated with lemon wedges, fingerling potatoes and capers, these golden-brown brain nuggets were a sight more enticing than Alagami’s. To my relief they were mild and creamy, the offal undercurrent tamed by the vinegar bath – overall, as straightforwardly tasty as the rest of Michel’s traditional French fare. Not something you’d want to gorge yourself on, but in France it’s usually an appetizer anyway. Intrepid eaters can request cervelle a week in advance for €15, or keep an eye out for other organ-meat specials. “I’ll call you next time I have kidneys,” Michel promised as I headed out. “Or rabbit liver! Everyone loved that last time.”

My last stop was Berlin’s most obvious brain-eating destination: Herz und Niere, the four-year-old Graefekiez restaurant known for its nose-to-tail ethos. Available in vegetarian, offal-free or offal-only variations, Christoph Hauser and Michael Köhle’s four- to eight-course Überraschungsmenü (from €50) depends fully on the yields of the farmers, butchers and fishermen they work with. Serendipitously, their lamb supplier in Müritz had sent over a batch of brains just that week. “We’ve served pig brain here before, but it doesn’t taste like much. Lamb is much more interesting,” Christoph assured me. I followed him into the kitchen, and at this point I was so inured to brain-eating that the sight of the pinkish organs, complete with cerebellum and brainstem, looked more cute than nauseating.

After giving the lobes a quick parboil, he flash-fried them in oil, adding a good scoop of butter at the end. Zucchini, cubed butternut squash, julienned apple and a chicken-based gravy finished off the dish. Harvested from a sheep just over a year old, this brain had a slightly firmer texture and a mellow yet unmistakably lamby flavour that paired wonderfully with the sweet squash and tart apple. It also looked very much like a brain. “We want our diners to know what they’re eating,” Christoph said. “We’re also serving bull testicles on tonight’s menu – and they look like testicles.” Brain is one of his favourite organ meats – along with Bries, sweetbreads – but he understands why Herz und Niere customers sometimes have an issue with it. “We always say, ‘Hirn essen ist eine Kopfsache.’” Eating brain is all in your head.

And my own head? I survived my week-long brain diet unscathed – in fact, I might now be healthier than ever thanks to all the B12 and omega-3 I consumed. But now that my curiosity’s been sated, I won’t be going out of my way to eat brains again anytime soon. At least until the next zombie apocalypse.