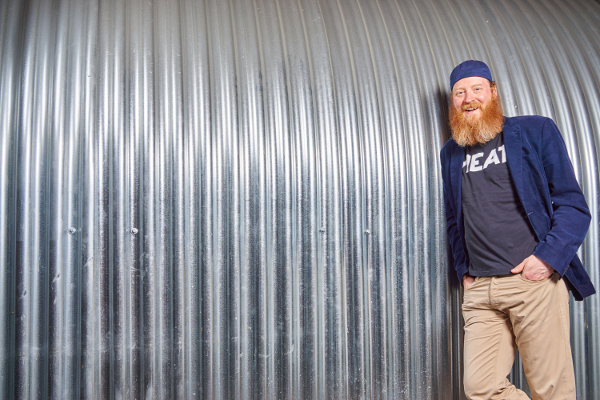 Christopher O’Connor of Pignut BBQ has been serving Alabama-style hickory-smoked meats and sides in Moabit’s Arminius Markthalle since before barbecue became a Berlin buzzword. The Berlin-born German-American chef fell in love with Southern food during a 15-year stint in the US while he was studying to be an opera singer, and used to joke with friends about bringing Alabamian recipes to his home country – until four years ago, when he returned to the Hauptstadt and the jokes became a reality. Last month, Pignut expanded into the prosperous lands of KaDeWe’s Feinschmecker floor; their Moabit stand remains open Wednesdays through Sundays.

What type of food do you cook?

We do Alabama-styled barbecue. That means hickory-smoked meat – ribs, sausages, pulled pork – and homemade sides of creamed corn, fries and coleslaw. We also make lemonades, milkshakes and pies. Everything is based on family recipes from Alabama.

That would be the ribs – because they’re damn good. The pulled pork is also really popular. There’s a lot of pulled pork in Germany at the moment, but most of it is horrible. People love to have it real fresh from our hickory smoker.

What is the food trend you hate the most?

I really hate places that pretend to be upscale. A place isn’t good just because they put microgreens on their plate. Craftsmanship is all that really matters to me – so it doesn’t matter if it’s fine dining or street food as long as the craft is good. So I hate places trying to be fancy where it’s obvious that there isn’t any craft behind the work.

Do you have a cooking tip for people?

When people are grilling meat, they should let it rest for a much longer period of time than they usually do. A lot of people start eating the meat right away because they want to. That’s a mistake, because it’s amazing how much better the meat gets if you let it rest.

A dining tip in Berlin (other than your own restaurant)?

There’s this tiny Chinese restaurant called Wu’s. The whole thing is family operated and I think it’s phenomenal. It’s funny because nobody really knows it because it’s all the way down by Krumme Lanke. But when you Google it, it’s all five stars and people who are in love with the food. I’d say it’s some of the best Asian food in town.

The best thing about owning a restaurant in Berlin?

That would have to be the multicultural people. Both staff and guests. The fact that we have so many diverse cultures working together and serving food to different kinds of people is really fun.

That would have to be the weather, which is frequently against us. I think if Pignut was in Southern France, we’d be selling a lot more barbecue.