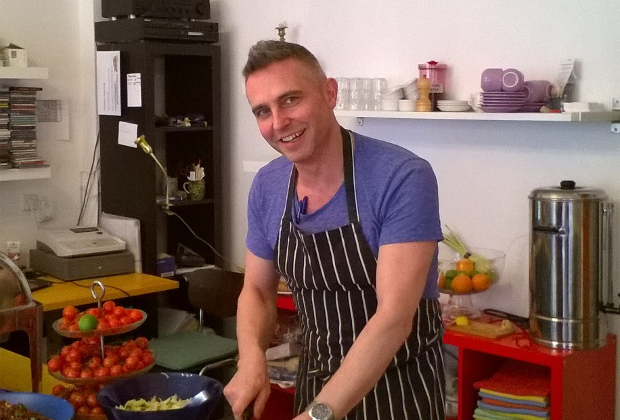 Twice a month, we shine a spotlight on our favourite chefs in the city. This time round it’s English/Irish expat Michael Kavanagh, the man behind all-day brunch joint Crunch Kantine.

Hyperactive Kavanagh works both the kitchen and the floor single-handedly in his “90 percent vegan” restaurant Crunch Kantine, putting Moabit on the map for one of the best brunch buffets in Berlin.

The food trend you hate the most?

Molecular gastronomy, which is a scientific approach to cooking where you investigate how the chemicals in different ingredients react to each other. When I was desperate for a job here in Berlin, I accepted one as a chef at a Michelin star restaurant – I won’t say which, but it‘s a famous one that all the politicians go to – and they practised this. They asked me to put chemicals in the food, and I refused. Food is for enjoying, not for playing. So they fired me.

The best-selling item at your restaurant?

People come for the buffet (all you can eat for €6), but my vegan soups are the best thing here. I made up the recipes myself; just taste them and you’ll know why they’re signature dishes.

Don’t skimp on the ingredients – people can always tell when you’re being lean. And then you should always let the different flavours come into their own. My favourite vegetarian restaurant is one in Cork, Ireland, called Paradiso and I’m still inspired by their chef Dennis Cotter, who got me started on vegan cooking.

A dining tip (other than your own restaurant)…

There is a place down this road (Siemensstraße) called Taste – it’s owned by a husband and wife. They describe the food as Singaporean fusion, but I would categorize it as modern Asian. They have an open kitchen, the wife is very beautiful and the food is just excellent.

The best thing about having a restaurant in Berlin?

I’ve been working for a long time in London where I also had my own restaurant, but I missed the variety of customers that you have in Berlin. I like it especially here in Moabit, where there aren’t too many tourists but just normal people. I like when people stay after eating and hang out, and even though Crunch Kantine has only been open for three months I already have many regulars. And then I have the best gastronomic supermarket in the world right across the street: Hamberger. It’s Aladdin’s cave for chefs.

I find it hard to think of any bad thing about running my restaurant here. Compared to my other Berlin work experiences, running Crunch Kantine is heaven. As my own boss I don’t have to compromise with the way I cook. If I have to say something though, it would be the dog shit on the pavement outside my door, even though I love dogs and allow them in the restaurant. But I have white floors…