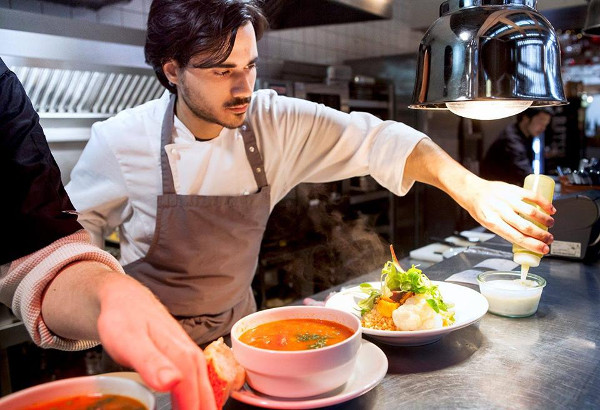 The Seafood Sundays pop-up at Birgit & Bier mixes a low-key atmosphere with high-quality seafood, and especially the latter is a matter close to Sina Sucuka’s heart. The 28-year-old Turkish chef wants to get customers to appreciate fresh and untreated products from sustainable suppliers. And so all the fish, crustaceans and bivalves on Seafood Sundays’ menu come from a small Dutch fishery where Sucuka got his hands dirty earlier this year. He always wants to be as close to his food as possible. And if that means going to the Netherlands to work with fishermen on one of Europe’s last wild oyster banks for a month and a half, then so be it.

What type of food do you cook?

I like to cook honest food. I’m a Turkish chef, but I’ve worked in five different countries in the past five years. Wherever I go, I like to use the produce at the location and respect the geography, the climate and the culture. And I like to combine and play with different styles.

At Seafood Sundays it’s my langoustine tail linguini. The recipe usually has garlic, olive oil, white wine, carrot, celery, tomato, fish stock – that’s pretty much it. The flavours are so intense and clean and langoustine tails are quite rare and expensive, so it’s kind of a delicacy. People are really surprised and happy to eat something they don’t usually have access to.

What’s the food trend you hate the most?

Pretentious food. Sometimes chefs add unnecessary techniques, inedible garnishes or freaky presentations just to wow people. They manipulate the food, fiddle with its textures and components and take it out of its natural form. That just makes it unapproachable. And sadly it also wastes a lot of food, because they just use one part of the entire item and then throw away the rest as “excess”.

Do you have a cooking tip?

Know your vendors! Try to not use supermarkets and find a fishmonger, for example, who cares about your food as much as you do. He can point you to a fish or a crustacean that you’ve never seen before because it’s in season – and give you tips on how to prepare it. These people know their products best, and that relationship will make you a better cook in time.

A dining tip in Berlin (other than your own restaurant)?

Bone Berlin in Markthalle IX. They only use bio animal proteins and purchase ethically – and their dishes are still affordable. You pay €5.50-8.50 for lunch, and it’s a good alternative to cheap industrial chicken or the döner shop around the corner.

The best thing about being a chef in Berlin?

Well… I’m Turkish, you know. At the dinner table we’re already talking about what we’re going to eat in the morning. Germans don’t function that way. In Berlin there’s no big established gastronomic culture – apart from currywurst, döner kebab and some average Vietnamese and Thai restaurants. That means people are unprejudiced and open to try new things. There are no cultural or mental barriers like in Turkey, where it’s not easy to feed people South Korean barbecue. Here you can show people new stuff and they really accept it well. And the food scene has really taken off in the last two years as well.

It’s also the lack of gastronomic culture, the flipside of the coin. A lot of people here see food as fuel and not so much as enjoyment and experience. They’d rather spend their money on other things. So sometimes it’s difficult to get people excited about quality food. They look at you, like: why is this so expensive? They’re not aware that they’re paying with their health and the destruction of the environment when they eat cheap, industrial food.