Who’s behind the new wave of Vietnamese food in Berlin? Three mini-empires, run by close-knit families who seem to strike gold with each new venture. We asked their bosses for the secret of their success.

The self-made king: Si An

Bright colours, plastic stools, kitsch displays of Saigon street market stalls, a Buddha decked in gold behind a mound of smoking incense in front of a spinning holographic (Buddhist) swastika in psychedelic greens, purples and blues… the décor at Mitte’s District Môt exemplifies the over-the top aesthetic Berlin has to come to expect from restaurateur, designer and chef Truong Si An. “Is this going to be a big feature?” he says as he sits down for our interview dressed in black, a cotton scarf knotted around his neck. “I hope you’ve done your homework on me!” He describes himself as “half-businessman, half-artist.”

Si An came to Germany with his family in 1981; as refugees fleeing post-war Saigon (now Ho Chi Minh City), they were welcomed here with open arms. After 15 years as a hotelier at Munich’s Four Seasons and Berlin’s Adlon and a two-year stint as partner at Mitte’s Monsieur Vuong, he opened his first restaurant, Si An, on Rykestraße in 2006. An über-tasteful space decorated with lanterns and paper cranes, it combines noodle soups, curries and daily changing specials from both his native south Vietnam and the country’s north. “The idea was to present Vietnamese cuisine as colourful, full of choice and interesting tastes,” he explains.

Emboldened by his success with the international Prenzlauer Berg set, he expanded his business to Mitte four years later with Chén Ché, an upmarket tearoom serving desserts like ché choi nuoc, rice balls filled with peanuts and chocolate in a coconut-mango sauce, alongside a wide variety of teas and iced brews. The aesthetic is just as larger-than-life as District Môt’s but in a different direction: huge hanging lanterns in rope nets, a plant-filled inner courtyard, piled colonial-era memorabilia including branded crockery (that’s also for sale).

He opened another, more modern restaurant, Chi Sing, that same year. But in 2013, perhaps sensing the growing hunger for “authentic” street food in Berlin, he shut it down and reopened it as District Môt. The restaurant’s menu is as colourful and adventurous as its look, boasting caramelised duck tongues and deep-fried silkworms. “We don’t compromise on the concept – we go 100 percent,” says Si An. “Even the napkins here, they’re toilet tissue, which is what you get on the street in Vietnam.” Authenticity or gimmickry? Either way it’s a hit with the trendy expat set, as is his latest venture, the garish fast-food shop Sixty Seven Junk Food. Spinning off of Môt’s contribution to the Burgers & Hip Hop festival, it specialises in bao burgers: a hamburger in a steamed Vietnamese bun, seasoned with traditional fish sauce.

Enticing menus and strong concepts aren’t always enough to keep a business afloat. “The costs go up every year,” Si An complains. “Taxes have gone up, the price of electricity and gas…” He keeps them down by hiring fewer staff than you’d expect for restaurants this size (but, he says, training them better and paying them more). And being part of Berlin’s 40,000-strong Vietnamese community has its advantages. “We can get good ingredients and fresh vegetables imported from Vietnam and Thailand every day, at a very good price.”

Family ties are another advantage, with Si An’s sister working as the business’s accountant and his younger brother running PR and marketing. “You get more energy from your family; they stay with you in the good times and the bad times,” he explains. But “it’s not really a family business,” he stresses. “I started it on my own; later, my family came and helped me. I’m the boss.” Si An is certain that his success has been instrumental in creating the current trend for Vietnamese food in the city. “Look, I’m the one in Berlin. I was doing it years before anyone else. Later, other Vietnamese people opening restaurants were copying us.” 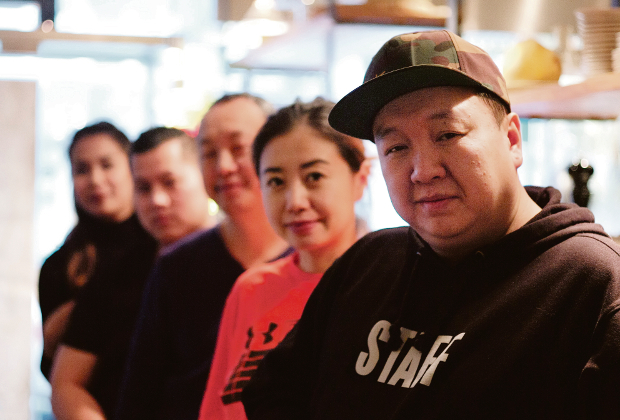 From sushi to pho: Duc Ngo

Whether or not Si An is right, it’s true that before the mid-2000s, pho and summer rolls were a rarity here. Instead, Vietnamese chefs stuck to more familiar culinary territory for Berliners. That was the case with Duc Ngo, who came to West Berlin from Hanoi at age five with his mother and aunts. When the sushi trend hit Europe, he trained as a sushi chef and started the upmarket Kuchi chain of restaurants with his cousin Phai Ngu and his younger brother Han Ngo in 1999. “It was a really nice time to open a restaurant. There was a lot of money in the market… People were spending a lot,” Ngo says, rotating sips of green tea with hits on an e-cigarette.

He and his family went on to open more Japanese restaurants across the city, including a second Kuchi and the popular Cocolo Ramen chain, as well as sushi bars in Baden Baden and Frankfurt. Last year saw two additions to the empire: the high-end Japanese spot 893 Ryotei, but also the family’s first Vietnamese restaurant, Madame Ngo in Charlottenburg. No “street food” gimmicks here; just tasteful, minimal décor and some of the best noodle soup on the market. Why pick up the ladle after all these years? “People travel more now, including second-generation Vietnamese visiting Vietnam. So there is a bigger market for authentic food, like Hanoi-style pho.”

Making the switch was “very easy,” explains Ngo, “because it’s home.” Still, he had to retrain with a chef from a restaurant in the Dong Xuan Center, the hub of Berlin’s northern Vietnamese population in Lichtenberg. “I learned how to make the perfect pho broth, a really clear bone stock; we cook it for 10 hours or more,” he says. Madame Ngo also serves the crispiest summer rolls in town, made with rice paper that’s posted directly from Hanoi by one of Ngo’s aunts.

Like Si An, Ngo complains of rising costs, stricter regulations and fiercer competition. But his experience sets him apart. “I’ve been in the business for 18 years already; I can regulate to keep things profitable, I can get better prices. Everything is easier for me than for the guy who starts new in 2016. So I don’t have to worry about making money, but rather making the best food that I can…” 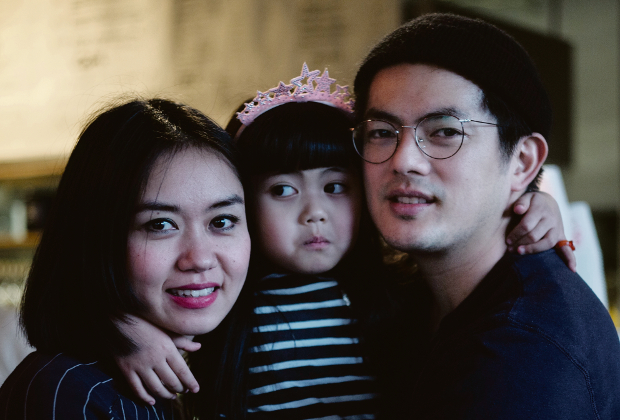 The next generation: Duc Nguyen and Hong Dao

Just metres away from the boutiques of Alte Schönhauser Straße, the Vietnamese café Quà Phê feels minimal and modern – there’s no tacky post-colonial Indo-China vibe, nor is there any of Si An’s decadent excess. In place of pho, there’s sticky rice with corn and mung beans, rice-flour crepes filled with sliced beef and chocolate-studded bao, served alongside traditional Vietnamese coffee.

The thirtysomething couple that owns the café might be of Vietnamese descent, but they’re Berliners at heart. Nguyen was born in Wilmersdorf, the son of a soldier and a singer who immigrated here in 1981; Dao came with her northern Vietnamese family in the early 1990s and is, as Duc affectionately puts it, “a Mitte girl. She thinks Kreuzberg is too dangerous.”

Dao actually comes from one of Berlin’s original Vietnamese restaurant families: the owners of Good Morning Vietnam, a more traditional spot serving rice plates and spring rolls in Mitte and Kreuzberg. She started working with them in her early twenties after a brief foray into fashion design; Nguyen joined her in 2007, a few years after the two met in a Berlin club. Despite the Daos making him a partner in the restaurant, it was clear to him that he’d have to strike out on his own. “They’re a bit older than us. They’re not up to date when it comes to interior design or social media. For me, it’s difficult to do things in this traditional way.”

At first, this meant leaving town. The two moved to Münster, where with the help of a German Vietnamese doctor, Nguyen opened the first Royals and Rice in 2011. The fusion-inflected yet authentic Vietnamese food and modern, trendy setting proved to be a popular formula among Westphalians, successful enough that Duc was able to embark on a passion project two years later: Han Coffee Roastery, which brought direct-trade beans from small Vietnamese farmers to Germany.

In 2014, they brought Royals and Rice to Berlin. “My cousin had a restaurant in Torstraße with his Chinese girlfriend; a Chinese all-you-can-eat place. It wasn’t very successful, and he was sad not to be doing Vietnamese food,” Nguyen says. “So we rebuilt his restaurant – we got rid of all the dragons, made it modern, dark and sparse – and we re-opened with a Vietnamese menu as the second Royals and Rice.”

At the same time, the couple opened Quà Phê on Dao’s initiative. “The city had become so much more international, so I thought the time was right to ‘spread the word’, show people what I know from childhood. The idea of combining it with a café is really quite obvious: Vietnam is one of the largest coffee exporters,” says the young woman. She stresses the contrast with her earlier days at Good Morning Vietnam. “Back then, 10 or 12 years ago, people didn’t like summer rolls that much. The texture was unusual, and they were cold… Now, Berliners are really into special, authentic Vietnamese food.”

Returning to Berlin as restaurateurs wasn’t easy; it meant causing tension with friends and family. Says Nguyen: “I’ve known the owner of [fusion-sushi restaurant] Du Du since I was a kid, we played basketball together. When I opened Royals and Rice in Mitte, he wouldn’t talk to me. And Hong’s family wouldn’t talk to me for a year.” They’re now back on speaking terms, thanks to Nguyen supplying Good Morning Vietnam with fresh-roasted coffee from Maison Han.

He recently sold his share in Torstraße’s Royals & Rice to his cousin and now splits his time between Münster and Berlin, where two brand-new ventures joined the family last year: Banh Mi Stable, a little shop next to Quà Phê serving pork and tofu baguette sandwiches with pickled carrots and herbs; and Maison Han, a hip breakfast place in Neukölln that specialises in rice crepes, egg dishes and Vietnamese sausage.

Both Duc and Hong credit working with family has been the secret to their success. The chief cook at the original Royals & Rice is Nguyen’s sister Han; the coffee roastery and Maison Han are named after her. Brothers, sisters and cousins help out across the businesses; time will tell if the couple’s four-year old daughter will join them. “Family means that you trust each other,” Nguyen explains. “We can do so much because good people work with us.”