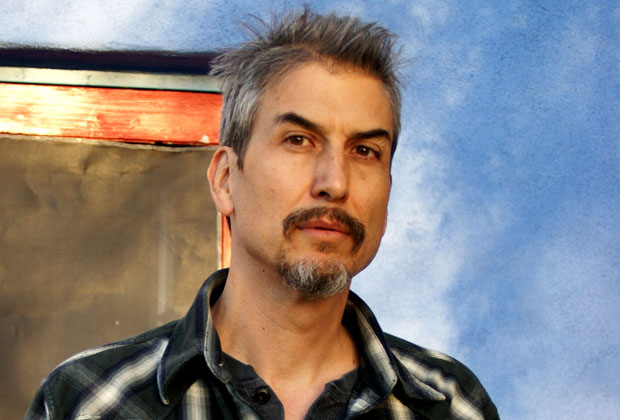 Over a quarter-century, as both solo artist and leader of Giant Sand – whose rhythm section would spin off into Calexico – Tucson, Arizona’s Howe Gelb has developed from alt-rock Neil Young worshiper into one of the finest and most varied songwriters working. He’s released more than 40 albums, blurring styles and recording with gypsies, a gospel choir and various what-have-yous.

The new Giant Sand album Blurry Blue Mountain (Fire Records) is just out and the band celebrates 25 years at Lido on November 24.

Can you give me a sound from your childhood?

One thing I remember is the tiles on the wall – I would play them as an instrument [plays the air and hums]. And, of course, they didn’t make any sounds: it was all in my head. I just imagined that this is what an instrument is gonna look like in the future.

The first record you purchased must have been interesting.

Oh that was a mistake! I went to get “Light My Fire” by The Doors – I heard it on the radio. So when I went down there they didn’t know what I was talkin’ about. It wasn’t a record store. It was a department store with a record department in it, so they didn’t know about music. And they sold me José Feliciano!

Your wife is Danish and you spend quite some time in Denmark. Does location influence your writing?

No, the writing happens everywhere. When I went up to Canada to do that Sno Angels record [2006’s Sno Angel Like You] I was writing like hell. It was minus 40 degrees. It gets so cold up there that the cold tries to get in from the walls – you can feel that it’s tryin’ to come in to get you, and when I looked out the window, there was this gigantic river and it was frozen and even the waterfalls were being eaten by the ice. It was such an amazing place. And all these songs were coming, but they weren’t about what I was seeing. Those songs were just keeping me warm, like nutritional value. It doesn’t matter where you are – if you’re a writer, you’re just an antenna.

Are you a good sleeper?

Yeah, I can sleep everywhere. I slept through most of the new record! The whole time we made it, everybody was falling asleep. The best time to write a song is when you’re just falling asleep. It’s the allowance of both realities. Things that go on in your dreams have nothing to do with gravity or time and then when you’re awake all your dreams seem absurd. So when you’re falling asleep, it’s the only time those brackish realities meet. And that’s how that record got done.

The one thing that happened on all three sessions was that everyone in the band fell asleep in the studio and then got up to play and then nodded off again. So we got this present delivered from that brackish time zone. I thought you can only write in there, but no, you can record in there too.

Are you a vivid dreamer?

Oh yeah. I can vividly dream with the best of them.