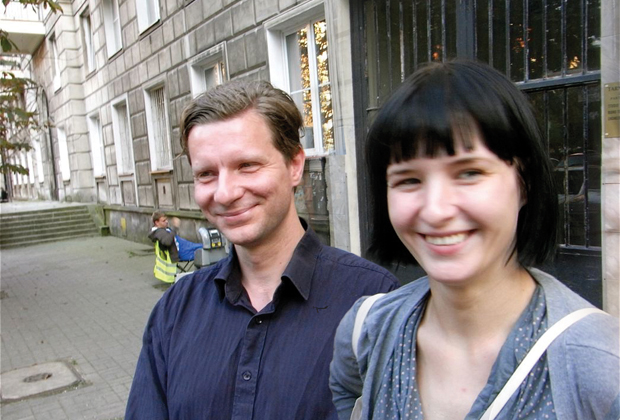 Warsaw-based Maciej Cieślak, founder of the My Shit in Your Coffee label, has been a seminal, if cranky, force on the Polish music scene for almost two decades, starting with the influential progressive punk act Ścianka. His current concern, Cieślak i Księżniczki (Cieślak and the Princesses), finds him fronting a large, all-girl string ensemble. How they’ll all fit into the basement of Madame Claude on Saturday, January 15, who can say? Cieślak’s partner, Natalia Fiedorczuk, might make it a bit easier, as her band, also performing, is pointedly named Natalie and the Loners.

Describe the Polish music scene before the end of communism.

Maciej Cieślak: Till communism collapsed you had to either work for the state or play in your buddy’s cellar. There was a punk rock wave since the beginning of the 1980s, not much in the media, but loads of young people were crazy about it. I wasn’t.

So you’ve felt the need to rebel against the past.

MC: During communist times I felt I lived in an artificial world, in some Big Uncle’s wardrobe. Big Uncle used to say: give up and I will let you live. It was a very sad feeling. Now I love it when I feel there’s some space for me to create my own world without asking for permission. And that is why many Polish people are so enthusiastic about capitalism. Because it is not fucking communism.

How does alcohol figure into your musical philosophy?

Natalia Fiedorczuk: Poland is an addictive nation. We’re eager for great emotional movements, rises and falls, but the internal conflict with our other national trait – being negative, critical and sceptical – leads to a highly neurotic attitude. A neurotic attitude leads to a need for instant relief. We’re a low-income country, so we can’t be those picturesque cocaine addicts with icons like Pete Doherty. We choose a cheap, practical solution, which leads us to the nearest liquor store. Does anyone care about Polish music besides the Poles?

I suspect only through Polanski films.

NF: Sometimes I do get emails or Facebook messages from Nigeria.

MC: I am a bit bored with only playing in Poland for 15 years. I know most of the clubs, people’s reactions to my music…I am very interested in how my music would work in other cultural circumstances. But the world is looking west. People in Poland know about music all over the world; there is no isolation of that kind.

NF: No, they are not parochial. They are mostly intelligent, sceptical, ironic young people. You’re twice their age but they know more about music than you. They write their critical blogs, so that you can check if your last song is more like chillwave or neo-gothic. I think they are nice and cool. All four of them.