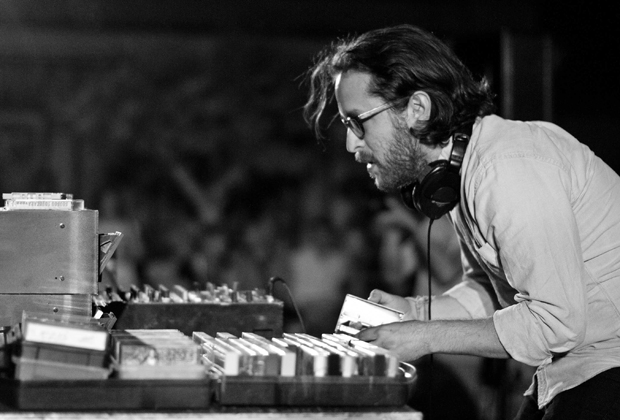 His new record label has Awesome written all over it, and he’ll be curating a night at this year’s Worldtronics Festival at Haus der Kulturen der Welt on Friday, December 2.

You’ve travelled extensively through Ghana, Mali, Burkina Faso and Togo. Were there notable differences in the scenes and influences in these countries?

Oh absolutely. Like in Ghana, a lot of the music that you would hear in the car, in a public place, in people’s houses or at funerals was very electronic in nature, based on beats that come in a large part from traditional dance songs.

When you go up to Mali, you hear a completely different type of music. They do rap as well, but there, rap sometimes incorporates more traditional instruments and also pop music. I mean, Mali is world-renowned for a variety of pop music. Ali Farka Touré paved the way for the idea of this sort of desert blues: it’s from Africa but also it sounds like the blues we heard from the Delta because, of course, both hip hop and the blues come from Africa by way of the Black Atlantic slave trade.

Did this spur your mission into West Africa’s vault of musical two-track history?

I went the first time in 2002, as I was studying ethnomusicology. I had never left America before and was interested in African music, so I went to Ghana. I thought I was going to study highlife but there wasn’t much still happening and everybody’s like, “Yo, there’s all this hiplife stuff,” this amalgamation of rap and local popular music that people hadn’t done a lot of research on, in the ethnomusicology world or in any world really outside of Africa.

I came back a couple of years later with a research grant, and during those two trips I collected a lot of cassette tapes, because I’m a music freak. So yeah, one day I decided to start this blog: it was almost a reaction against ethnomusicology, because I felt like it wasn’t really going to ‘help’ the African artists that I spent so much time hanging out with and learning from.

What role do you play as DJ and occidental in this ethical export of African goods?

Well, I don’t even know if it’s 100 percent ethical all the time. I mean, maybe I shouldn’t say that, but I am ‘stealing’ their music in a way – but it’s not necessarily hidden treasures. A lot of that music is out there in the open when you go to Africa.

However, we outside of Africa don’t have a chance to find out about a lot of it, because most of it isn’t distributed, which is why I feel like the blog is a valuable thing.

I started Awesome Tapes to show people what the music in Africa can really be like – things you would hear in a taxi in Nigeria or whatever. It was how you often hear music there, so I wanted to sort of capture that experience.

And now, being a DJ, I feel like it’s taking it a step further. It’s a super cool way to bring the blog alive and let people hear the music more in the context it was meant to be heard, which is a dance atmosphere with people enjoying life.

In the time of digital mixtapes and mp3s, how relevant do you feel cassette tapes are?

I think the cassette is never going to fully die in Africa, but definitely it’s being challenged. People are getting music on CDs now, because CD players are more prevalent than they were five or 10 years ago, but a lot of the recording companies, when a record comes out, still also make it available on tape. Another thing we don’t think about is radio. You can hear it in the deepest, most remote villages. There is a ton of music that people just hear on the radio.

Awesome Tapes from Africa is now also a label, releasing Mali’s Nâ Hawa Doumbia’s, La Grande Cantatrice Malienne Vol. 3. Why did you choose this for the label’s first release?

Hawa Doumbia is really well known in Mali. She’s like a household name and has been around for a few decades. This record is from 1982: it’s really rare and only been on vinyl, but it’s been out of print for a long while. My friend played it for me and I was just like, “This is the coolest shit ever,” and it sounded like a really cool, interesting, organic first thing to release as a manifesto for what I’m trying to do with this label: releasing complete albums rather than compilations. I want to make available music that is popular or has been popular amongst, you know, regular people in these various regions.

What can we expect from you at Worldtronics?

I’m really lucky to have come into contact with a variety of artists from Ghana that represent different facets of what’s happening there, like this groups Bradez that are quite young and are the next wave in hiplife. You have Kwaw Kese, who I did research for when I was there, and he’s just wonderful – super flamboyant and charismatic. Then you also have Appietus, who is involved in the production of many of the famous tracks you hear on the radio in Ghana. Also this rapper from the UK, Sway, who’s Ghanaian by roots.

Of course, there’s a lot of musical connection between the grime in UK hip hop and what’s happening in Ghanaian rap, so it’ll be a sort of interesting array of people to look at the way electronic music is created in Ghana, which is quite different from what you’d hear in Germany, the UK or New York.