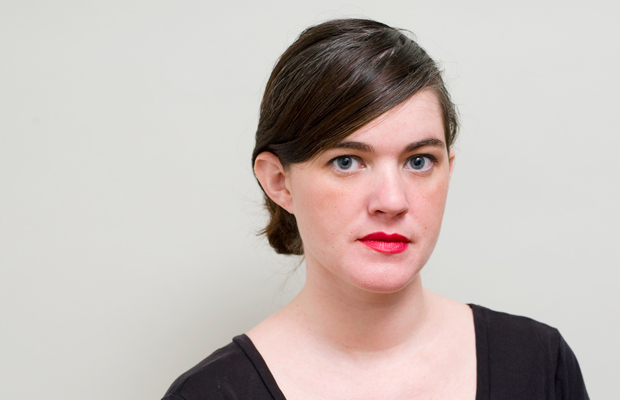 Was the absence of words in your music planned or did it sort of “happen”?

It totally was not planned. When I was playing guitar and singing with all those effects I would make up everything as I went. And when I started playing around with the loop pedals I just did things the same way: it was really easy for me to work at that pace.

Writing out everything beforehand and trying to execute some kind of thing that I already have planned is just totally not the way I work at all. So, it’s a lot easier for me just to plug everything in and do something on the spot. And with the looping, I would just sing – I mean not words. I would just sing, and that’s just the way it worked out. I wasn’t thinking about it. I was just making sound.

Also, I feel so cheesy when I have tried to write lyrics before and I can’t commit to them. So it works out that the music lends itself to be wordless.

Then what are your songs about?

I just sing, like when I was a kid. Making up a tune. And it comes from whatever you’re feeling inside. And that’s still how I feel when I make stuff now. When I’m writing or recording I am not thinking, “I wanna write a song about this person I got into a fight with” or any of those real-life situations. I am never meditating on a specific situation or person or event in life.

I don’t write anything down to the very end: I am adding things on top. Mostly it’s just totally flowing out, It’s just a feeling that you have when you are making it that is really hard to describe. I remember someone saying, it was Tori Amos, I guess – she said in an interview, “It’s like a memory, but it’s not a memory, you just feel it in your stomach.” And that’s kind of how it is, a gut feeling and not a tangible memory of any kind.

Do you resemble your music: ethereal, calm, spaced out?

I am definitely easy going. I am an eternal optimist – really good and happy about most everything. And I think that comes through in the music. Mostly just good feelings, you know, and that’s how I am in life. I mean, people tend to think that my music is really ethereal and angelic or whatever, but I kind of imagine most people that make music like that to be really dreamy and have their head in the clouds, which I am too, to a certain extent, but I am also pretty grounded and easy going.

Yeah I have two cats. I am a total dog person with two cats. Two big fat cats, the girl is called “Fern” and the boy is called “Ficus”. Like the tree.

You shot the cover photo for your new record.

Yeah. Actually it is only the top half of a photo. I actually shot a couple of weddings: I took a photo of some kids that were in a swimming pool, and beyond that were all those trees. So I just cropped it. I wanted it to be nothing manmade: just nature.