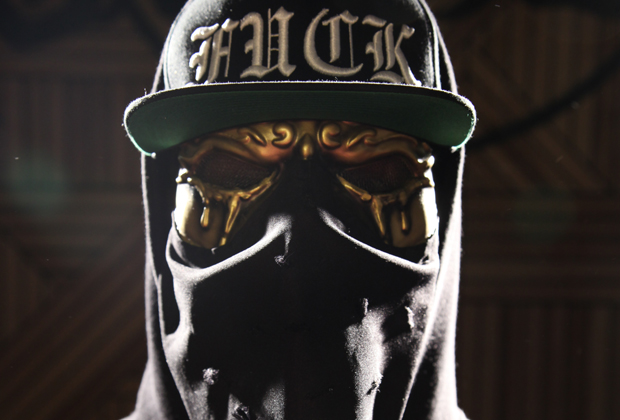 Trap as a genre developed in the early 2000s as a branch of hip hop from the Dirty South, characterized by saturated 808 kicks, and stuttering snares, with a primary lyrical focus on drug transactions – an area for dealing was known as a trap. With producers such as Flosstradamus impatient with their output being slowed down while waiting for rappers to finish their vocals, they started releasing tracks as sample-heavy instrumentals, which only increased their popularity. Boosted by the ubiquitous Diplo, at the helm of the scene is a man shrouded in a carefully guarded mystery – ƱZ. And he is, it might be added, a man of few words. He’ll be opening up the floor Friday, January 3 at Gretchen.

The internet is full of wild speculation about your identity, what’s the craziest rumour you’ve heard?

That would be a hell of a duo. Any collaborations you’ve turned down?

There are so many tracks I would love to be a part of but sometimes it just isn’t possible with scheduling. I just took one month off to make music, but it’s challenging to get in the zone and then have to leave for shows. I just get in the studio anytime I have an idea.

Your tracks tend not to feature rappers. How does working alone affect your creative process?

I like to be alone in the studio when I begin creating something new; sometimes, it’s more challenging for me to work with someone else. If I want to work with a producer, I can’t start from scratch. He or I will have an idea that the other will finish. It’s always good to see how other producers work – it challenges you to one up each other with new techniques.

You’ve had releases on a wide variety of labels. Has this affected who you’ve worked with?

It’s given me the opportunity to work with different labels and producers that excite me. The label doesn’t influence how I produce, but BNR, for instance, would be more into my minimal productions. I have few more fun collaborations on the way.

Like your Red Bull mixtape, where you were in the studio in L.A. with a host of rappers and other producers. How did this experience differ from your normal working process?

I’d play beats for the rapper and they’d choose one to rap over. At the same time, I’d be working with a producer in another room. With the other producer, he would start something and then I would take the ideas home and finish the tracks. It forced me to rethink my creative process and step outside my comfort zone. It’s always encouraging, the crossover between rap and “dance music” feels natural for me. There should be a Volume 2 coming next year.

Who would you like to work with on this one?

Some of the people who worked on the first volume for sure, but I prefer not to talk about the new ones just yet. You’ll see soon enough.

How’s the Berlin scene compared to somewhere like LA?

Berlin is a totally different scene; they’re both great in their own way. I don’t really have time to visit the city when I come for shows, but funny thing is I played in a boiler room last time. A real boiler room.

It’s awesome. It’s part of the ƱZ concept. It could be anything/anybody as long as the music is good.