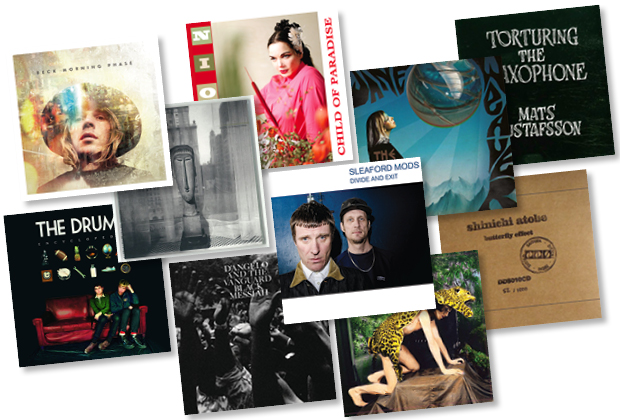 The sound on my computer conked out shortly before I wrote this and that seems about right, as it mirrors the music industry’s future as a myth-maker. Never has my continued, stubborn embrace on the album-as-statement seemed so pyrrhic: memes are the new songs and there are only about 10 stars, so the underground is everywhere. There was an underground in the 1980s, as well, but now no one wants to be part of it because of a lack of faith in the fair and equal distribution of intentional poverty. When conglomerate artists need to be described as “talented” in press releases/reviews, you know the apple has consumed the horse.

Thing is, we don’t really know how to talk about new music anymore – reading other end-of-year lists (I cheat), I still drive over the katzenkopfen of “punk” or “street” or “soulful”, as if these weren’t marketing terms for what is now an extension of both the tech and circus industries. I use quotation marks above, but today’s punctuation writes itself – and feeling in music is increasingly suspicious of itself for you.

Some listeners have favourite lyrics – I tend to nurse preferred ideas, which makes me feel a bit guilty when I pick a conceptual enterprise that refracts old concerns of mine, rather than a self-contained feel-good/feel-bad statement, as my #1. Maybe it’s the expat thing – my fondness for this Italian duo’s lightly ironic fake anthropological explorations re: Brazil might be tied up in my own American generalisations of what it is to be “European”. Then again, future generations listening to this might find its quaintest characteristic to be the lack of acid stabs.

My first trip Stateside in years was entirely rap-immersive, true to hip-hop’s current calling as a middle-aged, middle-class music. It still dominates the culture, but it no longer defines it – maybe I need to hang out in the student neighbourhoods, as I was more likely to hear BDP coming out of somebody’s car than Drake. I guess I feel guilty leaving hip-hop off my list while embracing a couple of Mark E. Smith-aping limeys engaging in a form of post-punk working-class minstrelsy. But appreciate that it’s not easy to be this funny while remaining wordy, although talk enough and someone’s sure to be embarrassed. And embarrassment, in a cruel world, is comedy gold.

Art-pop insider in Germany and unknown everywhere else, it’s no wonder David Byrne loves Yvonee Cornelius (aka Niobe) for she offers an “educated” mid-1980s the-whole-world-is-downtown-and-Downtown-is-the-world approach not unlike what the Byrne/Laurie Anderson crowd was practicing three decades ago – so much of her work favours their alien-notes-on-Earth approach. Still, there’s that privileged krautrock-world practice-in-palaces feeling that, no matter what happens, she’s going to be looked after, the album’s intricate, contrapuntal arrangements a rolling wheel of infinity that rarely assumes the risk should it head downhill, let alone Downtown.

This reworking of ancient, unreleased hard drive material should have been what mbv was last year (or what we called the new Apex Twin and D’Angelo records in 2014). Which is to say, it’s an event, though one that took place on the dark side of the moon. A strong flash of lightning at the tail end of a Chain Reaction, Atobe turns out to have remained an uncanny minimal loop master and there are tracks here that simultaneously resemble jazzy microhouse, a Soviet space soundtrack and the clicking of a mouse to launch a Youtube instructional video of a blender.

Beck seems continually bored with the idea of Beck, which can lead to either an inspiring restlessness or a noticeable lassitude. Recently, I’ve preferred the latter, and this sun-dappled, gorgeously arranged take on the current Return-to-California folk-rock sound is proudly slow-going – his best record this century. Until now, Beck’s post-modernism was better when you could see the seams. In Morning Phase, you can still connect the dots but the hazy picture they draw is preferred.

The relatively little coverage these blog-darlings-of-the-past received for this record is evidence of a disrupted Shakespearean narrative – left for dead, they sound more sincere about love. You get the sense that this is a band that is really developing its vision: the new wave affectations attached to the first album’s cruel surf were jarring enough to be interesting, but Encyclopedia creates a holistic mix of sources I would have thought previously incompatible, verging on an avant-garde always melodic. And it draws different elements than are normally used – the thematics of 1960s girl groups mixed with the synth stabs of 1970s disco and 1990s melancholic chords, a music as mixed-up as its sentiments.

The strongest example of the revival of the 1990s reviving the 1970s and yet it’s so very timely, and that’s coming from a longstanding neo-soul skeptic (though I only possess half a soul, myself). Then again, how 1990s revival can you be when you started recording your album during the 1990s? But I’ll take out-of-date to the up-to-date co-stars from the Mary J. Blige London Session that I’m finding on every other Top 10. Messiah is digressive (the longest song is the weakest), the chaotic intimacy of its Sly-nodding mix lapping over with occasional grandiosity (look to the title). And it’s hard to assimilate the elevator Vegas aspects that also get revived. But its 1990s-style politics of unity couldn’t be more timely – it’s refreshing, in the age of R’n’B narcissism, to find some narcissism that’s socially useful.

The soundtrack to health goth, this is dubstep not just filtered but collapsed into techno, with the idea of techno stretching so far in so many directions that Stott may yet end up in the middle of it. There’s an indirect directness to these tracks – a confidence verging on menace that repays headphone listening. The sense of tortured English soul that the vocals borrow of downtempo can occasionally strike as comic, as can the general industrial attitude. But the sonic placement creates gaps large enough to interject your own meaning. So, dubstep not just filtered, but imploded to erect larger structures.

Just because free jazz isn’t necessarily angry, it doesn’t mean it can’t upset others and the passive-aggressive printing of an R. Crumb letter from which the album’s title is taken is more evidence of how the avant-garde often courts the rejection it bemoans. But the melancholia of this solo sax project here is unmistakable – Ayler is covered, of course. Many of Gustaffson’s other projects are so closely associated with aggression that it’s nice to watch him punch himself in the face for a change.

There’s a concentrated attempt at plainspoken English mystery that could just as easily seem cynical as charming, and this record would really find its place in the second British mystic-pastoral resurrection of a decade ago. As it is, maybe it’s just in time for the New Age revival in spirit, if not in sound. One of the many drawbacks of the Harry Potter craze is that it moved magic away from a destabilising esotericism, placing it squarely in Once and Future King territory. Weaver is a scholar of occult attitude and in a conformist environment, attitude is power. Though not police power — in that instance, attitude could get you killed.