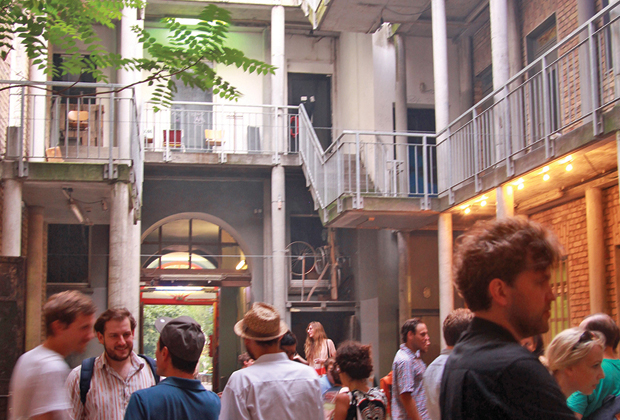 Upon entering the courtyard of ACUD, with its bright blue façade and multicoloured picnic tables, it’s almost impossible to imagine that this was once a near-derelict (if populous) ramshackle, a place of decadence, substance inhalation and all-night parties.

The current state of Veteranenstraße, where the multi-purpose building still resides, doesn’t help. It’s the picture-perfect cliché of gentrified Berlin; well-groomed parents push newborns around in expensive strollers whilst tourists lounge in the sun outside fancy bars sipping on the ubiquitous Aperol Spritz.

It wasn’t always like this. For a few years, Veteranenstraße was at the heart of the Mitte/Prenzlauer Berg party scene (and yes, there was one). Around the turn of the millennium, bars such as Bergstub’l and the still-operative FC Magnet hosted sidewalk crowds that would spill down the hill to Brunnenstraße. Much to the profit of the dealers that worked ACUD’s basement club, which often hosted a weirdly synchronous mix of Africans and goths.

Poet/performer/booker Corbett Santana was part of the regular lineup in the early days of the club. “It was a complete shithole. It was trashed and the toilet was so disgusting that I had to flush it with my foot because I didn’t want to touch it. But we didn’t care – the air was laced with hashish. It was groovy and fun!”

Back then, ACUD was run mostly by a post-Wall art collective, and its rocky relationship with the drug world helped contribute to the building’s original foreclosure warning. “That connection was mostly made by the guy who was running the club,” explains new co-owner Julie Gayard. “The people of ACUD rented the two floors to this guy who was running these drum ’n’ bass/reggae parties. And he actually ran off with lots of debts and it was those parties that kind of pissed off the neighbours.”

In 2001, the collective managed to purchase the complex, but following a series of extensive renovations they filed for bankruptcy nine years later. “They were just about to be put on forced auction. That’s when we heard about it and thought something should be done,” says Gayard.

Since early this year the complex has been co-managed by two groups: the original art collective, which now runs the cinema, theatre space and café, and what the French/German Gayard and her business partner Johannes Braun call “ACUD Macht Neu” (literally, ACUD Makes New) consisting of the gallery, club/bar and studio spaces. Aren’t they worried about stepping on the toes of the old collective? Not at all, according to Gayard. “Eventually we want to have a common website with the old ACUD people and merge.”

“The interesting thing about this house is that you don’t have to conform to the old stereotypes anymore,” adds Braun. ‘‘You feel free in this house. It’s not 100 percent renovated. We don’t want to keep it perfect; we want it to be a transformative space.”