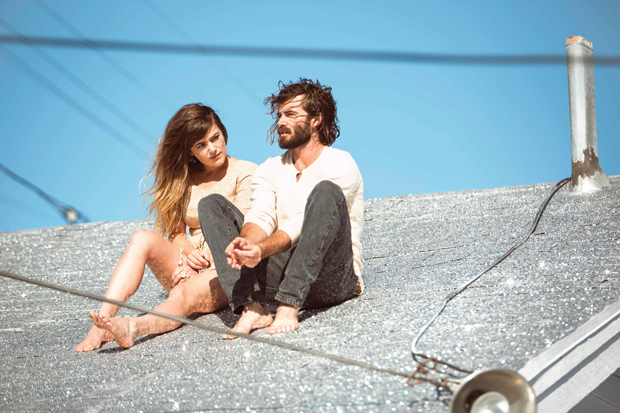 After a four-year hiatus, the Australian siblings Angus and Julia Stone found themselves coaxed by the late blues convert and production Buddha Rick Rubin into a new self-titled album (Universal).

The folk-pop duo changed it up a bit, this time, collaborating on lyrics and extending riff repetitions longer than most “Big Jet Plane” flights. Will the gregarious Julia and withdrawn Angus outlive the neo-folk movement they helped instigate? Share some memories at Tempodrom on Wednesday, November 12.

The last time you attempted to work together things “didn’t feel right”. Was Rick Rubin the difference?

JULIA STONE: Something had to change and I don’t think we actually knew how to bridge that gap. We hadn’t really talked about what sort of record we were gonna make and there was a lot of “how’s this gonna work?” I guess the few years apart, our own projects, and having separate songs all felt like it wouldn’t. But during the six months we spent together, I guess we re-established the relationship and then Angus suggested, “Let’s just get a jam room and see what happens when we write together.” And I think as soon as that happened, I was like, “Okay, this is cool. It’s something we haven’t done before.” It’s exciting how natural it felt, having never done it. I think from that point on, it all felt like the right decision.

Can we expect another collaborative album?

JS: I guess I feel the same. I think just from the way things have played out – the unexpected kind of way that stuff happens – that plans for the future are pretty… [trails off]. Yeah, it feels good like this but I think especially with creative stuff, you just don’t know what’s gonna inspire you when you get to your next project. Angus and I might be really inspired to make something together or be really inspired to work with other musicians. I really don’t know. It’d just be made up if I said one way or the other.

You’re working on other projects now?

AS: I build things. My relationship right now is with the land. And exploring the world. I’m building a stained glass house. All the walls are coloured glass and it’s beautiful. It’s over this lake and when the sun comes in, it’s just golds and greens and blues. It all shoots in and you’re sitting there and can have a cup of tea and watch the world go by.

AS: Yeah, I’ve got a band back home that is making a record at the moment. Yeah, we kick out. We’ve got names but haven’t settled on anything yet. Nothing’s sort of felt right. It’s not too crazy.

JS: My friend just finished a short film and I’ve wanted to compose music for film for a while, so this will be my first. Just an independent film – low budget – but I’m writing some music for that, which is a really nice experience ‘cause it’s not vocal. It’s all piano-based and it all has arrangements with strings and horns, etc. I haven’t done much of that so that’s kind of my thing at the moment aside from touring and hanging out with this legend [smiles at Angus].

You’re partly based in Tinseltown. Working with a sibling is a way to escape the superficial entourage.

JS: We don’t and never have surrounded ourselves with people like that. From the beginning of doing this together, it’s always been: you just make what you make. And if it works out, it works out. If it doesn’t, it doesn’t matter, you know. I think being in LA, there’s a lot of people on the path to being successful in the entertainment industry or not being successful. There’s that energy there, but you don’t have to engage with it.

Then why live in LA in the first place?

JS: We have a great time there and there’s a lot of natural beauty. It seems like a crazy city and you’ve got overpopulation and pollution but then you’ve got coyotes and amazing canyons and lights at night when you climb up above the city. You see human beings who are so kind-of crazy in a way but they’re so stunning, as well. I think for us it’s been a good place, an inspiring place to live.

Getting together and coming apart must throw your songwriting process.

AS: It’s different for different songs. For instance, there’s a song on the album called “Get Home”. I carried around that line and melody with me for about three years and that’s all I had. I really enjoyed it but it never really expanded into anything else. Then one day, I was sitting with some friends in New York in the studio and it was really cool how it happened. We were all in different booths and pushed “record” and just started chugging on guitar and all the pieces fell in place and these verses were coming out and lyrically. It just came from some place. It’s a lucid dreamy feeling in those moments when you’re in the studio by yourself and you sort of just close your eyes and your voice is taking you to these places you didn’t know you had inside you. It’s a beautiful thing.

Is it odd writing love songs together?

JS: There’s nothing to hide. We’ve seen each other grow up and we’ve been with each other throughout our twenties and I guess music’s a way of communicating what’s happening to anyone who listens. When it comes to singing and writing, it’s the one place in my life I have no insecurity about revealing everything. I don’t ever feel ashamed to be emotionally open and vulnerable in my lyrics, in the music. I think that’s what makes – for me – songwriting such an enjoyable thing to do. Regardless of whether I do it as a career or for fun, it’s always been a base to just let it all out. And I don’t think recording or making music with anyone, family or not family, would ever change that.