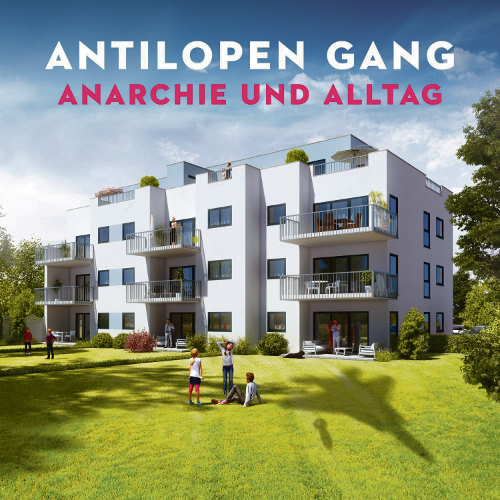 In 2014, Antilopen Gang hit the scene with their debut album Aversion, setting the tone with single “Beate Zschäpe Hört U2”, a reaction to the murders by the far-right underground NSU and the prevailing racism and nationalism within German society. Now, the trio comprising Düsseldorf and Aachen natives Koljah (photo, centre), Danger Dan and Panik Panzer is back with a nod to Fehlfarben’s punk rock masterwork Monarchie und Alltag. Continuing their trademark style of anti–Deutschrap, they spit imaginative rhymes, self-ironic punchlines and political radicalism (“We’re taking your grandma’s pension away/But for political reasons it’s okay/After all, she probably voted for Hitler”) over hard beats. Catch them live at Huxleys on Friday, March 3.

So, what about that name?

If we’d have known it’d stick, we probably would’ve thought of something cooler. It’s a stupid name, really, but I’ve gotten used to it. It’s got to do with the “anti”. We used to be in a larger crew named “Anti Alles Aktion” [“anti-everything campaign”]. The Antilopen thing just developed from that, I think. Also, there was a short period where it was cool for rap groups to give themselves animal names. There was the Bird Gang from the US, in Germany we had Vögelbande [“shagging gang”]. We’ve developed this slogan, “No one gets what the gang’s about.” That’s us included, for sure.

Do you see yourself as an outlier in German rap music?

We approach some things differently from other German rappers. For example, we’ve just re- leased Atombombe auf Deutschland as a bonus album, which is basically a bunch of punk rock versions of our songs, featuring a number of German punk singers like Campino from Die Toten Hosen. So in a way, we do have a special place. Nevertheless, we know we’re the undis- puted rulers of the game. That’s why refer to ourselves as the “Kyngz”. I think all other protagonists of the genre could actually just pack in now.

So are you trying to form a “Querfront” [third posi- tion] between punk and rap?

[Laughs] Well, of course I don’t like the connotations of that term. I think these kinds of classifications are just being attached to us by other people. We’re supposed to decide which side we’re on, where we feel more comfortable and so on. But we’re our own pigeonhole. We’re just rappers who like punk rock, and sometimes that also seeps into our music.

Do you think that rap has more social relevance than punk these days?

Rap is probably the genre that has the widest social relevance in Germany. So many kids with totally different backgrounds are using rap to express themselves, and they’re reaching a very large audience. To be honest, punk is more like a fossil from the past, only relevant to nostalgics.

In “Trojanisches Pferd”, you rap about how the media loves you for your “moral conscience”, but you’ve got other plans…

That’s true. The song ends with the Antilo- pen Gang flag flying on top of the Bundestag. That’s the final step, to occupy the Bundestag and establish a dictatorship of the Antilopen Gang party. With that song, we just want to clarify that we’re very aware of the role the media holds for us. While we don’t agree with it, we will use it to our advantage. Our presence in the media is useful for us to accomplish our goal of seizing power, in classic Lenin fashion.

Despite most songs being funny, it’s evident you’re fed up with the current state of the world. But there’s a utopian streak to your second single, “Pizza”.

Well, we had a kind of epiphany where it suddenly became clear to us that pizza is the ultimate solution to everyone’s problems! We’re seeing the simplest of solutions being administered around the world, and they’re not really working out. Now, with pizza, we’ve actually found the first model that has the po- tential to really save the world. And so this could ultimately lead to us cutting back on our basic pessimism. But we’ll see how it goes.