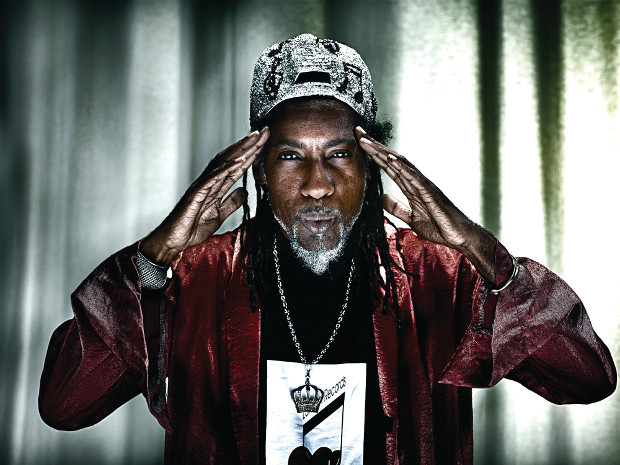 Exberliner turns 11 this month! On June 15 at 10pm, we’ll be celebrating like it’s 2002 at the nearly brand-spanking-new Urban Spree. Team Plastique’s Legs Akimbo brings the lusty Legs Akimbo Show, Mary Ocher and Your Government will preside over the quirky kids and Elbee Bad’s badass self will keep it going. We’re running interviews old and new all this week to get in gear.

Here’s our exclusive chat with Elbee Bad. And check out our chat with Legs from issue #103, March 2012 for the boobs issue and our chat with Mary Ocher from September 2011.

Elbee Bad, Bronx Prince of Dance and a longtime Berliner: He may hate the drunk tourists from England, celebrating their stag nights, but the house music godfather still hears the sound of the future, even as his past was recently lionized on Rush Hour’s totalising “The True Story of House Music”.

Over a park bench beer, Elbee notes that he still has that night energy as he was never a morning person and his parents even tried to put him to bed early so he could ’do mornings’. Luckily for us, that didn’t work. He’ll be stringing along with his POD Orchestra at this very magazine’s 11th birthday party on Saturday, June 15 at Urban Spree.

In 1993, I was invited by the boss of Hard Wax Records in Berlin to come over and DJ at the club Planet. There was a big hype about going to the East, and then I realised that those parties were across the road from streets in Kreuzberg [laughs]. After my first gig here, I saw what I always dreamt about in New York: just doing gigs and not working full-time jobs in order to survive. I had the feeling that I could do whatever I wanted here. And the gigs kept coming and I stayed because I actually missed my plane back to New York that Hard Wax paid for. So I couldn’t afford to go back but new opportunities came popping up. An African woman I met on the plane offered me a place to live in and I got jobs as DJ and organiser at various clubs, Exit and Orpheo. They paid well, so I stayed. Meantime in New York, a song of mine came out in the US making the charts and I didn’t even know because I was so busy with my life in Berlin.

Did Berlin change you?

At the beginning, I was playing house music to the kids who didn’t know it or understand it. I would play at private parties in New York – Long Island suburbia types, and I would introduce those kids to the music from the Bronx and other New York sounds. In Berlin, I had to give my music more speed and power, just like all the other Berlin DJs. Tanith was a big influence on me as he really pumped it and I had to learn how to bang it and keep up with him and other others.

What were your earlier influences?

Dance music, old jazz from the 1920s, pop, hip-hop, old school of anything. I would like to see more dancing spirit in Germany. People don’t dance enough here. You spin the funkiest sounds at parties and they don’t shake their stuff. Man, what’s that about?

The 1920s? You’re not known for spinning Louis Armstrong.

I liked punk and ska back then, too. I was a drummer when younger, in many Bronx bands and then I got into turntables, which became another instrument for me. And I was good at it. Still am. Everyone in my neighbourhood got turntables and were spinning them 100 percent at parties. I started playing music in the 1970s, and back then it was called hip-hop, underground music with fast beats, and lots of disco. People expected new stuff all the time and everybody wanted to be a DJ, so there was great competition to be fresh and innovating with what you played. You knew who was serious back then; the more money they spent on their gear, the more serious they were. The bigger the sound, the more devoted they were.

I wouldn’t call myself a singer, but I know I have a nice voice: my poetry is rap and I have a message inside there somewhere. In 1993, I wrote a song called “I Was a Slave” and I listened to it recently and I still find it relevant today – it relates well to the Occupy Wall Street movement. Another song was called, ”Just Don’t Stop the Dance”, a song with a message about whatever happens in your life – don’t stop the dance [laughs]. I am not a spiritual guide but the spiritual message is always in my music. I write lyrics to inspire and I want to take the audiences into the fourth or fifth dimension and make them understand it.

You believe you make the music of the fifth dimension?

Since I am a futurist, I always prefer to make something new and would prefer to hear the next shit that I haven’t so far. I want to take the humans who dance to it to the fifth dimension, and want to show them that they can get there if their ego would allow them: love, spirituality, warmth, have fun, and not think of money all the time. Family is also important – although I was never shown that, my lyrics are about that. I believe that the Earth will split one day, too. So I tell my listeners about that.

An interesting death and my records to be sold well after.