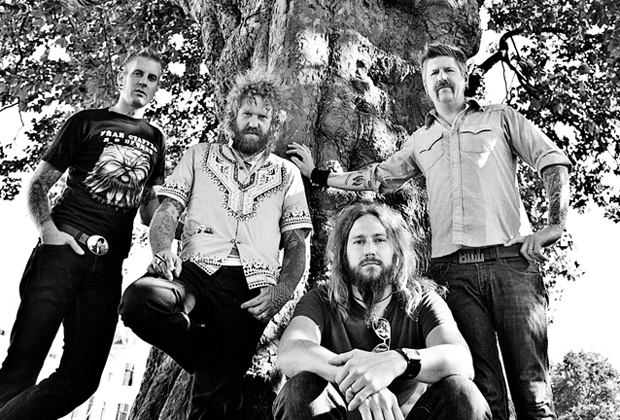 Sludgecore veterans Mastodon have become one of the foremost hard rock acts of the 21st century.

The Atlanta natives have moved away from their metal roots over their last couple of albums toward more of a Monsters of Rock persona, grabbing toward even larger crowds, while drummer Brann Dailor has taken on an increased role, even singing lead on a track on their latest, The Hunter (Reprise).

They’ll be slogging through C-Club on Tuesday, January 31.

Mastodon always has a concept behind its albums – fire, earth, water and air were the bases for your last four records. So what is the story behind The Hunter?

Well, the story is: there is no story. It’s the first record we have done in a while without a full-blown concept. The name of the album is dedicated to the memory of Brent’s brother, who died in December of last year during a hunting accident. We had to do it, because things like that are truly always epic life-changing experiences, and if you don’t include them then you’re doing your art a disservice.

Was The Hunter a deliberate attempt to move away from elemental concepts?

Well, wood sort of reared its head throughout the album, purely by accident, or maybe not. After the last record, everyone was like “Well, this is the air record and you are going to be out of elements soon.” But you know, if you get into the Chinese elements you can go on forever: there is wood, all sorts of things – we could do a carbon record, or whatever the hell you want to call it.

Did the lack of a concept change a lot for you guys?

In the past, making a Mastodon album was a truly stressful situation: months and months and months of going into the record space with highs and lows. Some days it was, like, “Yay, awesome, we had a breakthrough,” and then other times not so much. Frustrations and tempers flare.

You know, you are trying to write a 15-minute song, and it has 15 riffs in it and this guy can’t learn the one riff and this guy wrote it, so it’s really hard to get through a song. And when you have played it 50 times in a row, it really begins to wear on everyone’s nerves a little bit.

But this time around we had a lot of stressful things happening on the outside with people’s personal lives. Sometimes life is easy-peazy-lemon-squeezy and other times it’s not. So we just had fun.

We wrote riffs, like with the song, “Curl of the Burl”: We would have never left that riff fly. We would have been, like, “That’s way too easy. We have to make it more difficult for us to play and more difficult for the audience to listen to. We want to make people work to listen to that song.” But this time we became extremely satisfied with a simpler version of ourselves.

But I am not speaking badly about our previous material, because going in there and making it tough on ourselves was the right thing to do. When we had our finished product it was like, “Holy shit, we did that.”