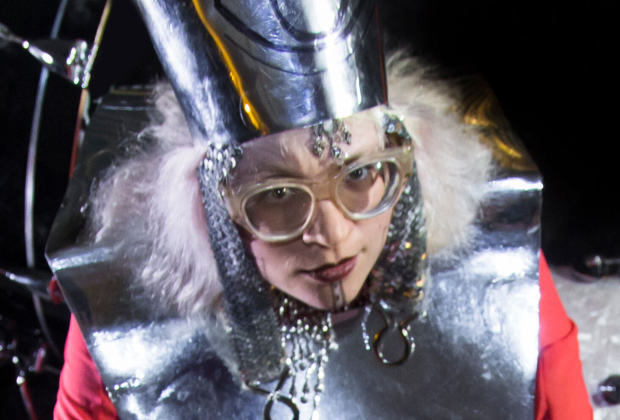 It’s been over three years since Berlin’s beloved expat art-rock songstress debuted her new band Mary Ocher and Your Government, adding two drummers and a propulsive, tribal sound to her signature theatrical vocals. They’ll be celebrating the release of their first album as a trio (self-titled, Klangbad) at Roter Salon on Sunday, January 10.

Your new record comes with a new stage persona, inspired by Afro-futurism and Klaus Nomi.

I heard an interview with [techno producer] Derrick May where he mentioned “borrowed histories”. When you find yourself without roots in a new place, and you’re trying to research your own history, you create your own version of a story because you feel disconnected from wherever you come from. This is something that I can completely relate to. I grew up listening to Klaus Nomi. I don’t think musically he influenced me so much, but everyone who sees our outfits will be like, “You stole that!” The triangle was just such an easy shape to make. So far the character is mostly mute and only talks during songs.

Are you drawn to the theatre?

In a really creepy, strange way, without really doing anything to secure a place there. My dad was an actor, and he always criticises everything I do. So I feel somehow this is not my field. I suppose after all these years, I have an idea of how to interact with an audience and improvise. I hate being told what to do, so I don’t think I can work with directors unless they’re very flexible. The way I work with actors is mostly a collaboration. That’s the only way I can work and how I would want to be involved in other people’s work.

Do you feel the need to control your public image?

It serves the music. You need to focus people on what you’re trying to say. Social media made us so conscious of those things, because we are actively taking part in these decisions. It’s not some PR agent from the outside, it’s basically us with more power. In some way, it’s more liberating; in another way, everybody is a little more aware of it. It becomes more important than it used to be. And it’s fine as long as it doesn’t take too much time.

How about your private identity?

Musically, this band is an island. I don’t think that it should be presented in the light of my own biography, it should just be its own thing. I also think that the “biography” in this linear sense is less relevant. It’s mostly vague reminisces of particular types of rules that are being described in the songs. It’s a strange, totalitarian, nightmarish kind of universe, and then my anarchist views are part of it, but that’s maybe as far as it goes. [Laughs]

You finished recording the album in summer 2014. Why the wait?

It always wastes so much time to have to look for the next label. It’s a strange phase, because you’re already presenting a different concept on stage, but it’s still not entirely out there. It’s a transitory stage. In between, though, I released a double album of home recordings [The Fictional Biography of Mary Ocher]. I was curious about my own process, and I thought maybe other people would want to hear it, but it didn’t get any publicity. It felt like a waste of time to have to wait another two years; that’s why I decided to just release it on the internet. If I could properly release it in a way that would be easier, I would do it, but at this point, it doesn’t seem like a good decision.