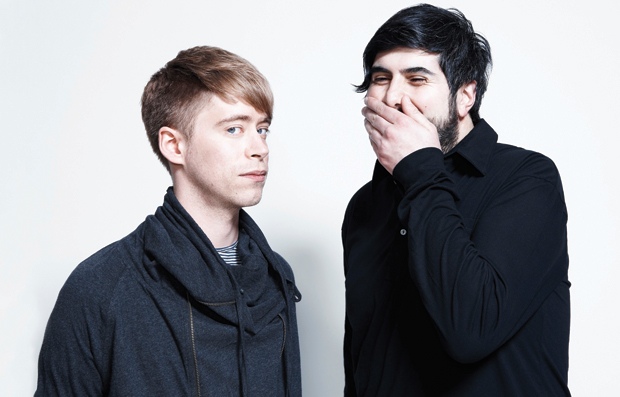 Makes sense, then, that they’ve ended up on the fashion-y French Kitsune label for their latest endeavour, the Lift EP. Spending the last couple of years generating new material has led to recent collaborations with The M Machine and Steve Duda and Youngblood Hawke, with whom they’ve taken a marked detour from their signature grit-heavy electro through the anthemic, synth-tinged track “Wolves”. That’s not to say they’ve abandoned their homeland and homesound entirely. Jence and Isi have pencilled in a one-off DJ-set at Berlin Music Week’s cornerstone, the Berlin Festival (September 5-7), now at Arena Park and surrounding sprawl.

You’re famous for recording in an abandoned WWII bunker. Why?

Err, money. They’re only good for rehearsals or storage, so it’s very cheap and we didn’t have any money. But then it turned out that it was perfect for what we want to do – we can go in there and be loud until six in the morning on a weekday, it doesn’t matter. No one cares: the walls are six feet thick. We had the first bunker in Hamburg, and then we moved to a different one after a couple of years. Of course, we needed to treat it a little bit, because it’s concrete, so if you leave it raw it sounds terrible. It’s also, I think, a big influence on our music, because it’s very isolated. There’s no sense of time or space, there are no windows, so you have to come up with something; otherwise it’s empty!

You can spend days at a time down there without feeling the pressure of sunlight.

That’s how it was when we started but now it’s a little bit more 9-5, or sometimes 5-9. We go in and get a lot of looping material that we can work with, which we then roll out and see which pieces we can post together and want to listen to for four minutes. The music always comes first for us because we’re not classic songwriters, and then we sometimes try to write on top, which is a very long process. If you do both things at the same time it’s usually faster but that’s just how we work. On the last album, we started working with Oblique Strategies, that setup with a deck of cards that Brian Eno came up with [with Peter Schmidt]. You draw one and have to stick to certain rules with whatever you choose. If it doesn’t fit, just discard it.

Stuck in the bunker, you must be completely isolated from what’s happening around you in Hamburg.

We’ve got a lot of great people coming from Hamburg. One of them is my neighbor; he’s part of the Adana Twins. They’re playing around the world now. Tensnake, from Hamburg, he’s on Radio 1 all the time. Solomon has gone massive – I mean, I used to sell him records at the shop! It used to be big for house music at the end of the 1990s, but then house music was dead, no one knew what to play; there was a bit of a void and that’s how we took over. I’m not sure how much we influenced the development but maybe we ignited a spark in people to think, “Oh, it is possible, let’s go and do it.” However I don’t know exactly how that translates to the club scene because I’m usually not in Hamburg! I’m always on tour.

Hamburg is known for hip-hop and grad school indie, not really for its EDM.

When you’re from Hamburg, you like being independent. That’s one of the mottos of the city, actually. Because we are from Hamburg we are not and we were never part of any scene or clique. We were quite isolated and we liked that. It’s always annoyed me when people start putting you into certain categories and tags. It’s always a bit draining but you get used to it. And it’s OK in some cases. I mean, if they put you in the same category as Daft Punk or The Chemical Brothers, then it’s a compliment. But the tags have changed over the years and it’s always funny because our music has more-or-less stayed the same.

How do a couple of independent Hamburgers stick together for a decade?

I think we’ve stayed on the same wavelength. Maybe in-between there were times when both of us went into whatever direction we were going towards and it went a bit more extreme. Isi is more positive but I’m the darker guy. If I watch a movie, I prefer the baddies, so it went more in that direction. But it’s never really too far off anything we’ve done for the last 10 years, really. We’re with each other almost every day, so there hasn’t been any time to part and come back with different things to bring to the table. Also, I don’t think our tastes completely changed over the years. It’s sometimes hard for us to keep up to date with the latest developments in music, but we always get around and incorporate everything into the core that forms our sound.

Yeah, it’s crazy because we came up with this instrumental track and people started asking about it. I think that the core of the Digitalism musical universe would be kind of romantic, melancholic music, usually riff-heavy, but because we don’t really play guitars we have to program it – soundtrack-y music that makes you move. But “Wolves” is a bit of a departure for us. It’s a bit gloomy, a bit nighttime but it’s also quite energetic and it just clicked into place. I came to the conclusion that if you take our last album, which was very song-based, a bit further and add some more electronics, you kind of end up at “Wolves.” It just totally makes sense.

To Berliners, as well?

Well, it will be great to be back in Berlin. We’ve had a bit of time off, so that’s given us time to come up with new stuff, and people know already that there’s always a good chance of us drop-testing new tunes. I’m also curious to see how it goes because the Festival has moved [from Flughafen Tempelhof], right? So, I don’t know if that’s great, yet. I think the line up is pretty good. Though I’m just a bit gutted because I really like Jimmy Edgar and I think he’s playing the same time. We’re basically starting up all the engines again to do this and then go on a US tour.

At long last, the US is finally profitable for electronic music.

Some people have mixed views about the American electronic scene because maybe it’s a bit more mainstream. But the fact is that the big acts like David Guetta have opened the doors over there for acts like us. It’s interesting, because we used to have a fan base in the US and now there are all these new people, and they’ve never heard of us, so it’s kind of like starting from the beginning again. Because we’ve been around for awhile, but people there are asking us, “What, you’ve got albums out? When did you start making EDM?” It’s a tricky one, but it’s getting there now.