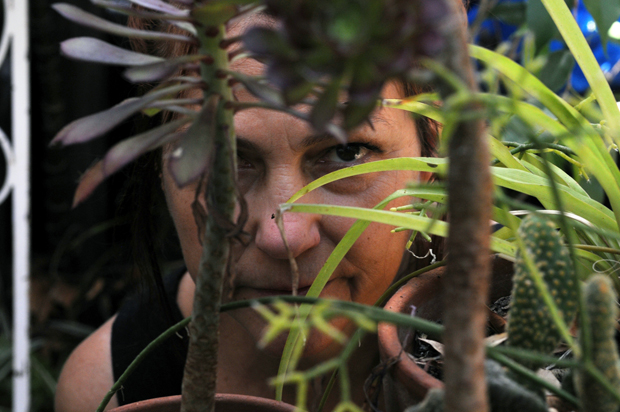 “You get the feeling you’re walking through her dreams as you listen. The intensity of feeling in her singing is a little frightening sometimes,” states Michael Gira of Swans, who released one of Lisa Germano’s records on his Young God label. Germano offers a seductive blend of painful beauty, wounded sentiments and a dark, not-entirely-hopeless outlook on the world that surrounds her. No Elephants (Weatherbox) will be the ninth release by the Indiana-born and Los Angeles-based singer, multi-instrumentalist and much sought-after session player (David Bowie, John Mellencamp, Eels, Simple Minds, Iggy Pop, et al). She’ll tickle the ivories on Tuesday, November 5 at Roter Salon.

Your music is often called “intense,” “raw,” “personal” and “demanding.”

I have learned throughout the years that, yes, my music is demanding. It isn’t casual listening and doesn’t even work at all unless you take the time to really feel it. You still, of course, may not like it, but unless given attention, you definitely won’t. I often struggle with why to put these records out if they are so hard, but when I actually reach people it is deep and very worthwhile for me to know I have communicated something that means something to another person.

I hear bits of humour within the melancholy.

I come from a very dramatic Italian family and we all have a dark sense of humour. We have to laugh at tragedy sometimes to even be able to understand it.

The “elephant in the room,” the thing that is not said that looms above any movement forward in relationships or issues. I wanted to address the way we are lied to in concern with what we eat, where it comes from, how it’s manipulated and how animals are treated. Our ignoring the Earth that is telling us everyday that we are messing up here with losing bees, global warming, etc. I wanted to create a world where apathy wins and it’s then pretty ugly and empty. Hopefully so we can then change and be more conscious, respect the earth and it’s beings: Heaven on earth.

What is the song “Ruminants” about?

“Ruminants” started the process, as I wanted to write a song about the horror of factory farming without being preachy about it. So I related myself to the ruminant, an animal that has an amazingly designed way to digest food. They have four stomachs to properly digest, they chew and throw up, it goes to the next stomach and they do it again until done. At factory farms they are fed corn which makes them sick. They can’t digest corn, so they are sick and have to have antibiotics to stay alive. Then they are given hormones so they continue to grow – still sick. We are eating sick and tortured animals with this process and that isn’t in any kind of order in the universe. So I thought it was funny but not funny at all that I wish I had four stomachs to deal with this shit. How we are brainwashed into not thinking about it: throw up start over.

You use cellphone sounds on this album. I looked at my phone, looked, like Pavlov’s dog, every single time one of the sound effects came up.

With the idea of No Elephants also came a thought that there is no elephant in the room because we don’t even communicate well anymore. All the computers and digital toys just make it easier to be distant from each other and the earth. How could there be something not said looming when we aren’t even communicating anyway? So I wanted to add these modern sounds to the animals and sounds in the background. [Producer] Jamie [Candiloro] and I had fun doing this, finding the right phone computer animal sounds to add. One theory about the bees demise is that with all the digital vibrations in the air, they can’t do their magic dance with the flowers. Probably it’s the pesticides but I liked this idea and added digital sounds to “dance of the bees”. For fun?

Lizzy Waronker did the distinctive artwork for your album. How did you guys find each other?

I met Lizzy Waronker when I was recording Lullaby for Liquid Pig (Young God) with her husband Joey Waronker, who is known more for his drumming [for R.E.M and Beck, among others] but he is a great artist all around. She was writing poetry at the time and told me my music inspired her to finish poems, ideas and put them into little books for the public. Then years later, I saw her artwork and she had developed a whole new side of herself. I knew she would be the person for this and am so honoured that she did it. On the cover she has a doll/girl unconscious – so comfortable laying in fur – totally not knowing the pain and suffering the animal must have gone through. Then on the back she’s awake and noticing the bunnies and earth around her. Then inside the animals are looking right at you like “What the f— are you doing to us?” Once again kind of funny, ’cause they are such cute antique animals so innocent. I love it!

What will the live set look and sound like?

I play on my own this tour, just piano and me. I used to have a band and play guitar, etc., but the music on No Elephants reaches better very stripped down like the record. No phones or computers though, but probably everyone will have one on during my show, ha ha.