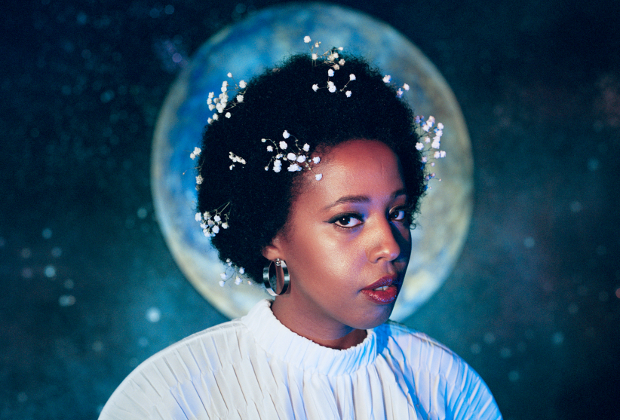 Back in 2012 when Cold Specks broke through with the soul-y, heartfelt I Predict A Grateful Expulsion, she presented herself to the public as Al Spx, instead of using her actual birth name. While preparing for her newest album, Fool’s Paradise (out last month) she finally embraced her Somali roots, discarding the moniker and went out publicly as Ladan Hussein, born in Toronto to Somali refugees. The new tunes see Cold Specks move towards a more synth-inspired sonic experience, thematically exploring her own made-up visions of pre-war Mogadishu, as well as experiences of death and feeling foreign in the country you were born. Cold Specks aka Ladan Hussein hits Musik & Frieden on October 14.

You’ve said that the new album is your most personal to date. How so?

I definitely explore diaspora dreaming. I explore my identity as someone who was born in one country but yearning to be in another one, so I’m dancing between these two worlds. I talk about my parents refugee experience, I speak in Somali at times and I have the deeply personal prayer from my mother. She’s praying for me to achieve all that I want in life, to have good fortune and health and it’s a very beautiful, loving message she sent so I’ve included it at the end of the album.

Why did you choose to include the prayer?

Seemed like the most fitting way to end it. There’s a lot of discussions on refugees in the world and Somalis always have these negative narratives surrounding us, violent narratives, lot of darkness put on us by other people. And I wanted to show some light, for me it’s the most loving, beautiful thing to receive a prayer from your mother.

Since you released Neuroplasticity you left behind Al Spx and are now Ladan Hussein. What led to that decision?

The reason I created Al Spx is because Ladan Hussein is so close to bin Laden and Saddam Hussein. Since September 11, my name has been misspelled by people, they just assumed it was Laden. I was bullied as a kid, people would say I had the entire Axis of Evil in my name and trying to make it as an indie artist, I didn’t think I would achieve the kind of success I wanted to with that name. So I created a fake name and I thought it would be cooler to be someone else. It’s very sad, actually, that I didn’t feel safe being myself.

But you do now?

I just don’t care anymore. The world is fucked, and as a black Muslim all odds are stacked against you. I realised I had this platform where I could speak for people who don’t ever really get a chance to speak for themselves. My name is Ladan Hussein.

When all the discussions were happening about refugees in the US, with Brexit in the UK, refugee crises across the world, I would turn on the news and feel personally attacked. So I had to disconnect, detach and create my own world where I could get lost. But that can only last for so long before you realise that, although self-care is important, it just isn’t real. The album is a document of that period. Around my birthday I was planning to go to New York and suddenly my sisters couldn’t fly with me, my parents couldn’t fly with me, because Trump’s travelling ban took place and Somalia was one of the countries on it. It’s horrific. But I’ve come to terms with the apocalypse. I’ve stopped being angry. It’s just apathy, a close friend of anger.

You mention your own visions of pre-war Mogadishu as being connected with the sound of the album?

I think it’s an emotional form of cohesiveness, it’s not exactly a direct influence. There’s these 1970s funk bands, jazz bands that inspired me in a way I can’t articulate. Lyrically and thematically it’s all there, but not in-your-face there. A song like “Two Worlds” is a song about being caught up, being from the wrong place and not really feeling you belong. Thematically it’s there, sonically it’s my own world.

You say one of the reasons you chose Al Spx in the first place was that you didn’t expect to make it in music as a black Muslim woman. How was it like growing up in Toronto as a child of refugees?

It’s incredibly racist. I grew up in the hood. Before Somalis you had to be a Canadian resident to get metro housing, but then the war happened and people were fleeing so the rules changed. All of a sudden these black Muslims filled in the neighbourhood. They treated us like we were dirt under their shoes. I remember being seven and having my face shoved into the snow, getting called a nigger. I have a specific memory of not knowing what that word meant. I was never made to feel Canadian, which is why it was easy to leave. When I came to the UK, I took on a new accent, I took a new name. I’m back in Toronto now with my parents. The city is more liberal, the communities are more established, but there’s still a lot of hate and racism. All of this alt-right shit has inspired a lot of crap in Canada as well. I mean, it’s crumbling everywhere.

Do you feel it’s important for you as an artist to speak up about these kinds of issues?

For sure. People think about Muslims, refugees or diaspora and their experiences are all quite negative, and it’s important to show them the truth. They don’t know what it’s like. I think it’s important to speak up, because I want to speak for my little brother and my cousins and people who don’t have a voice. I don’t have a political agenda per se, but people are asking me questions and I’m happy to answer.

The Al Spx moniker was also used to blend more easily into the music industry. Do you see race problems there as well?

In Toronto when I started making music, it was a lot of indie rock and white men with guitars. I was visibly different and I didn’t want to be. I wanted to blend in as much as I possibly could with my skin colour. I didn’t speak about my religion, I didn’t speak about anything. I remember taking off my hijab was because I didn’t want to be a visible Muslim any longer. I realised how easy it was to get by without it. For an 18-year-old to realise that losing a part of yourself makes it easier for you to exist is a very horrifying fact.

If you could speak about things you wish people knew in terms of being a black, Muslim woman, born to refugees, what would you say?

People don’t leave home unless home is the mouth of a shark. It’s not like we wanted to be in these countries. Look at where there’s huge Somali communities: in Toronto and Scandinavia for example. We’re from the coast of Africa with sun, ocean, we don’t want to be there, to be treated day in and day out like dirt under shoes, it’s not a nice feeling.

Have you been to Somalia?

No, but I’ll be joining my family there in December. Just taking it in for a month, learning where I’m from – I go there straight after the tour. I’m excited for sure. I’m going to be in the North for the most part. I might go to Mogadishu, but there’s nothing there for me anymore. It got printed in an article that I was, but that’s not certain. I would like to see where my family is from, but there are a lot of horrible things that happened to my family.

Until now you didn’t know much about your family’s life in Somalia. What has that been like?

When the war happened, my sisters got caught up and they were missing. They weren’t in our family for about 10 years, and when I think about growing up as a child, thinking about Mogadishu, it was these sad stories I would attach to the city. Darkness, you know. I never asked about the light until I got back in these digitised VHS recording, these songs that survived the war.  The culture has changed so much, you can’t blame people for turning to God after war, but it’s nice we have this music and these videos trapped in time forever. I can see where my parents came from, the lifestyle they led. Very intriguing and fascinating. I felt more connected with my family, I felt that I found the peace that I had been missing. It definitely made me feel more confident and in love with myself because I know myself better. I’m trying to show that on the album.