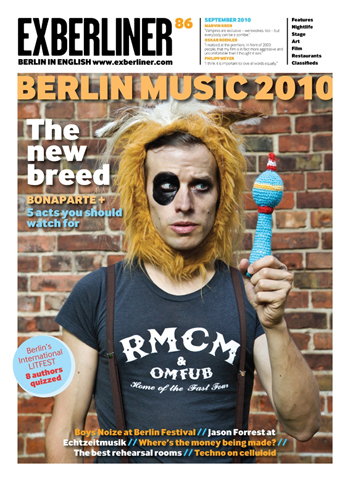 The Berlin music scene hasn’t changed much in temperament this last decade. Perhaps house music has edged out electro a bit, and there are an increasing number of fire-breathing circus-inspired acts, such as our cover band Bonaparte (see THE NEW BREED, page 9-12 of the September Issue, for more musical acts that have piqued our interest over the last couple of years).

But techno hasn’t vanished, nor have expatriate folkies, nor well-scrubbed Canadians attempting to act out. In this issue, we’ll be happy to show you their PRACTICE SPACES (page 14-15 of the September Issue), mysterious evidence of real activity in the world’s leading city of entitled leisure.

What have shifted radically are the city’s demographics: much of the East is now comfortably bourgeois, its nightlife controlled by that pioneering elite that grew up in the wild Mitte of the 1990s. A slumming mockery of glamour has transformed into an acceptance of just making money. Prepare for more techno ski excursions and hipster Nazi dance bands.

The Nü-Neukölln in the West, on the other hand, has replaced Mitte as the home of the two-year summer vacation. There you can find lovely young girls with balls of hair on the top of their heads unafraid of a more experimental and psychedelic stance, even if the police, as in the example of recently shuttered Raum18, would prefer this not to be the case.

Which side are you on?

Finally, not to say officially, Berlin gets that the nightlife it’s been gentrifying into nothingness is its key selling point. So Mayor Wowereit shows up for the occasional club night now, sans Groucho glasses, and says a few words, oblivious to the fact that the primary appeal of Berlin’s club life is the ability to do drugs relatively openly late at night. And yet, as shown in our piece on the BERLIN MUSIC INDUSTRY (page 16-17 of the September Issue), the future may not be the entitled freaks who construct fake African slums for a little Adidas money (though anything is beautiful if covered with enough confetti), but the geeks, sitting in their cubicles and forging the scripts and software that will define the future of how we listen to music.

It’s notable that several films have been forged on the music makers of Berlin, often with a tone both celebratory and a touch elegiac. We interview the directors of a couple of them: one concentrated on the DJ freaks; the other on the knob-twiddling, mad scientist geeks (see SPLITSCREEN, page 13 of the September Issue). Time’s not up quite yet and, hey, the economy is getting better, so once you hang up your Arafat scarf and glitter suspenders, there should be a geek life just waiting for you to grab it. Now if we could only do something about the beer-bus tours down Weserstraße…

Also in the MUSIC ISSUE :

Interviews with BOYS NOIZE, JASON FORREST and muckraker extraordinaire HANS-MARTIN TILLACK. And much, much more…