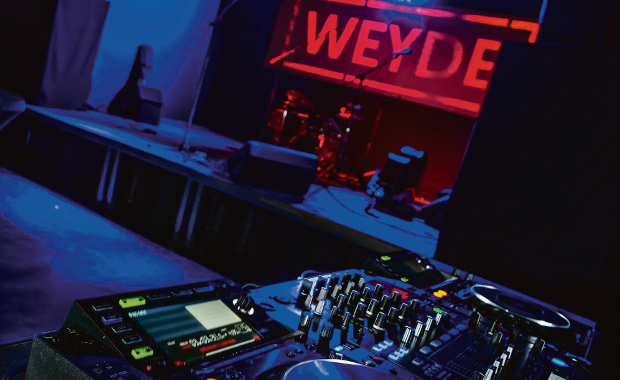 For quite some time, techno-loving people of Berlin wanting to avoid the tough door policy of Berghain and the queues of About Blank have been seeking refuge in the city outskirts, where the ratio of abandoned factories  to noise-sensitive neighbours still skews in club owners’ favour. From Sisyphos in Rummelsburg to Heide- glühen in Moabit, “outside the ring  is the new black” – or so goes the press email from newest addition Weyde3, which hopes to lure partygoers from Friedrichshain and Neukölln all the way to Oberschöneweide.

It’s an area not quite unfamiliar to some techno night owls: just next door, Kiki Blofeld set foot with high hopes after its move from Kreuzberg in 2014. However, with the Ämter on their backs and not-so-steady visitor numbers, the club owners gave in and vacated the premises after only one year.

With a Funktion-One sound system, three rooms and a patio, finally opening May 20, leading out to a nice view of the Spree, Weyde3 has all the standard amenities for debauchery. Spokesman Jens Schwan said that he wanted to “recreate the feel of clubs in the 1980s and 1990s, with thick walls and limited decoration.” To achieve this look, the owners sought architectural consultancy from Studio Karhard, the firm responsible for Berghain’s design. So far, so trendy. But with leopard-esque grey wallpaper lining the corridor and territorial packs of young couples holding hands as they snaked through the crowd, opening night on February 13 felt a bit like a nature documentary.

The massive system in the Kubik Halle naturally delivered clear sound, but it seemed to fall on deaf ears. Despite a tight door policy that hordes of Facebookers bemoaned the next day, the crowd that did get in was more or less bewildered by the minimal sounds of Tevo Howard’s Chicago techno pumping through the speakers, and left wondering when a song with words would come on. With no ban on photography, a decent amount of clubgoers experienced their night through  the screens of their cell phones and/or behind garishly oversized sunglasses.

Perhaps we’re better off waiting for July and August, when we can imagine the massive patio will be a huge draw. Plus, the folks behind Weyde3 are preparing a ferry service from Oberbaumbrücke to Oberschöneweide that will be setting sail “hopefully this summer!” according to Schwan. They also plan on collaborating with other riverside venues to create a maritime club-hopping experience – so keep an eye out for party boats filled with DJ Khaled lookalikes puttering down the ever-more-crowded Spree.

Keeping its next-door predecessor in mind, the club does deserve some credit for trying  to move outside of the traditional party zones. With would-be Neuköllners now settling in Treptow, it’s only a matter of time before Oberschöneweide fills up with twentysomethings looking to party close to home. Schwan hopes to service this community of outer-ring party- goers, walking the fine line between cool and commercial. And with its quality construction and top sound system, his club does have serious potential to become the next Sisyphos.