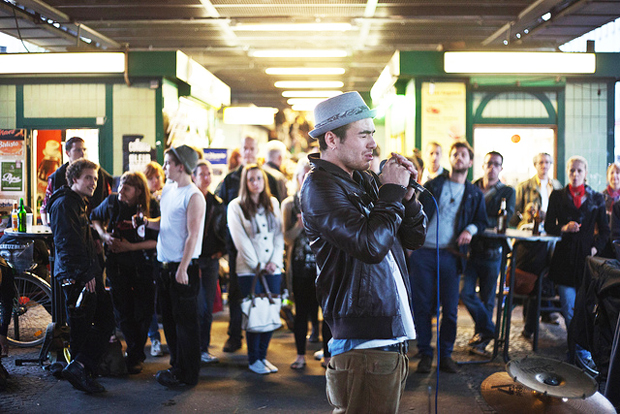 Admittedly, this summer has been a moody tart that could more easily go by the name Bummer but, as Berlin teaches us, it is better to have a festival than bear a grudge.

Celebrating both the longest day of the year (hungover work days aside) and World Music Day, the annual Fête de la Musique on June 21 is the perfect excuse to prance around the city revelling in the free sounds and sunlight like the urban nymph that you have long desired to be. But we know that with a broad array of events comes that sort of anxiety you feel at being faced with too many ice cream flavours and a fragile cone. Which is why, in the interest of preventing large-scale FOMO [Fear Of Missing Out], we have picked our best of the bunch for you to decide in peace.

Freestyle wandering through Kreuzberg’s party strip is always a safe bet in terms of rogue festivity. Amongst others, the dependable rock ‘n’ roll loiterers of Wild at Heart are getting involved – sticking it to the outdoors with an indoor program of live ska/rocka-/punka-billy acts – while Morena Bar gets Australian-Greco-Roman, Baron Castle, shedding his toga for house beats alongside Jack Haighton in the open and hopefully rain-free air.

Wham, WestBam, thank you ma’am – the techno-it-all who was there at the birth of the Love Parade and the 1st Mayday rave tops the glowing list of acts at this year’s Sommer Safari. Tickets for the open air and the ensuing indoor festivity at Postbahnhof are 9€ but with a line-up that includes electronic pressure cookers Schluck den Druck and techno rangers, Drauf und Dran – not all the best things in life are free.

The ex-Flamingo venue is back on both feet as P.O.P., hosting the event no authentic or aspiring Scandinavian can a-fjord to miss out on. Nordic by Nature x Norr Magazine’s ode to Midsommar includes traditional food, floral wreath weaving, maypole dancing and a live line-up that will get your flaxen plaits swinging with approval. With rippling Finnish pop-chillwaves from Aves; hungrily hyped Dinner; and Swede-talking indie-rapper, Anton Kristiansson, among the names dropped, it promises to deliver the Göteborg goods.

If minimal techno and house float your boat the Fête de la Badeschiff will definitely keep you above water. With headliners Mollono.Bass rub-a-dubbing perky techno live and Jake the Rapper hip-housing, all the right hands are on deck.

House on the Sand (House Techno)

‘Umsonst & Draußen & Drinnen’ makes no effort to keep its cards close to its chest: it is, after all, free, outside and inside. But what Sage Restaurant didn’t fit into its event name is the line-up of beached beat-makers including Fusion graduates, Dürerstuben and Dreher & Smart; techno-house soldier, Koljah; and Watergate house-mates Sebastian Wilck & Stassy amongst others.

Starting with Chilean reggae/salsa shakers, La Mula Santa and drumming workshops in the Kidzcorner, Berlin’s Caribbean beach bar has a Yaam-packed program that will keep both the young and the creaky tropicalized. Along with the Berlin Boom Orchestra’s ska symphony and a stilt walk and fire show from Bonazirkus, make sure your fruity headdress is fixed securely and juicily.

When Boysnoize and OYE Records got together to hatch a line up, they thought big. Berlin magic-mushroom-electro-Meister Machinedrum snares the opening slot, followed by all from noizey boy D.I.M. to Uffie ex and current Ed Banger banger, Feadz, amongst others to make the midsummer night an electro dream.

Pulling strings. And keys and woodwind instruments. (Classical and Contemporary)

If it’s Felix Mendelssohn, Albert Breier and Carlos Tenan’s music that you’re really after, the EU’s Camerata Europaea orchestra have your back. At the steadily flicking hands of chief conductor, Maria Makraki, the free concert at Berlin’s concert house will be a cultural highlight and possibly one of the few electro-free zones in the city.

What list would be complete without the current buzz venue on Revaler Straße? Putting the power in your hands, Urban Spree enlists partygoers to submit their favourite tracks and play them against one another for the prize of subsidised snacks and pride. But if you prefer others to play God, the Undogmatisch Show is on the same night, led by white-noise wizard Frank Bretschneider.

For the carnivalvores who are looking for more (!) you can find a complete list of all registered events on the Fête de la Musique website, or alternatively just follow your heart and hope for the best.