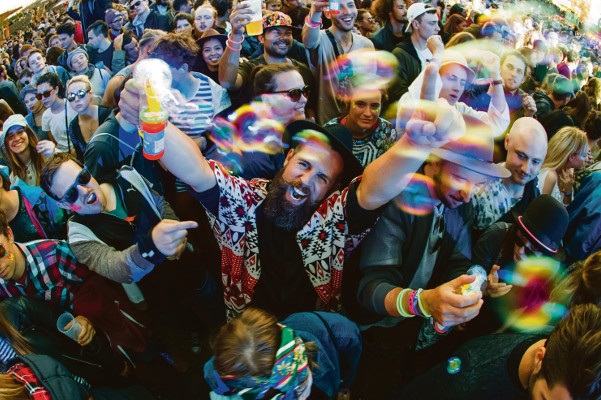 Are your friends’ snaps from Primavera and Roskilde giving you festival FOMO? Whatever, you’re too cool to waste your time sprinting between Arcade Fire and Aphex Twin. With the exception of MELT (Jul 14-16), who’ve booked everyone from M.I.A. to Bilderbuch for their 20th go-round in Ferropolis, Berlin-Brandenburg is all about the boutique summer fest: fewer stress-inducing overlaps, more affordable tickets, smaller crowds. How can you tell which one’s right for you? It all depends on your demographic…

For Francophiles who waited too long to buy that Ryanair ticket to Paris: Spectacular Fest (Jul 5-8, Urban Spree), an eclectic mix of French and Berliner bands, DJs and performers co-curated and headlined by artist, musician and Exberliner cover illustrator Jim Avignon aka Neoangin.

For those wondering what Chicks On Speed have been up to all these years: Yo! Sissy (Jul 28-29, Festsaal Kreuzberg), where the arty duo join a line-up rife with the usual queer-scene suspects including Zebra Katz, Planningtorock and someone from The Knife (this time it’s Karin).

For that guy or gal with the acoustic guitar at the house party: Melodica (Jul 29-30, Klunkerkranich), featuring a line-up of 12 mostly-German folkies and twice as many singalong moments.

For reformed jazz geeks: A’Larme (Aug 2-5, Radialsystem), which throws rockers like Thurston Moore and Dutch band The Ex together with punkish avant-jazzers like Chris Corsano and Nate Wooley for four days of virtuosic noise.

For the coolest parents at the Kita: By The Lake (Aug 13, Weissensee). The kids can run around the bleachers or have a swim, when you’re not lecturing them about the importance of krautrock pioneer Michael Rother or trying to arrange a playdate with the offspring of Efterklang.

For Stockhausen fans who want to branch out: Berlin Atonal (Aug 16-20, Kraftwerk), where an “octophonic” composition from the late maestro is an exception to an experimental lineup that’s refreshingly light on white dudes.

For those curious what the guy who did “Klaps auf den Po” will do with government money: Pop-Kultur (Aug 23-25, Kulturbrauerei). The city-funded fest features a “commissioned work” from braided Köpenick rapper Romano amongst a grab bag of concerts (from Liars to Jessica Pratt), DJ sets (Gudrun Gut at Prater!), discussions and more.

For hipsters with secret Renaissance Faire leanings: Alinae Lumr (Aug 25-27, Storkow), in which The Notwist, Deerhoof, Dear Reader and friends storm a medieval castle and the lakeside Brandenburg town surrounding it.

For sensitive bikers: Pure & Crafted (Aug 26-27, Alte Kraftwerk Rummelsburg). Interpol, Car Seat Headrest and Gurr (stay tuned for our interview) would seem unlikely headliners for this BMW-sponsored festival of “motorcycle culture”, but even the manliest men have to indulge their inner moody teen sometimes.