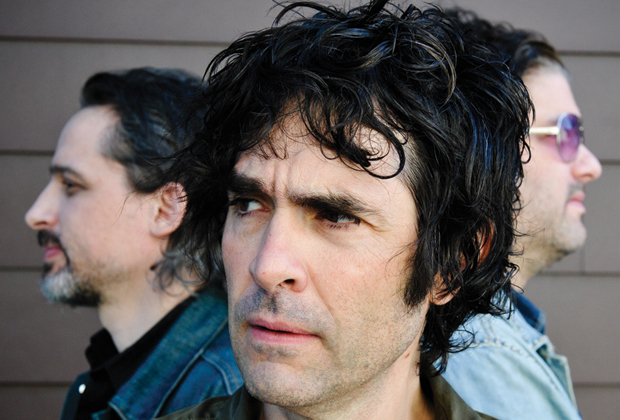 He’s the linchpin of a duo of legendary detritus-shifting rock ‘n’ roll acts (scum-rock keystones Pussy Galore and current outfit Blues Explosion, which ushered in the White Stripes era and is now going on over two decades).

The latest revival meeting Jon Spencer has been engendering is that of his own band, with last year’s Meat + Bone (Mom & Pop Music) their first album of new material since 2004. They’ll be blowing up Mr. Dynamite on Wednesday, May 1 at Heimathafen Neukölln.

Back when you started Blues Explosion, there was this concept of authenticity that white or middle-class listeners (whatever that might mean) would associate with the blues. That seems a bit ridiculous today.

Well, that might have something to do with the fragmentation of music and popular culture that’s going on with, you know, the internet and the way in which people are inundated and consume media now. Back in the days of Pussy Galore and the Blues Explosion, you’d get these journalists going on and on, struggling with these ideas of genres and combining things and crossing lines. I had to spend a lot of time explaining or talking about this and it didn’t seem to really be a problem for me, you know. A lot of these people who were, I guess, older than me, were really hung up on it. And you know, now I don’t think it’s such an issue; people don’t see these lines anymore. You know, they listen to one thing, listen to another thing, and it all just kind of goes in the same pot.

Pussy Galore also incorporated blaxploitation culture. Were you trying to make a commentary on the way race is perceived in America?

I think with Pussy Galore, a little bit, yes. With the Blues Explosion, no, not so much. We were in love with Hound Dog Taylor and Little Richard and R.L. Burnside and we began to be attacked as a minstrel show. I began to respond in certain ways. The live album Controversial Negro, the song “Talk About the Blues”.

Do people get it now?

I think so [laughs]. You know, I don’t know. The bottom line is, I think that what the Blues Explosion does- has always been in some way confrontational and a little bit punk and a little bit experimental and it’s just a little bit edgy. But it’s not like we’re some 1970s hippy blues style. I think there’s always been this element of provocation. We’re certainly not Pussy Galore, mind you [laughs], but there is still that element in what we do.

How have your own general observations or attitude towards the blues and rhythm ‘n’ blues changed in the last 20 years?

You know, I don’t lay claim to understand it. Yes, I grew up in America and so I suppose it’s my birthright, but I grew up in a small town in New England. My exposure to the blues was via, I don’t know, some musical segment on Laugh-In or The Monkees or The Banana Splits. Blues has filtered through so many different layers and strata and screens.

It seems you have two sides to the band. On the one side you’re a tight groove band and on the other there’s sort of a satirical, exaggerated, intellectual part. I don’t want to compare you to Frank Zappa…

Eeeee. Well, I think I would have to stop right there. Zappa is someone that I don’t enjoy. Zappa, I think, is a joke; it’s a piss-take. It sounds like he has a problem with rock ‘n’ roll or popular music. You know, if you’d listen to The Residents, they’re mucking about with the forms, and it’s intellectual music on some level, but the sense I always got from the Residents is that they truly love rock ‘n’ roll, truly love pop music. And I could understand why somebody might think that the Blues Explosion is satirical or there’s some irony. You just start from the fact that the name of the band – we’re not a blues band. It’s a rock ‘n’ roll band. There are confusing elements in what we do but it is not a piss-take, it is not done with our tongues in our cheeks. Sometimes there is some joy and some humour in what we do. But, you know, it’s serious art.