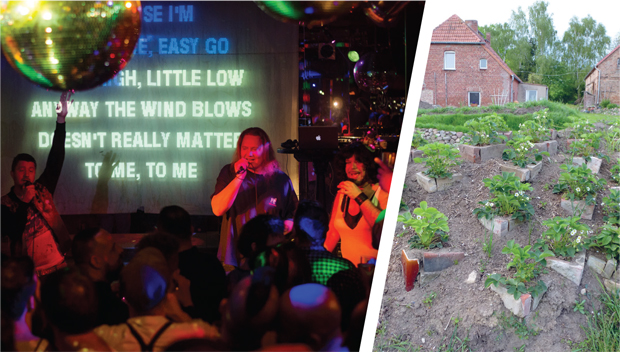 “Karaoke is a FREAK magnet,” admits Ron Rineck with a sheepish chuckle. As the founder of Berlin’s notorious karaoke bar Monster Ronson’s, Rineck has encountered his fair share of divas, drunks and delusional wannabes in the labyrinth of private singing booths and on the main karaoke stage, where braver (or boozier) souls satiate their need for public admiration.  “They take it so seriously!” he laughs. “They come to me in distress and say ‘Oh my God, that guy is singing my song!’ and I’m like, ‘Oh, really? Did you write it?’” December 1 marks Monster Ronson’s 10-year anniversary, which will be celebrated in their customary sparkle-heavy style with a surprise party planned for Rineck by his employees (oops!).  Sixteen years previous, he was grudgingly dragged to his first karaoke bar in New York, where he sang The Stones’ “Paint It Black”. Hours later Rineck was alone in the booth, two microphones in hand, begging his friends to stay.  Rineck made the move to Berlin in 1998. Back then, Kim’s Karaoke in Mehringdamm offered only a smattering of English and German songs. Sonntags in Mauerpark didn’t take over the Bearpit until 2009. Rineck started spreading the karaoke gospel by KJ-ing impromptu events from the back of his car and living in squats while “itching to open a place” of his own. “I didn’t have any money, and when you’re 25 and have a big green mohawk, nobody wants to rent you a place.”  Rineck’s hair has since calmed. In 2004, the original Monster Ronson’s Sing Inn opened its doors in a former brothel on Lübbener Straße (now occupied by Madame Claude), unleashing a nightly chorus of pissed-up partiers onto an otherwise dead-end street. After three years in Kreuzberg, it was onto the even more dead-end Warschauer Bridge – in 2008, Matrix was the only club in the area. “Everybody said, ‘This will never work,’” he recalls, “and the first year was hell. Every month my rent was getting paid later and later.” But word-of-mouth spread rapidly. “It blows my mind,” he says proudly, “that people from all corners of the Earth have heard of us.” The only uphill battle has been having a 100 percent gay night. “We host Gayhole parties every Thursday, but even on a really gay night, it’s still only half gay. That’s okay, but I know people who come in and they’re like ‘Hey, there’s all these straight people here, let’s go.’” Two years ago, as Berlin’s status as a global party mecca cemented, Rineck abandoned his city apartment and now lives “in needed peace and quiet” on his remote farm with 13 chickens, two ducks, three cats and, of course, a karaoke machine. “When I moved to Berlin it was a big empty adult playground. Now the city is too full,” he sighs. So when he’s not serenading his menagerie with “Call Me Maybe”, Rineck tends to his vegetables and delivers weekly supplies to his employees when he returns to man the doors on weekends. The farm has increasingly become his stage – the lure of the neon lights and disco balls replaced by a satisfaction in showing city-folk that “there’s an alternative to buying overpriced groceries that may or may not be good for you.” “I don’t want to be in nightlife my whole life,” he says. “I’ve made a lot of connections with other farmers in the region, which is exciting. Having this farm is my practice career change.” But there are some aspects of country life this city boy hasn’t quite adapted to… “Ugh, gross, my cat just brought a mouse in!” he exclaims. To the cat: “You’re gross!” 10 Jahre Monster Ronson’s, Mon, Dec 1, 19:00 | Monster Ronson’s, Warschauer Str. 34, Friedrichshain, S+U-Bhf Warschauer Str. Originally published in issue #133, December 2014.