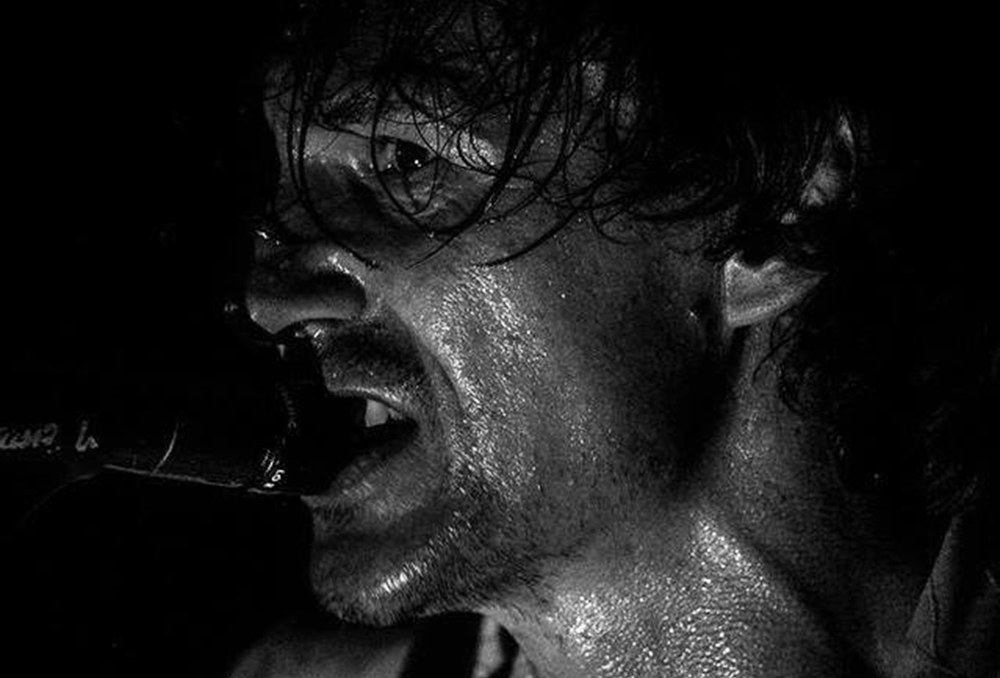 Upon his return to the stage, Patrick Wagner of noise rock band Gewalt talks about the cruelty of hipster coffee and the solidarity that helped overcome his fears.

In the 1990s Patrick Wagner had hit the jackpot. His indie label Kitty-Yo, home to Peaches and Chilly Gonzales, was a worldwide success, and his noise rock band Surrogat was on course to stardom as well. But it wasn’t meant to last. In 2003 he split with Surrogat and Kitty-Yo folded three years later. When his attempt at running another label, Louisville Records, failed in 2010, Wagner disappeared from the music scene entirely. He started managing a youth football team and brought the FuckUp Nights to Berlin, encouraging people to talk about their fears and business failures. Luckily for us, Wagner finally returned to the stage together with Helen Henfling and Yelka Wehmeier in the guise of Gewalt. We talked to Wagner before the “violent” noise rock trio’s not-so-regular gig at Kunstverein Neukölln on June 17.

You’ve been away from the stage for so long, what made you come back?

I haven’t been making music for 13 years or so because I had become scared of two things: the stage itself, and that my lyrics weren’t good enough. When Helen approached me telling me she was also nervous about playing the guitar, we said, okay, we’re two angst-ridden people, let’s get a rehearsal room. So we went and wrote “Pandora”. The experience of writing this song was very powerful. We both had goosebumps because neither of us knew what would happen. It was clear we had to give in to this violent eruption. Gewalt is larger than the sum of its parts – also it is big enough for us to hide behind.

Where is all that violence you’re talking about?

It’s everywhere. If I have to go out and get a coffee for €3.80, that’s violence. If I want to drink that coffee, I have to do everything wrong in my life. I need to take a shitty job and live in a gentrified neighbourhood. All this for a damn coffee. That’s crazy. Just look at how many people go to therapy or take Prozac. We are functional beings in sick employment relationships.

Many see employment as offering them security, though.

But that’s a lie. Then you’re afraid to lose your job, to fail and to tell your colleagues and bosses the truth. You degrade yourself to an I-hope-I-don’t-do-anything-wrong kind of person, and you start wasting your life. Why would you do that for illusory security? Allianz is the biggest insurance company worldwide. Imagine how much fear that embodies. Their assets are a measurable quantity of our fears.

Any Berlin concert memories that stand out?

In 1988, I saw Nirvana live, together with 60 people in Heidelberg. Thanks to my music taste I’ve been on the sidelines since my youth. When Nevermind came out in 1991, I’d just moved to Berlin, and thanks to their supporting act Urge Overkill, I was on the guest list for their sold-out gig at Loft. 3000 people without tickets stood on Nollendorfplatz only to be in their vicinity. Urge Overkill’s drummer Blacky led me through the crowd and directly into the backstage area. I was 21, and for the first and only time, I felt right about myself and my music taste. I was mainstream.

What about your show in June?

Our concert at Kunstverein Neukölln is not a regular concert. The exhibition there is called Inseln, and the artist asked us to play our song by the same name. It’s not part of our set list anymore because we were a little bored with it. It’s just too bluesy and conventional. But now we’re going to play it 10 times in a row.