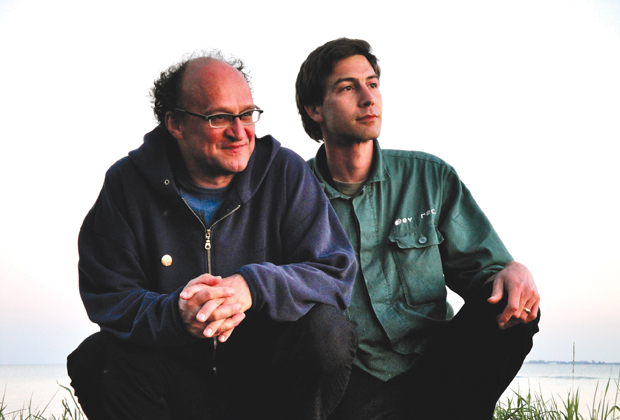 What started out as a Teutonic riff on downtempo has evolved into the world’s finest Alpine dub group, as HEY Ø HANSEN – the partnership of Helmut “Hey” Erler and Michael “Hansen” Wolf – has become one of the more idiosyncratic acts in Berlin, embracing the roots of their native Austria, as well as picking and pecking aesthetic traits from all corners of the globe.

Having moved here a decade and a half ago, they’ve been embraced by the avant crowd as well, as witnessed by their gig at Ausland on September 3, in tandem with F.S. Blumm’s Quasi Dub Develop- ment Duo.

They chose to communicate with us in one voice, Hey typing, Hansen cooking.

Surely, as an Austro-Alpine dub band, you must have begun as a joke.

The correct term is ‘Austro-Dub’ and it means to feel desperately alone in the world. It is definitely not a joke – not at all. Austro-Dub is very serious. Very, very serious.

Why do you think that Germans and Austrians like dub and reggae music so much? There don’t appear to be any roots for it in the Kultur.

And what about folk music? Not the Musikantenstadl thing, but the real genuine thing: same intonation, same offbeat, same feeling. Different haircuts, though.

But then how does one reconcile John Holt and Heino?

That is truly a very bad question. Reggae is not dub, and Austria is not Germany. And, if one tried to do that – a Heino/Holt/Hey Ø Hansen union – it would be a nightmare. But, well, we are up for serious nightmares.

I suppose a lot of krautrock, such as later Can, was also influenced by reggae.

Mr. Hansen likes the Can song “Yoo Doo Right” in the version of The Geraldine Fibbers, if that answers the question? Generally, German stiffness is a bit strange for Austrians.

Any feedback from Jamaican listeners?

No feedback. No listeners. No distribution. But we have a Jamaican singer at the moment: Jazz’min Tutum. She likes it.

Berlin isn’t the easiest place to make a living as a musician.

No money, no honey. The audience participation part is always missing. But Berlin is sometimes awesome and most of the time unique. Even after 15 years we like it here, more or less – maybe less in the last year. But we stay. Hey works as a mastering engineer in a well-known vinyl cutting room [Dubplates & Mastering]. That helps. Hansen is a painter. That helps, too.