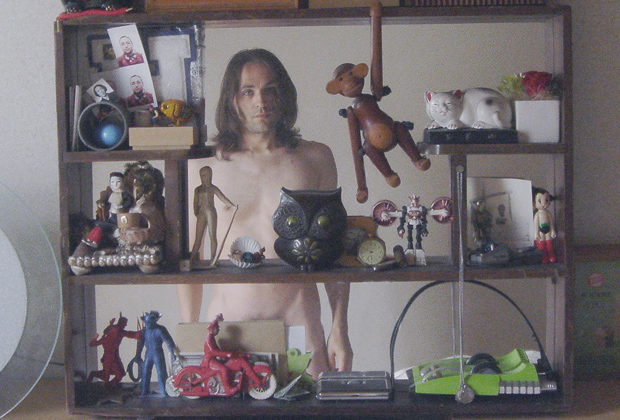 Terre Thaemlitz. AKA DJ Sprinkles. He is many men. And many women. And many others. But, most importantly, his contributions to the world of electronic music are vast and continue to resonate. From his beginnings as the genre and gender dodging DJ Sprinkles in the New York house scene, where his Deeperama parties were part club, part transgender performance affair, to his Rubato series with piano interpretations of artists like Kraftwerk and DEVO, to his new project based out of Japan, Thaemlitz’ endeavors have always been an academic undertaking, albeit with a dash of flash. His writings and lectures on queer topics have an equally large influence, being recently published in Tim Stüttgen’s reader Post/ Porn/ Politics. That Thaemlitz can shift mediums like identities without a loss of fidelity that makes him so important. His newest project K-S.H.E., Routes Not Roots (Skylax Records) is no exception.

You work in many mediums, but initially you started off as a music artist.

I wouldn’t use that phrase [artist] at all, I don’t consider myself a musician, I identify as a consumer, a producer in a constructivist sense. I don’t play an instrument or anything. I’m just working in the “music marketplace” and am someone who is cutting up and regurgitating things that I have ingested while growing up.

How do you characterize you output?

But once the product is consumed?

There are two things going on in my mind when I’m working on a project: I’m trying to think about my own relationship to culture living in a First World, post-industrial, patriarchal, sexist, fucked-up, homophobic, shit-hole and trying to unpack the contaminations in my mind. And the other thing is thinking about what would have helped me when I was growing up. I would have liked things that had effort put in and came with text that explained things and had crazy non-mainstream ideas that were sarcastic and referential and had samples. I’m not about mass appeal at all, but hyper-specificity, an album that’s really for transgendered, outsider, misfit, suicidal freaks. I don’t even know how to make pop music or anything, because I never liked it. My attempts to be accessible always fail and I think the only way I could envision mainstream success is as a smartass (which is actually I think how a lot of pop music producers actually approach it anyway).

So you don’t compartmentalize yourself?

No, it’s more like I’m confused and I’m trying to work through something, the K-S.H.E. album was very much about me trying to work out what it meant being a white DJ playing black music in Japan, and being an immigrant here and the dynamics there. It’s a thought process about my own roots, too.

Can you explain the (new album) title, “Routes Not Roots”?

The idea is trying to get away from roots or the idea of natural identities in music, natural identities around anything, sexuality, gender, whatever. So instead of always looking for the one root of a musical idea and exactly where and when it was, to see them more as routes, and that all ideas are connected with many paths of history, past ideas and different personal.

And it was made during the time that I had a residency at Club Module here in Tokyo and it was a rather asexual space. The nice thing about the Japanese house scene is that people really come to listen, which of course is very different to what I was used to in New York, which was more about the cruising or sex scene and that whole element. This has really freed me up and let me do things that I wouldn’t have been allowed to do in the States, my reputation in New York seemed to always be that I got fired for not playing accessible enough music.

So I got to thinking, “What does it mean for me?” – a man with connections to the gay/lesbian/transgendered scene to be playing this ostensibly black music – that for me has such a strong African-American connection – as a white DJ in Japan for a kind of asexual Japanese audience. I was thinking about these when I was DJing and wanted to do a project that referenced some of these assumptions and stereotypes about what house music is and where it comes from and also about my connections to it as a boy from the countryside in the American Midwest. A lot of the loops on the album come from white bluegrass music as opposed to soul and jazz and that sort of stuff. So it’s also about the contextualization of these elements, America has this system of the dual musics that are always dueling with each other and feeding off of each other. And even today in the post segregation era it’s still totally a segregated country and I wanted the album to reflect this.

You deal with race a lot on the album and that although this is electronic music it is still organic.

That also relates to the roots theme but in a kind of critical way. It’s not the idea of the roots but how we build meanings around these roots. Really music is just a series of symbols and if you arrange them in the right order they can project a meaning but not in a definite sense. We created these meanings based on such things as what section we bought it in the record store, what friend recommended it to us, what club we heard it at: all these things that pollute the way that we experience the music as a consumer. I think consumerism is still the primary way in which we relate to music, especially with electronic music if you think that is it not about performance but about a recording.

The ideas of race also relate to my project ‘Love Bomb’ from a couple of years ago. People wonder why I always invoke this American way of talking about race that always boils down to this basic idea of black verses white. It’s a critical thing for me as an American, because I have been indoctrinated into the American way of thinking.

This record takes on a new musical identity – K-S.H.E (Kami-Sakunobe House Explosion). Is this another identity for you?

It’s the neighborhood where I live, Kami-Sakunobe. It’s like saying Kreuzberg. Although no one has really heard of it, so when Japanese people hear the name they think it’s some deep country place. And one of the puns in that is “KC and the Sunshine Band”: Japanese people say the letter “c” as “she”, so it’s adding kind of a transgender reference in there or adding a feminine element to it. And placing it here is deliberately placing it outside of the big Tokyo house scene, identifying it as clearly something else, something even overly localized.

It seems the artist’s identity can be as fluid as any other kind of identity.

You can have these different names and its ambiguous if it’s one person or if it’s a band or whatever. The best interview question I have ever had was an email interview and it was “How many people are in Terre Thaemlitz?” That’s my real legal name, and they thought it was a stage name or a band name or something, it was great. I like this idea that all these different names can reflect different parts of us instead of just pushing on gung-ho with one thing. After the DJ Sprinkles stuff got so much attention I felt there was always a danger that they would say “Oh, now Terre Thaemlitz is DJ Sprinkles” but I don’t want that. I just want them to critique it just like anything else. I want to actively go against the industry ideal that you must follow up on everything!

You might say the record’s identity is fluid. Each track has its own direction.

I definitely wanted to tie in some kind of oral history stuff. I’m very interested in the crossover between theory and oral history. Oral history doesn’t have to be so stupid and anthropological as people want to make it and theory doesn’t have to be as textile as people want to make it. I have been doing some radio plays in the past and that helped me figure out ways to get speech into the actual audio itself. This has always been something I dread about music, it can be so romantic and vague and lack any kind of direct purpose, that’s why I always have these long bits of text with the records and as much as possible try and put it into the actual audio itself, especially if that is in a club environment. Clearly nobody is going to be reading anything!

Can you talk about your use of found sources on the record?

Some are found and some are recordings I made myself, some really important media for me as a transgender person growing up: music samples from country, house, jazz, folk, everything. It’s really a mish-mash of all different sources, from underground to dominant culture. In this era you see people going online and trying to name every sample without giving enough thought to the producers themselves who might be working on no budget. A lot of the time they will identify the sample incorrectly as Van Halen or some huge project that is totally off base and you have to worry about publishers getting on your ass about that. It seems everything has gone crazy since the post 1990s Puff Daddy-thing, pop music and stuff and the industry has become so terrorizing. That’s why I choose to use terms such as “found sources”, it is never out of any disrespect for the origins, it’s disrespect for the industry that wants to stifle us.

You said it gets dangerous when people try and figure out what samples are being used, but the average person wouldn’t really know that.

No, you’re right; they don’t, especially the younger generation who missed out on the debates about samples. I think people who are aware of this issue should post it on the blogs: that we are hurting these [producers] by doing it. And I know that goes against the current internet mentality of just throw it all out there and use it however you want, but I think there is something to be said for holding certain things back and using it in appropriate ways as opposed to throwing it into a huge piss pool and hoping someone will filter it out. It means a lot more when something is passed illegally to a friend rather than someone who is just downloading whatever because they don’t know what it is and just trying to fill up their hard drive. We all know what happens, it erodes the cultural and social values or the stuff and these asshole companies really do get them in trouble.

Do you think things will change?

Only for the worse. I would like the listeners of music to think of sampling more as metaphors and footnotes. And remember that the way some people sample is in trying to represent histories, or creating new histories or showing something in a completely twisted way. That’s something that people should share but people should share safely and I don’t think blogs are safe anymore.

I really think that you should treat the things that you truly respect differently and value something other than budgetary means. I mean we aren’t talking about an Elton John album that instead of selling 2 billion only sold 1.7 billion, that’s a totally different world than some dumbass producer like myself who is just getting by.