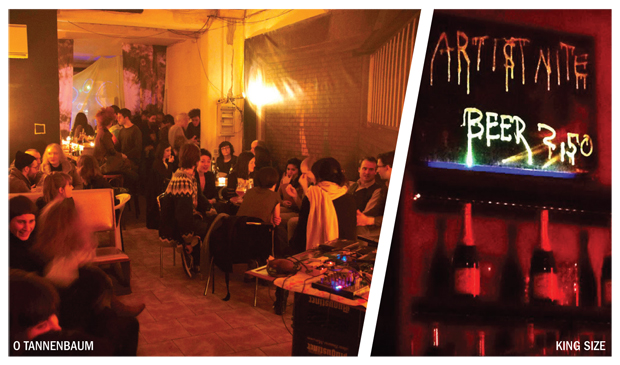 You can trace the trajectory of Berlin’s development through its bars: dart and Korn-centred Kneipen in the early 1990s, techno Wohnzimmer filled with the results of East German BSR scavenger hunts in the late 1990s and, as the pooling oil of bohemia slowly seeped over the border at the turn of the century, an increasing number of artist bars to pen up all the pent-up art world types.

But what is the art world, when it comes to Berlin? Aristocratic gallerists partaking of La Dolce Vita? Or garret-dwelling students living La Vie Bohême? We’ve recently seen the closure of two legendary Berlin bars that broached the polarity of the art world high and low: Schicky Mitte’s King Size and Penner Neukölln’s O Tannenbaum. Of course, that division is, by now, mostly illusory.

Still, in a city that’s accustomed to temporary spaces, these two venues held their ground (and the illusion) for the half-decade that began with Easyjetset hen parties broaching Berlin’s down-and-outers to the current state of wholesale cultural slaughter. They were throwbacks to a decadent time and their previous iterations (and that time) will be missed.

Though the tiny Friedrichstraße spot was conceived as a nexus between the art world and the old Rio crowd (Opper’s former spot, Scala, was located next door), it was on Wednesdays, as arranged by the gallerist Martin Kwade, that up-and-comer artists might afford to drink, just as the movers-and-shakers could vampirically taste of their freedoms. Adds Gray, “I could fart in the mic, do a line of coke and play an indie record, and people would still cheer for me.” As expected, King Size saw its demise thanks to ongoing complaints about the noise it generated on a typical night. It has been alleged that it was a single resident of the premises looking for a shakedown. She has been left with as little as the rest of us.

O Tannenbaum, run by a trio of artists-cum-alcohol entrepreneurs and a linchpin of the extended-tour scene, will apparently abide, a five-minute walk away from its closing location. Starting out as a collective showing movies and making meals, by the time it moved to a pretty tree-lined stretch of Sonnenallee, it had become a centre for the UdK crowd who had taken over Weserstraße — in retrospect, our last creative barrier before the mobs. While King Size spun Michael Jackson and Falco, Tannenbaum, bedecked in cheap Christmas decorations, old drum skins and various homemade projects, fostered a Sun Ra/William Burroughs vibe.

One person who is not waxing philosophical about the end of O Tannenbaum is co-owner Pieter Kock, who said he’s not surprised, nor even particularly concerned, that the contract was ended. As someone who lives above the bar itself, he’s sure that noise complaints played a part in the decision.

“Even when it’s a quiet bar, noise complaints are completely legitimate, especially when people start gathering on the street outside the venue,” he explains philosophically. He claims to have never heard the real reason for the closure. This would appear unlikely, but that’s O Tannenbaum, like King Size, a relic of Berlin’s recent, more ambiguous past.