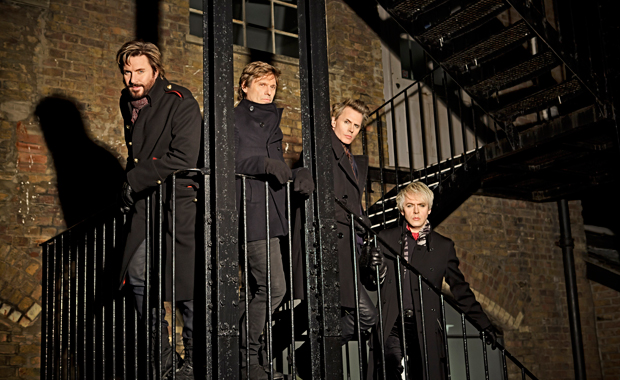 Retaining the aged good looks and glamor of a 21st century Rat Pack, Duran Duran fear not the Pop Culture Wolves of Today. Following the Mark Ronson-produced All You Need Is Now (earMUSIC) and an MTV-censored video for “Girl Panic” by Jonas “Smack My Bitch on the Spun Telephone” Åkerlund in which the band is played by the world’s top supermodels (Senior Division), drummer Roger Taylor keeps killing the radio star and, one imagines eventually the blogger, as well.

The catsuits begin their unzipping Tue, Jan 31 at C-Halle.

You’re still portrayed as a fabulous, jet-setting band, even during this economic recession. Are you part of the pop music “1 percent”?

Well, funnily enough it was the same when we started. It was a very tough time in England – financial depression, there were riots in the streets, there were strikes, and somehow we managed to continue on, as we were, without being affected by that.

I don’t think it’s an image that really we try to project, I think that sometimes people like to project that image on other people because it gets people out of their everyday monotony, I think people have to have idols they think are living this lifestyle, very much like the matinee idols. I mean, America can be in a great depression and then these amazing glamourous movies that will take them out of there.

But you guys were pretty involved in the shaping of your image.

I guess. Our life is probably not much different to any other band out there. I think it’s the videos, really, that made this perception that we live this super glamorous lifestyle, which of course wasn’t really true.

Such as in Jonas Åkerlund’s video for “Girl Panic”. How was it working with Jonas?

It was great, actually. We’d actually worked with Jonas before on a commercial but used “All You Need Is Now” as the soundtrack and we really liked what he was doing and sort of tracked him down to see whether he would work with us again. I must say the results were amazing.

I mean, we don’t set out to particularly make anything controversial. We wanted to make something that was great for the song – tasteful and glamourous. And I think maybe he picked up on the kind of vibe of the history of the videos and the “Girls on Film” video and kind of integrated that into this one. It worked. And it shocked a few people. A bunch of 50-year-old guys can still be shocking.

It’s very much on the continuum of Duran Duran using video as an expressive medium.

It is, actually. Whether we like it or not, it’s part of our persona. We’re never going be Radiohead or U2 or anybody else. We ARE Duran Duran and this is part of our fabric, I think. Nobody else could have done this video. You couldn’t imagine Coldplay doing it. You couldn’t imagine U2 or Depeche Mode or one of those bands. So it was very much part of our fabric and it was very clever that Jonas saw that and made it contemporary.

And you send up the band.

Yeah, if you look at the early videos they were always a bit goofy. We never took ourselves absolutely, deadly serious, and I think it was important retain some of the humour that those early videos had.

Helena Christiansen played you as a party animal.

Although she was supposed to be me, she was generally taking on the image or the role of the drummer in a band. I didn’t think it specifically related to me. I mean I’m not a Keith Moon or Charlie Watts.

Speaking of true or not, it has been reported that aborted album Reportage [recorded during the 2006 split with original guitarist Andy Taylor] is possibly your next album.

It definitely won’t be the next official album, but we’d love to release it at some point. We like to think of it like our Bob Dylan Basement Tapes. It will see the light of day but there is nothing planned for it at the moment.

How was it working with Mark Ronson?

We’d met and we’d played a show with him in Paris, a couple of years earlier. When you just meet somebody and they’re just on the same wavelength, have the same sensibilities, the same humour, it’s like “Oh my god, we have to work with this guy.” It was fun, it was enjoyable and it was just where we needed to be at that point.

Was he an involved collaborator?

Mark is very hands on. He reminds me a little bit of [Chic guitarist and “The Reflex” producer] Nile Rodgers actually – in fact, that he actually gets there in the studio with you and he brings his guitar in and gets down to the nitty-gritty of making the music. You tend to think of Mark as a celebrity DJ or something but he’s actually a great musician. He knows music backwards. He knows all about bars, a bit of notation. He’s a bit of a genius, actually.

I think that Mark kind of looked at the history of the band, went back to what he thought was the most productive period, which was obviously the early 1980s, and really took a lot of time researching how we made records: how we recorded things and how we recorded vocals, how did we recorded the drums, how we approached the song writing, and kind of brought that right into now. Obviously, with Mark being a contemporary producer, it was a very interesting mix. It hit the mark with the fans and you’ve gotta get your hardcore fans first because if you don’t get them you’re in trouble.

For a record that’s called All You Need Is Now, you look back a lot to the 1980s.

We like to think it’s more about today than yesterday, although we did look very carefully at where we came from. I think it is a statement for today. Who wants to be stuck in the early 1980s? Even 30 years ago, we were always trying to look forward, always trying to be contemporary. And it was very important with this album. All of our albums were about now.

“All You Need Is Now” wasn’t really thought out: it was part of a lyric that was picked out and we just thought it sounded like a great album title. The more you kind of think about it the more important it is as a title. Because it is something we try to live by now, especially with the history that we have. It’s very important to us to stay in the now, looking forward, to progress as a band.

We kind of went for the jugular of popular culture when we started and it felt very good, particularly in America, to be part of popular culture. It felt very powerful. It had its downsides, of course, because our private lives became public, and that was kind of hard to deal with. We couldn’t walk down the street at one point without somebody coming up to you. You walk into a store to buy a pair of shoes and the sales assistant would be virtually fainting and screaming. It was very difficult to live what I would term a normal existence.

It’s much easier for us now. I mean I’ve just been walking round Vienna and nobody really gave me the time of the day, which is cool.