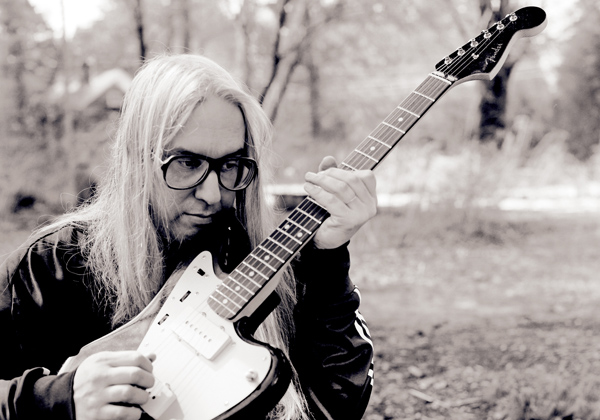 FROM THE ARCHIVES. Dinosaur Jr. bandleader J. Mascis will be blasting Festsaal Kreuzberg on Thursday, July 14 – hopefully without the head cold he had in this interview from September 2009.

Rising from the last burst of SST mid-1980s post-hardcore greatness, the J. Mascis-led Dinosaur (later sued into adding the Jr.) merged Neil Young-ish lyricism with metal ferocity and a mournful wistfulness: Mascis was just as comfortable playing with Sonic Youth as he was covering Peter Frampton.

The original Dinosaur, Jr. fragmented at the turn of the 1990s – bassist Lou Barlow would make his name in all things Sebadoh-y – and Dinosaur, Jr. became Mascis & Co. even as he also performed solo, and recorded with Sonic Youth and My Bloody Valentine’s Kevin Shields among others. He’s also maintained an interest in Indian music and the teachings of Sri Mata Amritanandamayi Devi.

With American guitar music on the underground upswing, the canonization of Dinosaur, Jr. is complete, and Mascis is a Grand not-quite-Old Man of Indie. The original line-up reunited a couple of years ago; their second reunion disc Farm (Pias) is garnering them some of the best reviews of their quarter-century-long life. Mascis, who still lives in the posthardcore center of Amherst, Massachusetts, is legendarily laconic, and appeared to have a head cold. But he spoke with us.

Are you from Berlin, Massachusetts?

’Cause there’s a lot of Berlins around here.

Your wife is from Berlin.

Yeah, my wife speaks to my kid only in German. She talks a lot more than I do, so he’s speaking mostly German, I guess, now. She’s teaching the kid weird German words and stuff, so it’s funny.

Not too good. As long as she isn’t speaking to you only in German. Yeah. It’s hard to learn it in Berlin, because no one will speak German to me. Um… I don’t know, I’ve been there so much, it’s sort of like my second home or something. You know, to me it’s just people that I met there mostly, family and friends I think about, mostly, when going there.

Do you pay any attention to the music scene or the nightlife scene here at all?

Uh, just through kinda like my brother-in-law . You know, I don’t know too much about it. Certain places, I always would go. But you know, um, it’s definitely a lot different since the Wall came down [draws it out]. It’s, uh, yeah – I can’t imagine how I could learn German in Berlin, really.

So what can the audience expect for the Berlin gig?

Good times, hopefully. Um, yeah, I guess it’s a new club or something. Have you been to this place? My brother-in-law just went there. He said it was pretty cool.

You were vacillating about recording a second reunion album. What pushed you to do it?

Well, you know, we all felt psyched up for it, I guess. We just assessed whether we wanted to do anything, and do the mixing, and everybody seemed up for it. It’s just a feeling. It’s like, ‘Yeah we wanna play some more gigs, so we’ll need some different songs, and a new album.’

Did you find that you wanted to spend more time with one another?

How about as musicians?

Do you find that playing the old songs together all these years later brings a new perspective?

I don’t know. [sniffs] Um, like the first album, I guess there’re so many parts to every song – somehow that’s what I was into back then. Just like, ‘If it’s got a lot of parts that must be good’, I guess. Or I think I saw Al Green once on some TV thing, and he was saying, like, about “Tired of Being Alone”, like “That song had so many chords in it, it had to be a hit record!” But I don’t know [sniffs].

It was either that song or “Let’s Stay Together” that [producer] Willie Mitchell pieced together with him line-by-line.