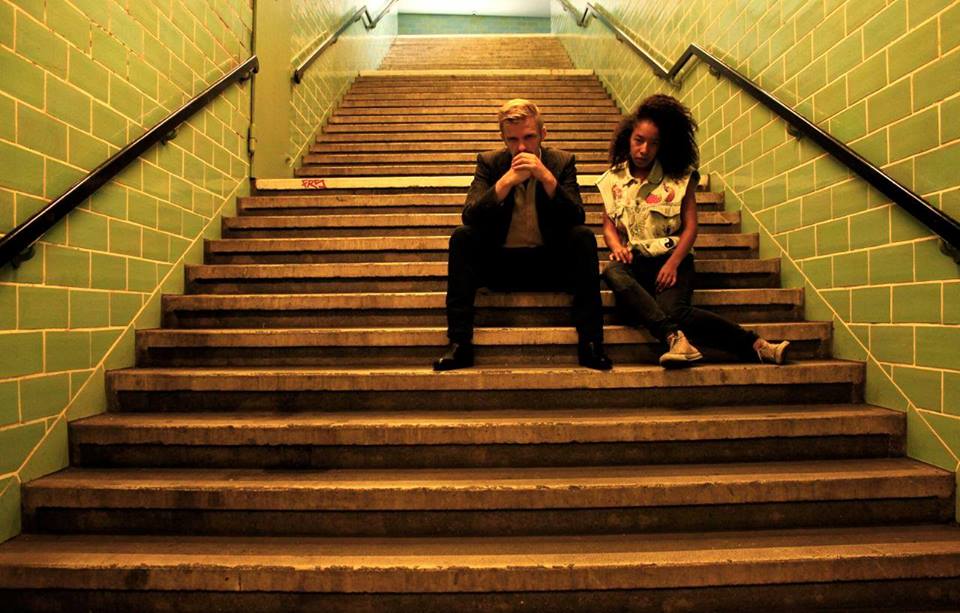 Belgian Neuberliner Joy Adegoke and Wim Janssens – partners in love and art – are Joy Wellboy. Their beautiful second album Wedding (released on Bpitch Control in early May) is filled with a dreamy and dark pop, simultaneously fragile and potent, bleak and hopeful. The tracks were inspired by the gritty northern district of Wedding and recorded in the couple’s apartment there. Joy Wellboy headline Exberliner’s 13th birthday party at SO36 on June 5.

How long have you and Wim been performing together as Joy Wellboy?

For six years. I saw Wim on stage and I loved the way he was playing. He was involved in different projects and I was also in some bands but it never felt complete. When we met, I was like “where were you all this time?”

Why did you make the move from Brussels to Berlin two years ago?

We recorded some acoustic versions for some videos we shot in the desert in California and Ellen Allien [head of Berlin’s Bpitch Control label] saw these videos and she wrote me a personal message: “I love what you do. I would love to help you!” I contacted her and we went to Berlin and we talked with her for half an hour. I remember when we were walking through the streets, I thought, “This is an energy that I really like. What have I been doing so long in Brussels, because Brussels is really suffocating.” When I came out of the [Bpitch Control] office there, I thought, “This soul is matching with my soul.” And then we played a show at Berlin Fashion Week, so all signs were saying that we had to come. It was also cool to be near the label. And it was time to leave Brussels, because Brussels was not really supporting us. It was the best decision we made.

Why do you think?

If we had stayed in Brussels, I think we would have stopped making music. Everyone there was always really enthusiastic about us, but nobody was really doing something. In Berlin I have the feeling that when they say they will do something, they do it. Our booker at Melt! Booking is really nice… everything clicks. In Brussels everything was slow, we had to make a massive effort to motivate people.

Something about the style of your music fits perfectly to Berlin…

Yeah! It was much easier to make the second album than the first, because we were in Wedding and we love Wedding! We had so much inspiration there. We went swimming. We didn’t need a lot. Everything was there. We were always broke, but it doesn’t matter when you live in Wedding. Everyone is always making fun of Wedding, when we actually really love it. Everyone is normal there. When you go into a cafe, there’s not a lot of fuss and tralala. It’s super basic, and I love that. You don’t have to pretend you’re somebody else.

What do you find inspiring there?

I don’t know, it’s like some places are stuck in the 1980s. And I love the energy of the 1980s. Like there’s this one club we really love, Slaughterhouse, where they have Cure parties! It’s really cool. That’s not something you can find in Belgium. And you have space to let your ideas boil. I feel like inspiration is hanging in the air.

Where do you live in Wedding?

In Samoastraße. In the “African” neighbourhood. It’s funny because I’m half-Belgian, half-Nigerian. And next to the African quarter is also the Belgian quarter in Wedding! And I live on the edge of both. I don’t know if that’s a coincidence or not.

How has your sound developed with your new album?

I think it’s more coherent. It’s more about us. And Wim and me. The first album was more me asking Wim to produce. So that’s a big difference. We produced this one together. I started to play the bass and he started to write also. I think everything blends better, because it’s closer to our heart. It’s really our story.

Yes, but we also tried to make it hopeful. For example, “I Just Want To Fall” is not really about pain, but about seeing where you will go in the eyes of someone else. It about how you understand yourself better because you’re with someone who’s really good with you, who’s a good combination with you.

You picked out a complicated one! I wrote it when I was really depressed and it had nothing to do with Wim. I was just waiting for someone to get me, you know. You can put it in a bigger context: you could see it like a fight between two lovers, like, “Hey I’m not hurrying up, you just have to wait, when I’m ready I’m coming.” But you could also see it like: “What could I do to escape these dark feelings, just come and get me!” – like you’re talking to the universe. I think with a lot of songs that we write you can put it into a bigger context, or see it as a couple thing.

The audience can project its own meaning onto it…

After a concert in Hanover a girl said that it saved her relationship. She was talking about one line in the lyrics. It just spoke to her in another way than it spoke to me. She has four kids and it’s hard, she told me… and we don’t have kids but somehow she found herself in this song.

I have the feeling Joy Wellboy is about to really explode. You’re playing Melt! Festival this year. Are you planning to tour outside of Europe?

We’re going to Japan! Which I am really looking forward to because I love Japanese culture.

So about the name of your band… you’re Joy, obviously, but where does ‘Wellboy’ come from?

It comes from a Nick Cave song we both really love, “The Lyre of Orpheus”, which talks about Orpheus making a lot of noise in heaven. God smashes a hammer on his head and Orpheus falls in a well. Falling down, falling down. We loved this image. We love the double signification of ‘well’, like ‘well’ meaning good, but also a well going really deep. Because we think that pain is part of life. You sometimes have to cross a dark forest to go somewhere.