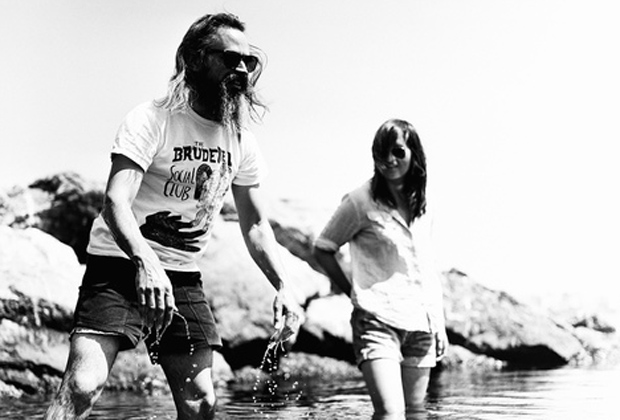 Sanae Yamada and Wooden Shjips guitarist Eric “Ripley” Johnson are eight hours in the past, driving through Utah. The couple makes up Moon Duo, a two-piece with a Kraut-y space rock sound that’s drawn comparisons to the Velvet Underground and Silver Apples – the new record is called Mazes (Souterrain Transmissions).

When I phone, Sanae picks up, sounding peppy and enthusiastic, though at times she’s drowned out by the sound of a passing 18-wheeler.

Finally, they pause at a rest stop where I can hear her better, as you can hear her band at Festsaal Kreuzberg on Saturday, October 8, with Male Bonding also on the bill.

Oh really? [laughs] I started out by learning classical piano, had lessons for years when I was a kid. Then I got tired of the lessons. Since that point I’ve been more of a dabbler, until I got into playing music with Ripley.

That really brought it back into the forefront of my life. It was a huge change; I had no idea what I was doing at first. It was so different. I was used to interacting with the piano and the keyboard in a particular way.

When you go from playing alone to playing with someone else you’re always trying to find the right role for your instrument in the music. It’s been an incredible experience.

How did you guys meet?

We met through a friend in 2002, but we became closer when I moved to San Francisco.

We would play together or just have these random jam sessions from time to time, but I think we started playing music together as a more serious endeavor around 2007 and made our first record a year later.

You moved from San Francisco to a cottage in the Rocky Mountains while you were working on Mazes.

It started out as a mostly pragmatic choice. We wanted to make the lifestyle we wanted more viable.

We wanted to tour all the time and just make a go of having the band. I was a teacher for a number of years and I lost my job last June, then we moved to Colorado.

We actually haven’t been there that much. We’ve been on the road.

Artists escaping the city for the great outdoors is a deep-rooted American cultural phenomenon, from Thoreau to Kerouac.  I read you guys meditate frequently, and there’s an entrancing quality to some of your songs.

We didn’t go in deliberately trying to make things “trancy”. For me there’s this idea of expansion through repetition that I think is definitely connected to the meditation that Ripley and I do.

We practice a form called Vipassana, which is not religiously affiliated but more about getting closer to the original teachings of the Buddha. My part in our music is kind of repetitive.

I think in meditation you’ll be still for a very long time, and even if nothing seems to be changing outwardly there’s still this change happening constantly.

I’m getting a Dharma Bums vibe…

Sitting for a long time you realize that you’re going through all these experiences and things are still happening.

I think this is true for repetition in literature, like Gertrude Stein’s writing for example. She plays a lot with the theme of repetition, that you can say the same thing over and over again, and it starts to take on a whole new meaning.

When drawing comparisons to Wooden Shjips, Moon Duo seems cleaner, crisper. You list the collaboration of John Coltrane and Rashied Ali as a big influence.

Obviously they were making a different type of music, but that inspiration of that two person endeavor is pretty inspiring as far as what we’re doing, starting at a bare bones stage and seeing what directions we can expand from there.

Having a two-piece band is pretty stripped down as it is, so it’s an interesting limitation. You kind of have to see what you can do with only two people.

I’m not sure why it’s more upbeat in character; it just came out that way.

I think the sound is fuller because we were in the studio for the first time and we were going for more of a fleshed out, rock and roll sound.

Our earlier recordings are sparse in comparison. We used to make music in our bedroom so that was more of lo-fi approach.

You came to Berlin to mix Mazes. How’d that happen?

Berlin’s become kind of a home base for us in Europe.

We played there in April, when we started our spring tour. We met these two Finnish guys who run a studio there, Kaiku Studios. We had a really good experience working with them.

I adore Berlin. There’s so much room for creatively inclined people to go there and do whatever they have a mind to do.

There’s always something going on, it’s very relaxed and it doesn’t feel like people are bearing down on you with a lot of rules and regulations like in many other places. I’ve met some pretty amazing people who live and work there.

So, what are you currently meditating on?

We’re working on a new EP, Horror Tour, which is coming out in October. It’s three longish songs; we worked on that at home and it was also mixed at Kaiku.

I’m always excited to go back to Europe; it’s a really different experience than touring in the States. We’re playing at the Reeperbahn Festival in Hamburg and then a week in Eastern Europe before we come to Berlin.