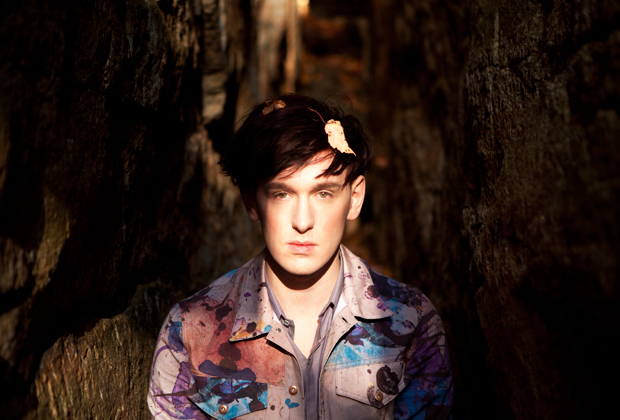 Patrick Wolf began his music career at the age of 13 when, armed with a homemade theremin, he joined infamous performance artist Leigh Bowery’s band. He released his first album at 18, and his aesthetic ambition, flamboyant live performances and clawing toward super-stardom eventually landed him a record deal with Universal. Now, on the eve of his 26th birthday, an older, wiser Wolf is going it alone again – with a little help from his fans. His new album The Bachelor and its soon-to-follow sister The Conqueror have been funded through a site called Bandstocks, where fans are asked to invest directly.

The Bachelor is one half of a double album: the second part, The Conqueror, is due out next year.

I was writing non-stop for a couple of years and when I looked back at everything I’d done, there were two types of music going on. There was a kind of lonely, solipsistic attitude and there was also a very positive attitude that came from starting a new relationship halfway through that period. The Conqueror is kind of a recovery from the depression of The Bachelor. It’s going to be my Confessions on a Dance Floor.

Tilda Swinton acts as The Bachelor’s narrator. She’s been quoted as saying you come from the same planet.

That was very kind of her! It’s odd – you know, when you see a couple together, or a good band, there’s some physical link there, and that crosses over into a mental link… I grew up with Derek Jarman films and Sally Potter’s Orlando was one of the most important films for me when I was a teenager. Then I was recording the vocals in Brixton and she was doing a Q&A next door to the recording studio. I went up with a CD and, madly enough, we were wearing exactly the same outfit, in a boy version and girl version, with our hair parted off to one side, and we were the same height (she was wearing huge high heels) and it was like “Hello!” And the next day we were in the recording studio together.

The last track on the album, “The Messenger”, was based on a melody you wrote when you were 15.

At the age of 15, I had worked through a lot of personal issues that grew out of a period of being of being bullied and becoming more confident. At the age of 24 or 25, I was in the same mode: I had worked through my whole thing of trying to be the number one pop star in England – and failed miserably – and I didn’t really feel like I had to prove myself anymore. So it was very natural to hold a mirror up to the person I was when I was 14 or 15 – that’s why there is more of an adolescent spirit in this album. I felt a natural revival of that energy.

You spent some time in Berlin producing two of the tracks with Digital Hardcore founder Alec Empire.

I spent a while with Alec Empire at his studio in Prenzlauer Berg. That was a good summer… Every time I come back here I realise I’ve spent most of the last five years travelling between London and Berlin.

My booking agent for the first three or four years of my music career was here, and my record label, Tomlab, was in Cologne, and my sound engineer was in Hamburg, so more than anything my musical family comes from Germany. There’s a huge, huge community of great musicians that emigrate here: you have your Peaches, and Joel Gibb, The Hidden Cameras. It’s a liberating place for a lot of musicians.

Did it feel risky, asking your fans for the money to finish the album?

It was quite terrifying at first. Those journalists who have never really been fans of mine took my being dropped by Universal as an opportunity to ridicule me. But the slap in the face for everyone who thought it was a joke was that within a month or two it was up to £50,000. Flattering is such a belittling word, because it was just a total honour that people believed in what I was going to do in the future so much that they would put their money into it.

But, in hindsight, I realise the most important thing is that I had lost the intimacy with my audience that I had working independently. With Universal, it was like the whole marketing campaign was supposed to make me more enigmatic; rather than actually getting a letter from me, suddenly they were sending emails out to fans asking for their mobile phone numbers so they could sell them ring tones. And so I think Bandstocks was a very important gesture – a way to get back and show everyone – that I literally just want to share music with them again.