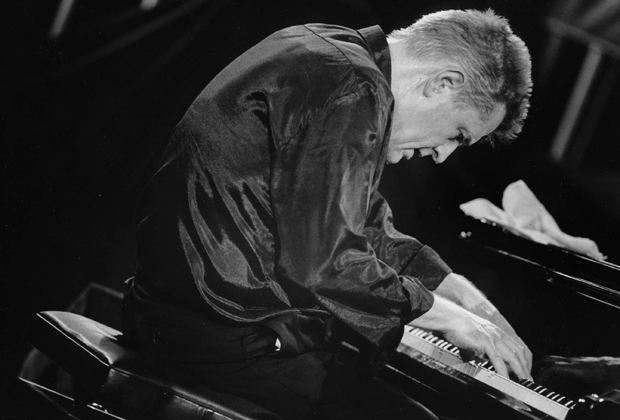 Von Schlippenbach has been closely intertwined with Jazzfest for nearly all of its existence. And it’s not just a matter of appearing early and continuing to show up – one could argue that his Globe Unity Orchestra’s Jazzfest performance in 1966 was the moment when European jazz came into its own. And Von Schlippenbach, now 76, continues to be at the heart of the festival: he’ll be performing a tribute to American great Eric Dolphy this year.

When was your first Jazzfest?

The first was, I remember very well, 1966. This was a performance of my piece Globe Unity performed by the Globe Unity Orchestra at the Philharmonie. At that time it was still called “Berliner Jazztage” and all the concerts were happening at the Philharmonie. It was the first time that – let’s call it new jazz, a kind of free jazz – was performed by a large ensemble. So press reactions were very strong, I remember some funny headlines, like, “Men have a stroke at the Philharmonie.” But there were some positive reviews as well about an exciting encounter between European classical new music, contemporary music and jazz. The whole thing was a bit sensational, a bit scandalous, and of course because of that it was a good springboard for the band’s later career.

The Jazzfest was a strong statement for West Berlin – a cultural outpost in the face of the East. How did you experience this?

Were there any new challenges for the festival when the city became unified again?

There was not so much of a challenge. But a very significant thing was the phenomenon that when we played in the GDR before, there was an enormous audience. They did not come just for the music – they came because it was something from the West. It was something unusual for them. And when we play there nowadays it’s normal, it’s not that big an audience.

What was the appeal of jazz music to a German kid? Something exotic that came after the war?

It was of course something exotic because it had been completely forbidden, all this noise. Many things coming from America were exciting for younger people my age. We tried to imitate the haircuts and the buttoned shirts. Everything, especially the jazz people and their kind of hipness, was attractive. We did not really understand it very well, but the fact that our parents and teachers didn’t like it made it more attractive… But for me it was just the music I was listening to. There is a basic power with this music which is indescribable.

How do you feel the Jazzfest has changed over five decades?

It’s changed always, of course. The first decade there was Joachim-Ernst Berendt in charge. He was our jazz Pope, as we called him. I think he was the first to write this book about jazz like he did [1953’s Jazz Book]. He ended up writing some more mystical things. Many years later he was also a Hare Krishna. He wrote The Third Ear, about taking up signals from outer space. But during the time he organised this festival it was very, very good. All the greats, everybody played there.

What is the current concept of Jazzfest now under Bert Noglik?

Jazz has so many different stylings and it’s more to the avant-garde side nowadays, but of course they want to have a good audience, they want to have sold-out concerts. And Noglik can manage that very well. He’s been bringing more contemporary music, not only last year but the year before. I do of course wish that they could take a bit more of what is really contemporary jazz, because there are a lot of things happening now and a very new generation of musicians.

Not many young people play the festival.

No, not so many. And I think they should take more care of musicians from Berlin, because there’s a lot of things happening now, in all these small clubs. I mean we have at least 20 or 30 places where you can hear this music every night. Places like Aufsturz, and have you heard about Sowieso? Most of the Berlin musicians have played there. I also play there sometimes. So I think Jazzfest should pay more attention to that. Sometimes they say “Yes, you’re playing anyway in Berlin in the small places, so you don’t have to play at the festival.” This is of course nonsense, because critics from all over the world come to the festival. Great audiences come. So these bands deserve to get heard.