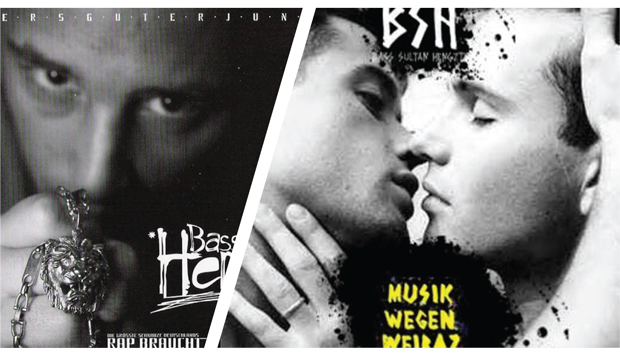 What’s hip hop without a little homophobia? From the old-schooler Big Daddy Kane proclaiming himself “anti-faggot” to fashion plate Kanye West’s “no homo”, rap has long provided a mouthpiece for society’s general anti-gay prejudices. It’s been no different in Germany, as those who witnessed Bushido getting doused with drinks at the Kreuzberg Pride festival a few years ago might recall.

But things are changing, with more rappers like Lil B and Le1f comfortable out of the closet, and the door may have opened in Berlin, as well. Take Bushido protege Fabio Cataldi, better known as Deutschrap longtimer Bass Sultan Hengzt, who recently released a “premium” version of his latest album Musik Wegen Weibaz (Music ‘Cause of Women) (No Limits) portraying two men tenderly touching one another’s necks, lips open, in anticipation of a shared kiss.The neo-Roman stylisation looks like an Obsession perfume ad from the 1990s. “I wanted to drive certain people up the wall,” crows Cataldi.

And he did. The result has been a major uproar within the scene. The media has been relentless, with reactions ranging from anonymous Facebook gay-bashing (“No tolerance for faggots #nohomo” is a typical post) to accusations of being a gay basher himself, from no less than the SPD’s Volker Beck, who claimed that “Bass Sultan Hengzt is causing a homophobic ‘shitstorm’”. Antilopen Gang responded with the gayer-than-thou “Verliebt” video, with their own Danger Dan engaged in a same-sex embrace.

Cataldi has been somewhat inconsistent on the subject. “The hip hop community has always been very tolerant!” he claims. “For outsiders who have never dealt with the scene and hip hop culture in general, it always looks more aggressive and intolerant than it actually is.” Yet, Cataldi himself has not always been so “tolerant”, rapping, to give an example from 2004, “Suck dick, you gay pig, faggot, asshole,” and one wonders if there might not be a certain amount of promotional gamesmanship involved here. He proclaims that he’s evolved. “I would never rap stuff like that anymore. It was 11 years ago, and for us teenagers it was just away to rebel and provoke people. In 2007, I had already stated that I was not so much into this whole aggressive battle rap stuff. ”The cover, then, is an allegorical middle finger directly into the faces of his accusers – a kind of now-more-than-ever-attitude.

But is this really a rejection of confrontation? Using the shock of gay pride in order to provoke attention isn’t so different from using homophobia to instigate the same. (“I’m just an average guy who thinks that people stating ‘Gay men are animals’ are Untermenschen,” Cataldi says, somewhat coyly.) Both stances declare there to be something shocking about homosexuality and both stances “other” it.

Still, to many in the rap community – to many in any community – homosexuals remain outsiders. Those that nod along to Katy Perry’s enjoyment of kissing a girl may be less inclined to approve a two-man lip-lock. And yet, with its aping of African-American street imagery, German rap enacts a form of drag that has a certain sympathy with the gay tradition. The cover of Musik Wegen Weibaz is, in its way, an extension of the gay tradition of camp.

As is the tough dude posturing of most German rappers. “It is kind of funny to see people label something ‘gay’ but have posters of greased up, eyebrow-plucking, muscular fitness-rappers hanging on their bedroom wall, ”Cataldi happily notes. That’s true. But it also underlines that Germany’s hip hop culture and its gay community might have more points of similarity than either might be willing to admit. One might record an entire album about it.