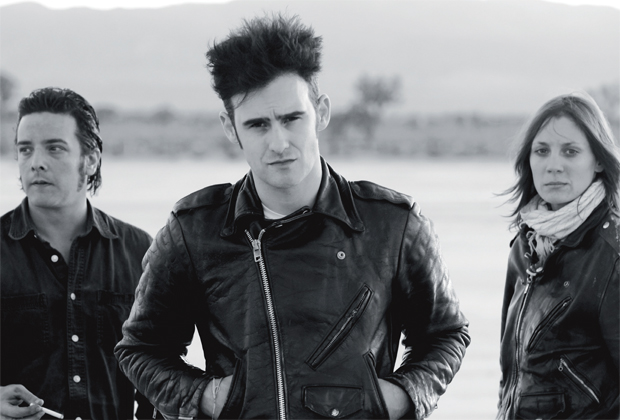 Robert Levon Been (photo, centre) and Peter Hayes formed the drone-y, neo-psych trio Black Rebel Motorcycle Club in San Francisco in the late 1990s, quickly hitting NME stardom. But fed up with major labels, they broke out on their own, gaining full control of their work.

Robert is the son of Michael Been from the 1980s band The Call. The senior Been became an integral part of BRMC’s tour crew, running their sound until his sudden death in 2010 following a show in Belgium. Not long after, family friend Levon Helm of The Band, inspiration for Robert’s middle name, passed away as well. With the shadow of loss still lingering, the band releases Specter at the Feast (Cooperative). Berlin awaits rebellion on Sunday, April 7 at C-Halle.

Your father once said, “It’s all grace and mercy and if you don’t believe that, you’re doomed. But it’s important to write about that doom.”

I agree – if you include the fact that, when he said that, he was laughing. The laughter is actually the key part of that statement: to laugh in the face of doom and to write from that place where it’s all there, it’s all alive. I very much believe in that statement. I’m always trying to prove it wrong but there’s truth to not giving up and carrying on in the hysteria of it, you know? I go back and forth between that.

You cover The Call’s “Let The Day Begin” on the new record.

We wanted to cover a Call song but didn’t have a specific one in mind. That one kinda came along unexpectedly, so we trusted that. Yeah, it’s kind of a direct way of paying respect to him. It found us before we found it. We were actually jamming on this other song. [New drummer] Leah [Shapiro] was playing this weird drum beat and we were thinking, “This might be a new BRMC song.” But that melody kept getting in my head and it fit perfectly even though the music was quite different. It kinda fell into place that way.

Speaking of falling into place, Leah has jumped right in with you guys.

When she came around we weren’t really sure, y’know? It’s the backbone and the heartbeat of the band and drummers aren’t given nearly enough credit. They aren’t just replaceable. And I never thought I’d be in a band that replaced the drummer. We even considered, when Nick [Jago] left, that we would just scrap it or change the name at the least, but we realized people would say it sounds like BRMC, so [laughs] we figured it would be kind of annoying if people kept referencing ourselves as what we sounded like. But she was the only person we called. And she was incredible. We figured we could finish out the tour we were on with her ‘cause she seemed to be able to play the old songs really well. But that wasn’t really proof enough that we could create and write together. I was kinda holding my breath for six months and then, when we actually started working on the next record, there was this moment during the song “Mama Taught Me Better”. I was playing this riff and she just let the song lift and fall at all the right moments, where Peter and I were able to add to the dynamics in the similar way that we would write on the fly with Nick. It was a huge moment for us ‘cause none of it was spoken and the song was done within like 10 minutes. That was when we really decided, “This feels like a band.”

Yeah, you don’t really ask for lightning to strike twice in the same place and we certainly didn’t expect it.

Are you always road-testing new stuff when you’re on tour?

Yeah, we always try and make time for it. We’re kicking off the tour in a few days and there’s a lot of things from this last record – I think we recorded the drums and bass for about 20 songs and we only used 12 of them. We’ll probably keep working on those on the road and finish them out, just stealing time whenever we can. Specter is the only album we’ve ever started completely from scratch. The past and future looked very different from where we were standing.

That includes owning your own career.

Well, we started our own imprint and we’re partnering with Vagrant Records once again, so it’s a very different thing than we’ve ever done. I don’t know if we’re spending more time on the road because of it, although there’s a thing that happens with a major label where they’ll give you a pretty proper tour budget but if you don’t play ball they’ll take that away any time they want, so we were out on tour and they just cut it.

That happened when you were on a major?

We were kind of left in the middle of the tour, trying to figure out how we were gonna get to the end of it. I remember that hit us really hard. That was kind of the realization that if we’re gonna have the chance to be genuinely independent we’re gonna have to go all the way with it and not rely on anyone for anything. On that tour, we pretty much just had to let a bunch of people go and strip everything down so we could afford it. I guess ever since then we’ve been trying to figure out ways to be able to afford it ourselves.

Which must feel good.

Yeah it comes with freedom but a lot of responsibility too. You can lose it, y’know. And there’s kind of more pressure on ourselves ‘cause we’ve all worked hard to get to that place. Freedom sounds like a big fancy word, but it’s at our own cost. Even making this record, producing it ourselves – you have to be your own judge, jury and executioner – makes you a little crazy.

How does your song “Berlin” relate to the city of Exberliner?

When we wrote the song, we were about to play Berlin that night. We kept coming back to it and we’d just say, “Play the one from Berlin.” And we kept calling it that. We partially didn’t want to title the song, you know? It’s hard [laughs]. At least it wasn’t called Delaware or something.

[Laughs] Jersey could work as long as it’s a song about a small town boy who’s trying to make it in the world. Someday. I wouldn’t rule it out. [Laughs]