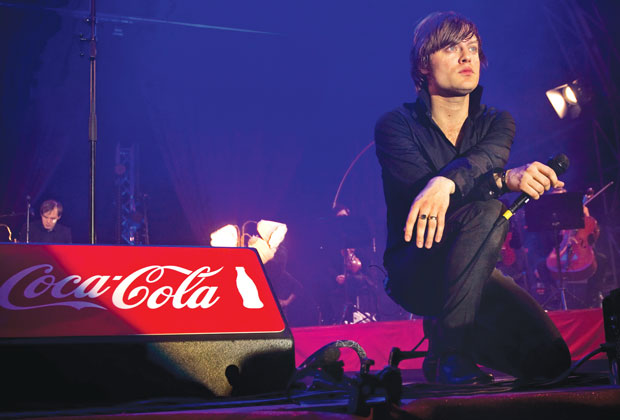 After cutting out the slackers and hangers-on, then-teenaged Swedish keyboardist Daniel Haglund and singer/guitarist Björn Dixgård (soon joined by their friend Gustaf Norén) forged a hasty skip up the world’s music charts as Mando Diao, rising over the last decade from pouty garage revivalists to Pitchfork-pack darlings.

Not bad for some kids from Borlänge.

Haglund dropped out after their first album, 2002’s Bring ‘Em In (EMI), went gold in Sweden and Japan, a standard which continued with 2005’s Hurricane Bar (Mute/EMI), while their latest studio album, 2009’s Give Me Fire! (Vertigo Be/Universal) climbed to platinum in Germany.

They’re sure to pack the Platz at Brandenburger Tor when they return to Berlin on October 2 as part of the Coke Sound Up Festival, along with Culcha Candela, Sunrise Avenue and One Night Only.

You recorded in Berlin with Juliette Lewis and Ray Davies on last year’s MTV Unplugged album.

Juliette Lewis was a bit of a dream come true. Ever since we were kids watching Natural Born Killers, we’ve always seen her as an icon for our generation. She’s a great singer, and she was the easier one.

Ray Davies was a hard motherfucker. He’s been through a lot, so he wanted to do things his way. He’s known for that.

Is it an acoustic tour you’re doing in October, then?

Not exactly acoustic. It’s, as they say, ‘stripped down’: more of an ‘empty’ sound than we usually work with.

Give Me Fire! was produced by Salla Salazar of The Latin Kings. You guys ended up doing a song in Spanish, and there’s a definite Latin influence. Would you say that’s Salla’s touch?

I think in that way producers are a bit overrated. When it comes to us, we always have the ground ideas and we try to develop them. Even before we had a producer, we wanted to make an album that had a lot of variation. It was a little bit like if we would make a perfect mixtape.

So… no influence from Salazar?

He’s a great guy – we’re starting a new project together in the next months. It was good to work with someone who hadn’t worked with rock music before. The people that have been working in the genre for a while have heard everything. They’re a bit tired. He’s a hip hop producer, and he showed us new sounds, things we’ve never heard before: a lot of weird stuff. It was inspiring.

Mando Diao has had a lot of member flux – Daniel Haglund left in 2004. Would you say that this current incarnation is The One?

Daniel is almost like a band member again; he’s going to play with us on the tour in October. But it’s different with every song. Some songs have the whole group playing; some songs just have two or three instruments and vocals.

There shouldn’t be any rules that every member has to play on every song. You do what’s best for the song. That could be having just a drum machine or a vocal or whatever. It should be a free thing.

That’s how everybody wants it to be in this band. I think that was the way a lot of bands worked. For instance, Depeche Mode. I’m sure they did whatever they felt like on their songs. With The Beatles it’s much the same. They released “Yesterday”, and it was a string orchestra and Paul McCartney’s voice. It wasn’t the whole band playing but they still called it ‘The Beatles’. It was still as much The Beatles as the songs where all of them are playing.

You and Gustaf go back a long time. You once spent six months cooped up together, writing music.

We’ve been friends for 15 years, and we work better now than ever. He’s like the brother I never had. We skipped pretty much everything else – school, girlfriends – we just wanted to do the music. It’s almost like a cliché but that was really the way we did it. He has his farm up where we are from, we go work there sometimes.

When we’re in Stockholm, we share a studio with a couple of painters and artists. It’s a great vibe. I couldn’t live without it now. I don’t think any one of us would survive alone. We’ll see what happens, but I think we’re going to work together as long as we live, pretty much.

Still, you did a solo tour once.

It wasn’t really meant to be a solo tour in that way. It was meant to be a guy playing songs. The booking agency wanted to promote the tour as “The Björn Dixgård Solo Tour”. I just let them do what they felt like. I didn’t play my own songs. I played Mando Diao.

You moved from EMI to Universal recently.

That was a good move. You have to work with people who understand your music.

Did you feel that EMI didn’t get you?

We don’t let so many people into our music. We do the music the way we want to do it. We don’t let any producers or people like that have a say.

Some have said that with your rise to fame the band has moved away from its garage roots.

I’d say we’re an independent band. I never thought we were a garage band. Not by purpose anyway. What does that even mean? Is it a sound? Garage to me is doing things yourself. No matter how it sounds, you do it yourself or with somebody you pick. That’s the band we’ve always been, and we’re still going to be that.

I guess maybe the first record turned out that way because of how it was recorded, on a portable recording machine. Everyone was asking us if we went to a studio. We did, we just didn’t know how to record. I still don’t think we know exactly how to record; we’re just lucky sometimes, you know? [laughs]

So what would you be doing if the whole band thing hadn’t worked out?

There’s no good answer cause it’s my only fucking talent. I would probably be… I don’t know. I’d be dead, man.