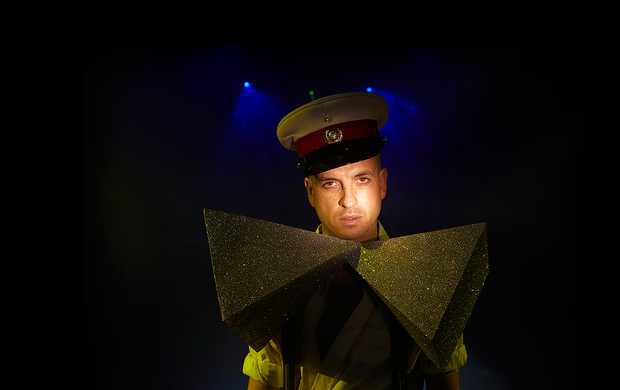 FROM THE ARCHIVES. Matthew Herbert (also known as Herbert, Doctor Rockit, Wishmountain and Radioboy, among other nom de plumes) is no ordinary DJ/remixer. He’s coming to HKW on May 31.

From his first performance in 1995, using a bag of crisps as an instrument, it was clear that Matthew Herbert (also known as Herbert, Doctor Rockit, Wishmountain and Radioboy, among other nom de plumes) was no ordinary DJ/remixer. Constructed from sounds sampled in situ, fascinated with incident and accident, and adhering to the rules of a self-penned, Dogme 95-style manifesto, Herbert’s soundworld has always been an implicitly political and environmental one.

Releases such as 2001’s Bodily Functions, as well as a slew of remixes, gained him wider recognition among the instigators of Microhouse. Later, on Plat du Jour (2006), he explored the industrialized soundscape of modern food production. Never one to be constrained by the limitations of genre, his latest release, There’s Me and There’s You (2008), is The Matthew Herbert Big Band’s second – and its ingredients are typically surprising.

Your work is characterized by the use of sampled sound and field recordings: there seems to be an underlying concern with authenticity.

I think that that concern arises directly in proportion to the lack of authenticity that exists in life in general. We live in a society that insists on the replication of bogus ideas of authenticity. I’m thinking, for example, of Frankie and Benny’s New York/Italian chain of restaurants, or Starbucks with its faux affections towards Italian coffee history. Our society seems intent on pursuing a one-dimensional approach to the interaction of things – we are taught that we express ourselves through consuming, that’s how we are successful, that’s how we keep the economy stable.

I think that the need to navigate through this mess forces me into a position where I want to experience things for myself, I want to question my own privileges and I want to have a measure of understanding that I may not have had before I started making the record. So, for example, on this record I went to landfill sites and saw where my shit was dumped at the end of the week. And on a previous record I went down the sewers in London near Blackfriars Bridge and quite literally saw where my shit went, saw it floating past and recorded down there. The brilliant thing about sound is that authenticity is incredibly easy to capture.

You do, however, use these sounds in quite a representational, metaphorical way – striking a single match to represent a hundred lives lost in Iraq, for example.

Striking a match in the House of Commons, for me, is a very different experience from striking a match at a petrol station, or at my child’s birthday party. The context provides another layer of meaning that I can infuse it with. On Plat du Jour, for instance, I took an apple pie that was baked by someone who worked at the Foreign Office, someone who used to work for the C.I.A. and reported directly to Nixon, and shot it with a Nazi Luger from 1939 at Manassas – the site of one of the first battles of the American Civil War. So all these layers of accident and coincidences of meaning build up and add to it. That’s really what music is for me: the transformation of sound from the literal into the metaphorical or emotional.

Sometimes you’re not allowed to attempt your explorations.

It was such a defining moment for my career when I was trying to get access to the House of Commons and they denied me because they were worried about how a piece of music might challenge or undermine their authority. Many musicians don’t think they can challenge authority through music, but the politicians were quite scared of it.

Death and the body are recurrent themes in your work.

I guess I feel like an adventurer in sound: I’m hearing sounds that no one has ever heard before and as a result you start to think about the outer limits. Leaving aside, say, the sound of a dead parent’s laugh – those incredibly intimate stories – if it was something public, then you would start to think about sounds that were socially or historically pertinent, so you might think of things like the sound of the Twin Towers collapsing on 9/11, things where it became about life and death. Actually, on the new record, I have the sound of someone being cremated, so I feel that I have gone almost as far as I can.

Past the body into ash.