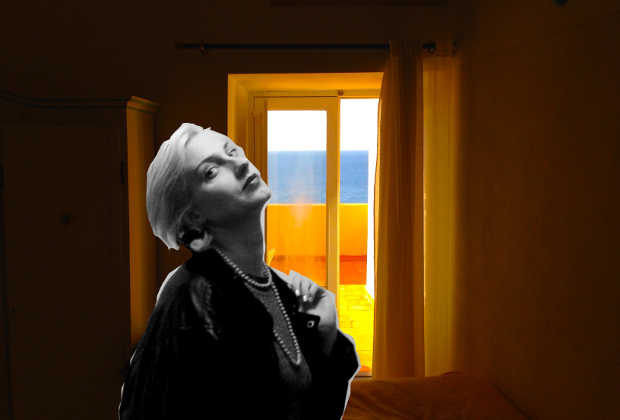 Berlin-based fave and international darling Molly Nilsson is back with her seventh and newest album Imaginations. The Swedish singer takes her newly optimistic and dreamy sounds on an Imagine Summer Tour around Europe with The Beat Escape and hits Berlin on Monday, July 24 at Internet Explorer and Sunday, July 30 at Marina di Neukölln.

So what is the concept behind Imaginations?

I like to name my albums something of what I ask the universe. I really wanted to ask for myself and for the whole world to have more imagination. It’s all about questioning reality and how it’s served to you. It’s very easy to keep focusing on negativity because it’s just kind of what the system wants you to do. So I’m trying to share the feeling of optimism and how right now things feel really turbulent.

What was it like for you to work on an optimistic record?

The creative work, it’s just fun. It’s just what I want to be doing always. But I think this album was maybe the one I struggled the most with: there was a lot of frustration in it and in the whole process, because I felt like it took me so long to make it and I am very sort of restless. At some point, even before the album was out, I decided to start working on a new album just to move on. I think it’s very much of an album that’s taking me in a new direction and I don’t really know where this direction is going to end up, where this will lead me. But it’s a very exciting thing because it’s very much like this year, I feel it’s changing a lot of things that I was taking for granted or we are taking for granted. So it’s very exciting.

At the same time, the songs of your album are quite melancholic and nostalgic, but still not sad. It’s retro and modern at the same time, and it’s also very dreamy. Can you tell us more about your universe?

I make the music that I would like to listen to for myself and I think for me, the music, all the songs that I’ve made make me really happy. Sometimes if I record music and I find that a song is just a little bit too sad, I just can’t record it. It just doesn’t interest me, sad things, because I always wanted it to be something fun. If I’m thinking about something tough I always throw a joke in there because there always has to be something that breaks the feeling. So I try to always work with contrast which is what I like the most.

Do you see your work as political?

I always saw myself as sort of an outsider and an underdog, which is very interesting when you then become a little bit more successful, because suddenly you start feeling like “maybe I’m an overdog”, maybe “I’m an insider now”, or maybe this is how people see me. So it’s a question of identity. But I do think, my way, my approach, and the whole DIY, being outside of the system and against the establishment, is a political thing.

You never talk about Sweden, your homeland. Do you miss it or is Berlin the place?

I don’t really miss anything. Even If I leave Berlin, I don’t miss Berlin much. But Berlin is definitely my home by now. I grew up in one city, in Stockholm, but then I think I also in a way grew up in Berlin as an adult. It’s were I’ve had my entire adult life. If I would say something about Berlin, its reputation or personality, I would say it’s a tough person, but who’s very friendly. I really like that, that there is something subversive about the personality of Berlin, like a protest. That’s something I really appreciate.

Your concerts are known to be very intimate. What is on your mind when you are all alone on stage? How would you describe your relationship with your fans?

In a way, I find that I’m very much there and in another way, I find that I’m not there. It’s kind of like I’m dreaming. I really enjoy the meeting: being on stage and looking out, meeting the eyes of other people and having the feeling that there is something very intimate although in this sort of big space with lots of people. It makes me really proud of humanity.