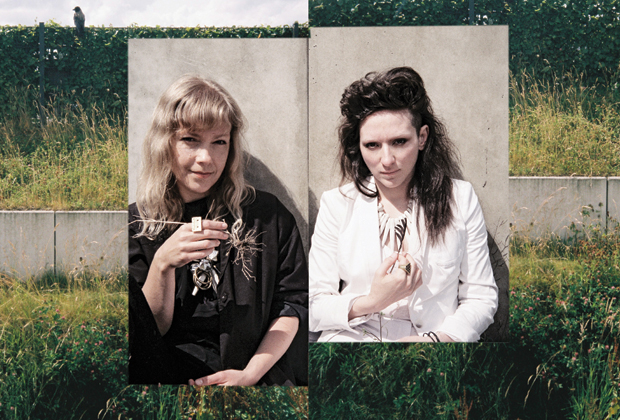 I met Shara Worden a couple of years ago, though I had been familiar with her music and had long been intrigued by both the tenderness and seductive power of her voice and the immersive and unusual instrumentation of her albums. For someone to shift between classical influences and complex pop music so effortlessly is really quite rare. At the time, I didn’t know that she worked with musicians that I would be collaborating with too, that we would perform together and, inevitably, become close. She has a new album out (This Is My Hand, on Asthmatic Kitty). I’ve got a new album coming out (The Trail, on Sinnbus). We play with the same drummer. She wears my amulets. I’ll be seeing her again when she performs at Postbahnhof on Oct 22, and I hope that you do, too.

SHARA WORDEN: You named it all. But this is the subconscious, not the intentional. It’s like being inside of a house and you know that there’s an ocean outside and you haven’t seen it or haven’t been in the water, but you believe that it is out there. And maybe this album is about opening the door and getting outside of the house.

SW: The title This is My Hand was the desire to deal with the body as subject matter. I wanted to write a dance song, but in order to do so I had to reclaim the body from myself.

MK: The topic of the body, in particular, seems key to the album – there’s way more rhythmic elements, even marching band instrumentation. How did the record start for you?

SW: The way that it started was with this book, that [drummer] Earl [Harvin] gave to me: The White Goddess from Robert Graves.

SW: Yeah. It is about the old bards and storytelling through song. Then I also read The World in Six Songs by Daniel Levitin. He lays out the six themes of songs throughout history and, at first, that became the structure. I knew I wanted to start with rhythm first and Earl played for, like, forty-five minutes during a soundcheck all by himself and I secretly recorded him. I told him later. [Laughs] So, the song “Resonance” came from that secret recording. And later he sent me some improvisations and I wrote over that. So, I started to record and then think about these six themes: war, religion – which I took as shamanism – love, sadness, friendship and information songs. And then I was just filling in the blanks: moods, feelings, colours. Talking about shamanism, your art feels very ritualistic to me.

MK: Well, in the music I am more about trancing myself out; I can easily just play a certain chord all the time. Round and round.

SW: It’s very earth and spirit at the same time. I talked to a friend about [My Brightest Diamond’s new song] “Lover/Killer”. For some reason, I couldn’t get a lyric on the chorus of the song. It was different all the time and I never even remembered it myself. [Laughs] Then just started to sing the words, “Billet spied boats sped/across the field crows fled” over and over again. And worried about whether you can do that. And my friend said, “Shara, you need to think of repetition like a child. We just do things over and over again because they feel good. You don’t need any other reason.”

MK: It’s an interesting question, since you can look at the ritual as a sequence of actions repeatedly and intentionally performed, devoted to an inner/outer belief system, expecting it to create a certain effect. As for the arts, I started to involve a certain aspect of ritual when I got deeper into creating amulets. At some point, I chose to ritualise the work process, as they are custom made for each person and I wanted to see if the focused attention on the process could change the outcome and the perception of the piece. And I was really surprised that it does. You, on the other hand, are using masks and costumes a lot.

SW: Yes, I find that something like a mask – a physical or a metaphorical one – makes it possible to be more vulnerable and to be more myself than without. And I think it’s ultimately about finding that device that makes you feel comfortable enough to dare to show yourself.

MK: Sure thing. It’s not a mask to hide behind; it’s a character that allows you to show more of yourself, one that answers to different rules and structures, a magnified and maybe even more precise version of yourself. I usually put myself in the place of everyone involved in the scene that is going on in my head. When I was writing the songs for the album, I was really into Flannery O’Connor, whose characters always mean well but gravitate towards their downfall and usually only experience transformation or salvation through pain and violence.

SW: I was scoring this Buster Keaton film where he is getting into all this trouble with his lady and he is mucking everything up. He is getting everything wrong and he gets more and more frustrated and she gets so mad at him.

SW: And I thought about being an innocent person but getting accused. So I thought, “I am writing for this Buster Keaton film, but it’s actually a song about Guantanamo Bay.” I tried to be a voice in the tone of the prisoners and played the song for about a year that way, but I felt like the story wasn’t working. I liked the music, but I didn’t like the way in which it was sort of trying to call out the government. Then I changed the perspective to myself, made myself the person in the prison. And then the whole chorus changed and it worked.

MK: That would be This is My Hand’s “I Am Not the Bad Guy”. Calling yourself “My Brightest Diamond” is yet another mask to not hide behind, isn’t it?

SW: My Brightest Diamond was about a person who died. I had this vision of this person that love is like heat over time and space. It’s not like a feeling; it’s like where this person is felt in heat. This relationship was such a gift, this beautiful diamond that I had to hide in my pocket and couldn’t tell anybody about it because it was too special and too rare and too amazing and if I told people I couldn’t really explain it. Or words would be too futile to describe it. And then I was looking for a name and I thought, you are this diamond that I carry in my pocket. “My Brightest Diamond” was my name from then on.