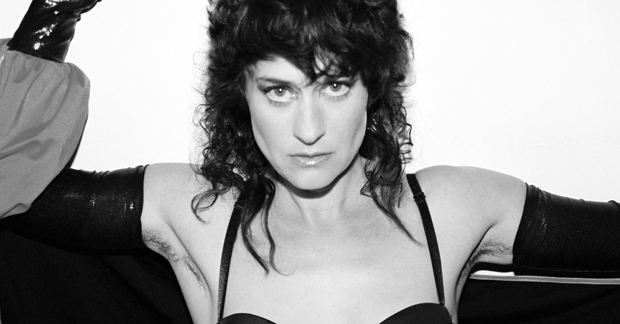 The transformation from coffee shop folkie and kindergarten teacher Merrill Nisker into the throbbing, sexually uplifting, unshaven electro-punk persona that is Peaches (her sobriquet was lifted from Nina Simone’s moving, if kitschy, ‘Four Women’) stands out in today’s landscape of producer playback acts. Raucous, shameless and explicit, Peaches’ very being is a reaction to the Britneys of this world – a shout out against their “fake honesty”, their sterile, Barbie-doll femininity.

As if out of nowhere (or Montreal – close enough), mid-thirtysomething Peaches arrived in Berlin four years ago with her buddy Chilly Gonzales, mucking around in the avant-garde while lugging a finished album on her lap-top that landed her a deal with indie label Kitty-Yo (at the time a Wohnzimmer for quiet young men in cardigans). P+G were soon enough the Olsen Twins of the Berlin underground – and then Peaches’ first album The Teaches of Peaches became THE catwalk soundtrack of the year 2001, clearing 50,000 copies in the US alone.

Fatherfucker, released late last year (2003), was a hermaphroditic tour de force – suddenly Peaches was on the cover of every style magazine of the Western world. And with her help, the dirty, electronic cabaret style of the Berlin underground has caught quicksilver the attention of London and New York. But she still loves the city in which she can regenerate between tours, disappearing into the crowd.

In your songs, there’s so much sucking and fucking…but there’s not much mention of love. Sex seems almost mechanical. Peaches, are you a repressed romantic?

I’m not really a romantic, but sucking and fucking is a part of life. It’s not mechanical, it’s just really direct. It’s more like taking the hip hop view of things. I’m not a romantic in my music in the same way I don’t like Celine Dion songs. They’re about ‘fake honesty’, and I was reacting to that kind of stuff, to this fake sort of romantic night. In the end, what it’s really about is getting down with the person, so why get all romantic about it? Love is a different thing.

The second album is more about gender and the roles of men and women. “Shake your Dicks” isn’t about having sex, it’s about shaking dicks and dancing. It’s like “Shake That Ass”, a booty song, you know.

Do you want to piss people off?

No, exactly the opposite. Guys should know it’s okay to shake your dicks. They tell women to shake their tits and ass all the time. They can join in. Everyone wants to see two women kiss; two guys can kiss, it’s no problem. I’m just trying to open things up a bit. If people get pissed off they need to look at themselves.

A customer review of your new album on the Amazon website said: “Pick up Peaches’ Fatherfucker and listen to what liberation sounds like.”

The first thing I wanna do is make people dance and sing along. I want it to be music before liberation, because you can’t actually do anything if the music isn’t good. If you have the goal of liberating people – changing something – but you do it in the way that the music is not accessible to anybody, you know…

There are a lot of people that I respected in the past that have made great, strange music, but mostly what I remember was the politics of the music instead of the actual music. So to me what’s important is that people like the music and that they sing along. And they realize what they’re singing along with. Then there’s the liberation thing, there are these big black guys singing: “I want girls and I want boys” or “back it up, boys.”

They find themselves singing something they would never say.

Exactly. It’s kind of how I feel about rock ‘n’ roll. I always sing along with rock ‘n’ roll lyrics, things like “I’m a back door man.” I’m not a man. I’m not a back door man. Why am I singing “Biglegged woman ain’t got no soul”? All these Zeppelin songs, why am I singing along with that? And with hip hop, why am I singing “Baby Got Back.” So in a way, I’m singing away because the songs are cool, but I’m thinking these lyrics suck, for a woman, or whoever. That’s why I make sure the music’s good and the lyrics are an alternative.

You once said you had hermaphrodite envy. What do mean by that?

Why, wouldn’t we all like to be a girl and guy for a day?

At the same time?

Not necessarily at the same time.

But it’s also about the roles. If you look at the title of my album Fatherfucker, first of all it’s taking “motherfucker” and switching it around. It’s not rocket science or anything like that, but it’s really confused a lot of people: they think father figure, I’m making fun of Christ, I’m talking about incest, all these things.

Was your father offended by that?

No, he thought the beard (on the Fatherfucker album cover) was really cute on me. I think that people’s ideas of what is a man and what is a woman are really antiquated. When people see hair under my arm, it’s all shock and taboo again, which is silly. Or when they see me on stage and think I’m trying to be like a male rocker. But I’m just giving energy, you know.

When you think of Peaches these days, you think “hairy.”

Well, you know the hair thing, it’s still taboo. I wore those shorts and someone saw a little bit of hair and they got really freaked out and I thought oh, well, I’m not going to shave there, what’s the big deal? It’s just a matter of whatever comes out and what biases come up there. All of these things just came in the experience of playing and writing and people’s reactions to it – I’m not really so much out on a mission.

In one of your videos, everything gets overgrown with your pubic hair…

It was fantastic. He was really nice, and he wanted to work with me – he met me and covered one of my songs, “The Teaches of Peaches” for his album. Then I asked him to be on my album, so I wrote a song for us.

Do you think you can change the way the music industry works?

I think, that by me being accepted, there’s now a category for that, for people not being afraid of being direct if they want to. It’s not about being romantic – it’s about saying what you want. Look at popstars now: Christina Aguilera and Britney. They’re trying to be that now, trying to be all dirty and getting down and getting away from this romantic thing.

So do you think Britney took a cue from you?

I don’t know. I know they’ve heard of what I do. But, whatever. I just think people are getting sick of this “fake honesty”. Like women are in this role and they’re supposed to be this way. It’s not true.

You’ve lived in Berlin for four years. Do you think you could have achieved what you’ve done in any other city?

I made the first album in Canada, you know. And it seems like it was an opening for a lot of people to do this kind of playback or electro stuff, or whatever. When I came here I got a deal on Kitty-Yo, which is a small label, but once London started taking note of the music from Berlin, then New York, there was kind of like a new exoticism of being somewhere else. And now I’m on an English label.

So you don’t see yourself as a Berlin performer, really… How much do you feel a connection to Berlin?

I do have a big connection to this city in terms of like when I came here. I love Berlin, and I’m really happy I moved here. When I came here there were a lot more people that were doing the kind of thing that I was doing, or starting to do it, than anywhere in Canada. It’s created a really fantastic community. There definitely is a connection that way. But in our own little bubble world, you know.

Do you have a favorite band in Berlin?

I have lots of favorite bands in Berlin.

Which ones do you really think are doing interesting things?

Well there’s this band that I’m taking on tour with me, Kissogram. I think they’re fantastic. And, of course, Cobra Killer and Electrocute, Boy from Brazil, Stereo Total, Taylor Savvy, Jamie Lidell, Kevin Blechdom, Mocky, and I would be disappointed if you asked me that question and didn’t print every single one of those names.

Do you see yourself sticking around here?

Yeah, I love it here. I like that there are no weird time structures, like “ooh, we better go out because everything’s going to close at two” – that’s the way it is in California.

What do you hate about it here?

More just me not being able to speak German. I would love to learn, but when I come back from touring I have to just hang out. Does it help you somehow to live here as an expatriate far away from home, cut off from the culture? It’s not really so different…we’re in our little bubble…people come from all over…people have chosen to live here because it’s cheap, or it’s lazy if you want it to be, or it’s anonymous or you can go out all night. I think it’s just a more relaxed environment to live in than America or Canada. Especially right now…

As we asked Die Türen: who does your haircut?

Me. It’s not a perm – it’s just how my hair is. Curly hair isn’t very fashionable, people always try and straighten their hair. You can look through 10 magazines and you’ll find the curly-haired page, but besides that it’s all straight. I’m trying to show a sexuality that is honest, that’s just the way a person is. Everybody’s sexual, not just if you have blonde hair and big tits. There are tons of different ways to be sexual. I’m just trying to be me, why don’t you be you?