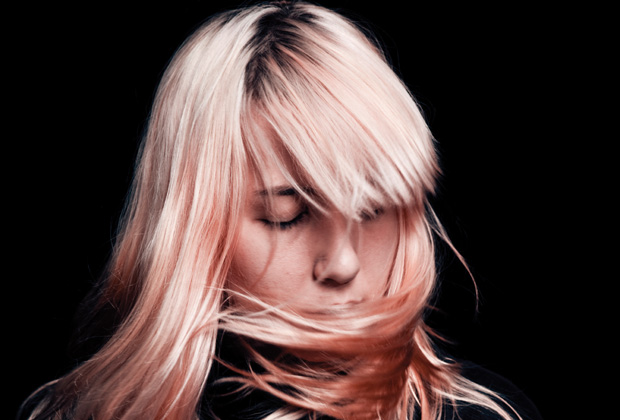 Austra’s Katie Stelmanis may have commenced closer to Wagner than witch house, but nowadays she heads a fully-regaled outfit that lands somewhere in the middle and outside of both. Signifying “goddess of light” or, alternatively, Stelmanis’ middle name, Austra, coming off the hipster totalization of their single “Beat and the Pulse”, have spent the past half year touring and perfecting their still-raw live show. They’ll blow on your hangovers New Year’s Day at Volksbühne.

Your background lies in classical music and opera. What made you break away? Did you experience a kind of musical ‘coming of age’?

Yeah, that was pretty much it. I went to my first punk rock show when I was around 18, and it was a kind of surreal experience for me, because I’d never really listened to that type of music before. But I was just blown away by the wall of sound, the intensity of the guitars and amplifiers – I just loved it.

Is that something you actively try to do – incorporate different genres together in your music? Austra sounds almost goth-y at times, then electroclash, then witch house.

I think it happens naturally. I’ve dabbled in so many different genres. I studied classically, [drummer] Maya [Potepski] and I were in a kind of punky riot grrrl band when we were younger. I’ve been in folky bands.

I’ve always worked with electronics – since I was 19 or so. I originally started doing that because I wanted to create orchestral music, so I was using orchestral samples. And then I started to change my ideas over time.

Austra kind of happened naturally, too. I was performing as a solo artist for a long time, but throughout all of the touring I did, Maya was with me so we were working as a duo for a long time, and then we started working with [bassist] Dorian Wolf about two years ago, and as we were writing the record and recording the record it became clear that it was more of a collaborative effort, and it didn’t make sense that it was under my name anymore.

Were you pleased with the finished album? I read a review on NME that said it “erred on Evanescence balladry”.

I know! That was really annoying, actually. Yeah, I was happy with the record.

It was interesting because, really, the record was like four years in the making. Just because it takes so long to figure everything out, like getting a release and finding the funds to record and recording and figuring out who to record with – it just took years and years. I feel like, because it took so long, we were reliving these songs over and over again. We were re-recording and rearranging the same songs for years. I feel like I never really felt finished. I never let them sit; I never let them rest.

Why did it take that long?

It was purely logistical. I put out a solo record at the very beginning of 2008, and I’d already started writing material for the next record then. I mean, I toured for years and it took us a long time to really get a name and to get to a place where record labels actually wanted to talk to us. It took ages to find funds: we applied for a bunch of Canadian grants to record a demo.

And then we went to SXSW, and then Domino heard our demo, and then we had the option to record the album properly, so we recorded it again. But I feel like it’s fairly common. I’ve heard from a lot of different people that your first record kind of takes you your whole life, and then your second record takes, like, two months.

How did you find working with producer Damian Taylor?

He’s worked with Björk and Arcade Fire. It just made sense, us working with Damian. First of all, he moved from the UK to Montreal, which is really close to Toronto, which is where I live. I heard he’d moved there and opened up a studio and was looking for Canadian bands to record, and it just seemed like a no-brainer.

He specializes in electronic music, and there’s not a lot of producers and engineers in Canada that do that. And, of course, he had worked with so many artists that I’d idolized my whole life. Björk is definitely an influence – I’ve been listening to Björk since I was really young.

So, there’s your song “Young and Gay”. To what extent is Austra a “gay band”?

I wouldn’t call it completely irrelevant, but I wouldn’t call it the main focus of what we’re doing either. I mean, like, we all kind of identify – there are six of us performing in the band now. It just feels like a collective.

You’ve described opera as a “heterosexual world” that you didn’t feel comfortable in.

When I was 18 performing in opera, basically it was like two different worlds. I was either playing guitar in my post-riot grrrl band or I had to put on a floor length gown and perform in front of 300 other people wearing floor-length gowns.

The gowns came off in the video for “The Beat and the Pulse”. It was censored by Youtube.

Well, we expected it to happen. I didn’t even wanna put it up on Youtube, to be honest, because I think the censored version of it is kind of dumb, but we had to – our label really wanted us to – so we did it.

I think it’s a very clear depiction of where North American values lie: there’s so much hateful stuff on there, you know, there’s racist, violent, hateful material that doesn’t get censored, and it’s just interesting that female nudity is seen as unsightly. At least it’s on a French site, and I’m glad they didn’t censor it, which is to be expected by the French!

You have a really big fan base here in Berlin. Your show at Berghain was packed before you had an album out.

To be honest, I hadn’t really spent much time there before we did that show at the Berghain. But I do think Berlin caters to artists in a way that no other city does: I’m actually going to be in Berlin for a few months in 2012, writing, because I found a really cheap place to live. It makes sense: that’s why I think Berlin is ideal.