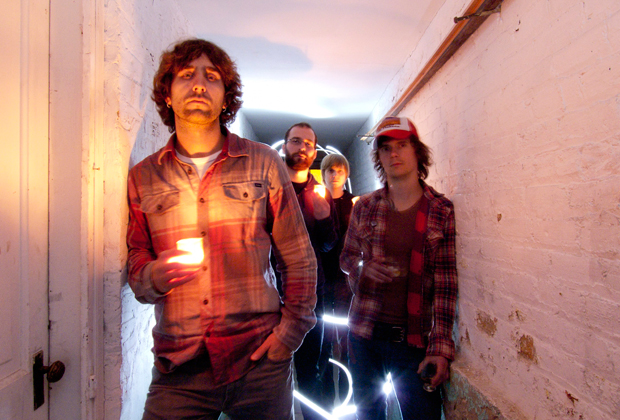 The new record is based around a psychic splitting.

The whole idea with the names that we use and everything was kind of like a dichotomy-type-of-thing: the one side of the record, Ataraxia, means maintaining peace-of-mind, and then the second side of the record is Taraxis, which is kind of the opposite of that. The dichotomy goes down to the actual names of the songs, too. There is a whole, like, esoteric philosophy about living your life with the least amount of impact and stuff like that, which is the philosophy behind the first song, “Ataraxia”.

Do you think Pelican stands behind one philosophy?

No, not really. We kind of make it up as we go, we just do it as it comes, you know. The ideas for the records always come from the moment and what we are kind of feeling right then.

Pelican doesn’t really fit into any specific genre: you’re too thunderous to be heavy but too fluid for doom.

We have always kind of been all over the place. The four of us all listen to very, very different music, but we all appreciate each other’s tastes. That has been the way it is since we started, so all of that, all of our interest and stuff has really come out in the music. At least I hope so.

To add to the confusion, you now live in different cities.

It has been working fairly well, so far. [Bryan’s brother and Pelican drummer] Larry and I moved back to LA about five years ago and I recently moved out to Chicago. Luckily, we have the Internet, which makes it easy to bounce ideas back and fourth. We meet up every once in a while for rehearsals and recording.

Do you write your songs on Skype?

No, we haven’t tried that, but we have used it for spinning ideas back and forth, yeah.

Why the move toward electronics?

It’s fairly new to us but I think there is going to be more of that. There wasn’t really a decision made; we have just always been really open-minded with trying new things, like on the last record when we had a guest vocalist [The Life and Times’ Allen Epley]. I guess I was listening to a lot of post-punk – Wire, New Order – and that is probably where some of the electronics came from.

Do you plan on integrating them into your live shows?

Not really, but that would be nice.

What did you think about critics, in particular Pitchfork’s Grayson Currin, ripping on your brother, writing that the drummer was holding the band back?

I think he was really unprofessional and there was something personal going on, with the band or whatever, that he brought out in his writing. So I don’t know what that was all about. I think he has pretty bad taste in music to begin with, so was I surprised that he could rip my brother apart so bad and then give an experimental record that just sounded like noise a great review. I didn’t understand that whole situation. It was a really irritating thing; at the same time, we just thought it was shit.