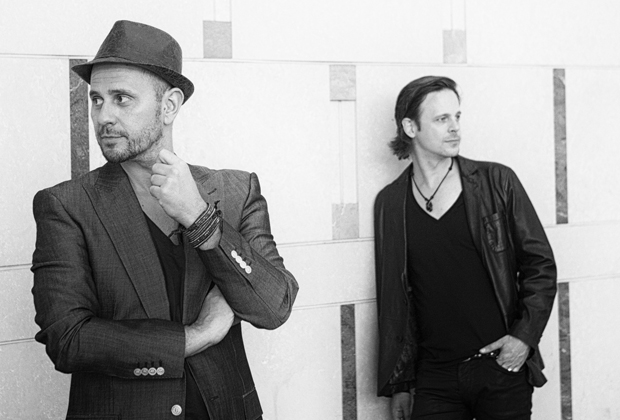 Five albums in, we find Booka Shade sitting comfortably on the tech-house couch with their feet up on the rock star ottoman.

“Body Language” and “In White Rooms” were mid-2000s classics, and the duo’s 2013 Coachella headline spot is a long way from their humble Frankfurt synth-pop scene beginnings. Arno Kammermeier (left, drums) and Walter Merziger’s (right, keyboard/synths) latest album, EVE (Blaufield) represents a much-anticipated throwback to their emotional sound, with more hooks than you can hang Arno’s collection of bowler hats on. Get all loved-up at the aptly named Electrified! on Friday, March 14 at Flughagen Tempelhof.

Walter Merziger: We never knew what a hit was; it took a long time for people to convince us to release “Body Language” as a single, and we thought “In White Rooms” was boring and we wanted to drop it. But then our manager said, “You’re crazy, it’s one of my favourite songs on the album!”

I think the coolios had taken too much ecstasy and that’s why they came to us. It was just a contra-wave to the very dark techno around at the time: no melodies, just like [Aus’] “Strobo”. People had had enough and wanted an alternative.

That’s why people like Chicken Lips came back with a more positive sound. Retro disco, a little bit more funky, groovy; not like these Teutonic beats. That was the perfect time for us to start, because we have this sexy beat and our music is more female than male, more positive than negative.

WM: One of the first times we played in the States was in Los Angeles. We played in a bar, in front of guys with cowboy hats, and they were like, “Huh? What is this here?” But now you don’t have to explain any more what a DJ is and what electronic music is. These days, it’s more about the production around them and their LED hat. They’re not like musicians in the normal sense: it’s a business. They’re in their private jet, then their Porsche, they arrive a minute before the show, go on, play the same set, little blinky blink…

WM: Don’t sweat. €60,000. Thank you. Next. Then, back in the car. They don’t drink alcohol, take drugs or go crazy. They just do their job. It’s a different approach. Rock bands are real music-lovers. I don’t want to say that DJs aren’t music lovers, but performing your own songs on stage has a different feel from playing records.

WM: We jump around. I have to admit that I’m always drunker when we DJ. When you play live, you have to be more focused. DJing’s easy. But, of course, they get the same treatment as other stars. If you can fill a stadium with 70,000 people, people lick your ass.

AK: Well, in a way, I find David Guetta, for example, very credible. We met him so many times, and he’s such a great character. You can never be so successful if you don’t like what you do. There are also some producers where I don’t like the music but I have to accept the fact that they must like this very much. Motörhead go on stage and say, “We are Motörhead, and we play rock ‘n’ roll every night.” It’s the same for us: “Hey, we’re Booka Shade and we have a sound.”

You kept on the edge of breaking up for years. How did you turn it around?

WM: We had this great experience at EVE Studio in Manchester. We felt like a band again, as it was the first time we really had musicians playing. There was brass, guitar…

AK: A lot of the percussion we played ourselves. Although it was cut up and fine-tuned on a laptop, the performance element gave us a different connection to the music.

WM: Without that, I’m not sure what would have happened. We weren’t going to split up in the usual sense; we didn’t have personal problems. We just thought, “We’ve done our job, made people feel good, but now the story’s told and it’s time to move on.” But we’re happy we found the way back. Even if somebody tells us they don’t like it, we’re not as vulnerable as we were with [2010’s] More! [Get Physical].

How is this album different?

AK: All the craft, the love, the effort that we put into the music – it’s all there. We had an album finished a year ago but we decided it wasn’t good enough. We calculate in longer distances of time now; we don’t mind waiting to bring something out. It’s weird because life moves quickly, but if everything else is so fast, it’s more important to think about the longevity of what you do.

WM: Going on tour for 15 months doesn’t feel right when you have to promote something that isn’t 100 percent what you wanted to do.

AK: You’ve got to ask, “Is it really worth bothering people with this music?” We worked on the interludes between songs for a few months, because that was important to us. We recorded Fritz Kalkbrenner’s vocals for “Crossing Borders” two years ago.

How did you decide on Fritz?

AK: He has a very distinctive vocal sound which we like. It wasn’t like, “He’s hot at the moment, let’s choose him.”

WM: We did a remix for one of his singles, then he wrote something for us. We thought about it a lot, because the original concept was four hands, two voices. It seemed a bit obvious, the biggest Suol [label] star on our album. But if it’s good, it’s good. We probably have less of a chance to go with all the guys from the underground now but we don’t give a shit.

Only now you’re playing an airport. Will you try to get back to some club performances?

AK: We used to play at Panorama Bar and Watergate but the stages are simply not there anymore. For the new tour, it’s absolutely essential that we have the structures around us. We like the big feeling, the big gestures.

WM: If we would do more DJ sets, we would choose Weekend or Watergate, but not Berghain. In general, it’s not the place where we want to be. We don’t like so much the dark side – for  us it’s always this positive melancholy. Not too bright and not too dark. We never feel like Germans in that sense: we still play slow house music designed for a 50-capacity club in Frankfurt. We’re not the dark Berlin techno guys.