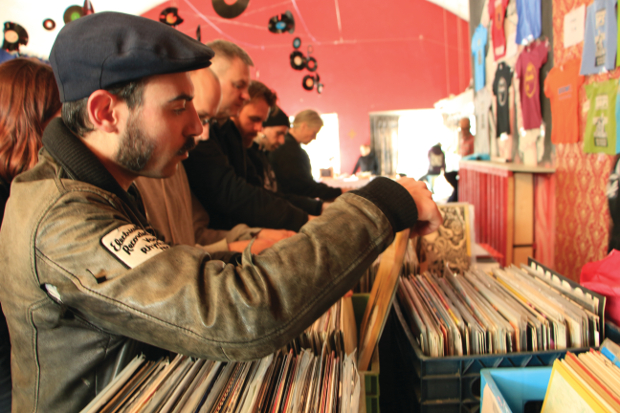 Records: they’re not just for hipsters anymore! Back when the first Record Store Day happened in 2007, the unwieldy format was just starting to make a return into the homes of audiophiles and Wes Anderson acolytes as a reaction against the sterility of the iTunes library. Now, albums from the likes of Adele and Kanye West are being pressed to vinyl with eager collectors snatching them up, €20-plus price tag be damned. Coupled with new vinyl producing factories around the world and Panasonic’s revival of the iconic SL-1200 turntable (for a whopping €4000), it seems the scene is back in mainstream rotation.

All along, Record Store Day has been pushing the Schallplatte with special releases in limited quantities shipped out to record shops around the world. For this year’s edition on April 16, that includes a glow-in-the-dark re-issue of Outkast’s “Elevators (Me & You)” 12-inch… as well as 3000 vinyl copies of the Justin Bieber single “Where are Ü Now”, flogged by “ambassadors” and masters of integrity, Metallica. (No wonder the real hipsters have been turning to cassettes lately.)

Several blocks away at the Record Loft by Kotti, stern-faced diggers flip through some 20,000 techno and dance 12-inches, smoking and taking periodic breaks to listen to their stack of selections. “The record shop is a cultural hub,” says owner Christian Pannenborg, who opened his official store in 2012 after running a semi-illegal one in a friend’s flat for years. “A record is a physical manifestation of culture. When you’re dealing with records you’re dealing with something that has cultural meaning – that’s not a joke! Records give people who don’t fit into the mainstream culture an identity.”

You won’t see Record Loft or Groove listed on the participating stores for Record Store Day – Müller and Pannenborg prefer to leave the corporate kowtowing to places like HHV and Dussmann. For Müller, Record Store Day is just a scheme masterminded by the big labels. “It’s a big business. You can make a lot of money on weapons, alcohol and music.” To order a complete stock of records from the Record Store Day releases, shops have to shell out over €2000 for records that don’t necessarily reflect the taste of the owners. “There’s an emotional connection to the selection your shop offers,” says Pannenborg, whose stock, an outgrowth of his personal collection, reflects the entire history of dance music. Compared with the seemingly random and pricey list of Record Store Day releases, it’s hard to see where they’d fit.

But the Berlin indie record scene has its own celebration in April: the second annual Underground Europe record swap and fair (April 29-30, Marie Antoinette) gives a space to celebrate the love of the outdated format and the music on it. From hardcore punk to industrial, garage to electronic and indie to thrash metal, independent collectors and dealers will be hauling out their crates for international record nerds to peruse and swap stories over. It’s moments like this where the true beauty of vinyl collecting comes into play – meeting and talking to actual humans, no Metallica involved.